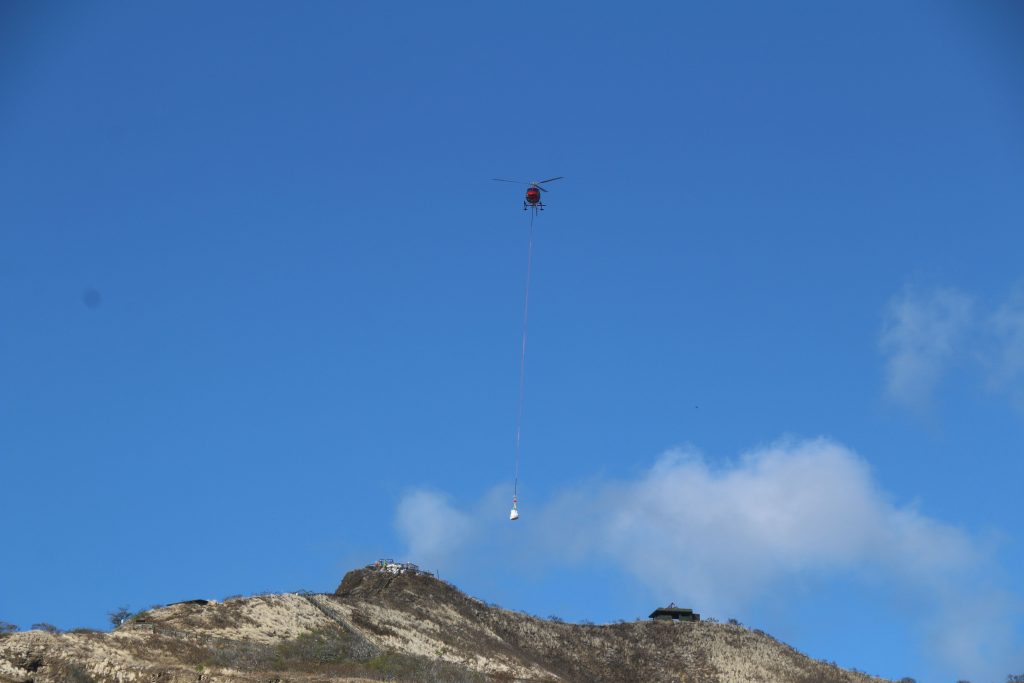 (HONOLULU) – Today, a helicopter made repeated trips from the top of Diamond Head to the crater floor, flying down sling loads of broken concrete and rebar. The rubbish is the remains of two structures that were dismantled this week on top of the highest military fire control station in Diamond Head State Monument. The structures had become a safety hazard as concrete was beginning to fall and visitors often tried to climb on top to get the best photo vantage point.

Most of the park’s military structures were built prior to the first world war, circa 1910, and left a legacy and infrastructure that remains in use today. The Mule Tunnel cuts through the interior of the crater and sees daylight on the other side above Montserrat Avenue.

“The mule tunnel had rails in it initially and the materials needed to build features at the summit were pulled along the rail line by mules,” recounts Alan Carpenter, Assistant Administrator with the DLNR Division of State Parks (DSP). That’s the past and now he wants to focus on Diamond Head’s future which includes the tunnel, now commonly referred to as the Kapahulu Tunnel.

It is one of two vehicle tunnels that enter the crater. Currently everybody comes through the Kahala Tunnel which mixes people with vehicles. “We’d like to spread cars and pedestrians out to make it safer for everyone, so we’re working on plans to reopen the Kapahulu Tunnel as the pedestrian-only entrance to Diamond Head State Monument.

Still several years from becoming reality, Carpenter envisions it, as a way to improve the visitor experience and their safety. “When you exit the tunnel, you have a magnificent vista looking up to the summit and the entire crater. People will pass another set of historic features along the way, so there are a lot of educational and interpretive values.”

Part of the planning will include the creation of a vehicle drop-off area, though DSP finds that many visitors walk from their accommodations in Waikīkī. In addition, the outside entrance of the tunnel will require a connector from the street.

Sooner, than seeing the Kapahulu Tunnel reopened, will be a new reservation system for Diamond Head State Park. Carpenter explained, “It’s kind of the trend now, another nod to adaptive management, to better control the flow of and numbers of people in high visitation areas like Diamond Head. We want to spread people out throughout the day as it can get crowded to the point of insanity at times.”

The park is one of the busiest and most visited attractions in Hawai‘i, due to its unique combination of historical, natural, and outdoor recreation attributes. The roll-out of the reservation system is expected sometime in early 2022.