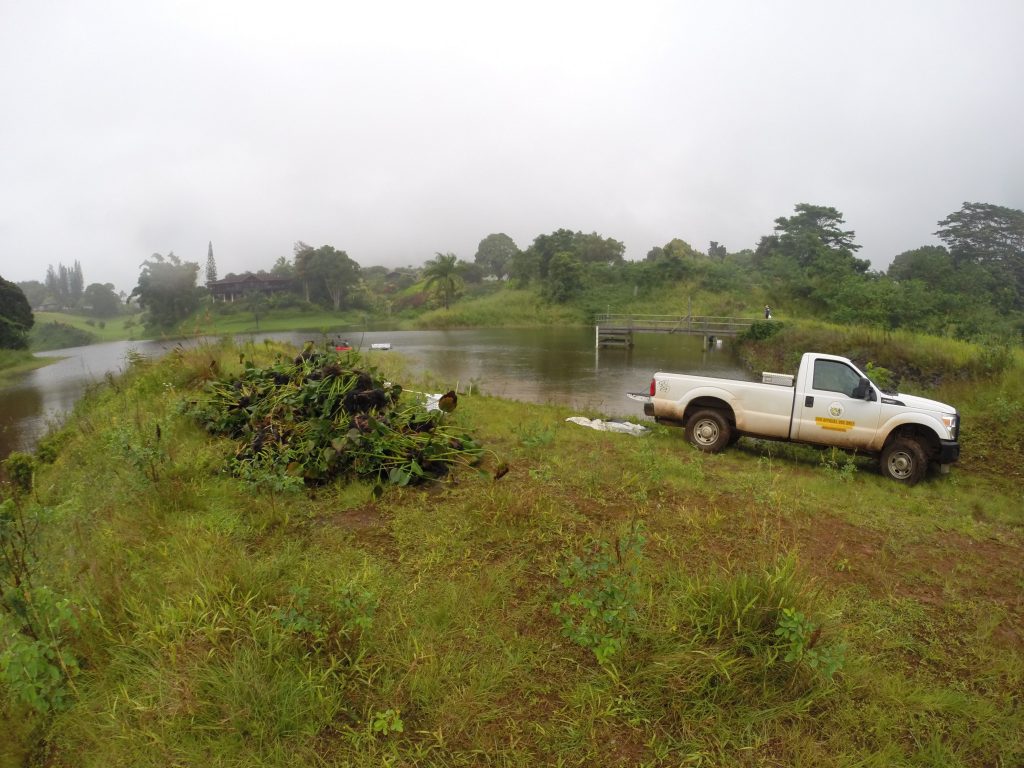 (Kapahi) – Yesterday, a massive pile of water hyacinth was removed from the Kapahi Upper Reservoir. A tip from the community alerted the DLNR Division of Aquatic Resources (DAR) to the appearance of this invasive species in the reservoir approximately one month ago. In response, DAR assembled a team to aid in the complete disposal of the harmful vegetation to prevent it from spreading to other waterways on Kaua‘i.

DAR Educational Specialist, Aaron Swink spoke on the importance of removing the water hyacinth, a plant not typically seen on the island. “We were wanting to try and remove it before we get the winter rains, and it escapes,” Swink explained. “You can see, already, we’ve got some up against the spillway getting ready to go somewhere else. So, we’re going to try and get rid of it before it spreads.”

The water hyacinth is a purple-flowered, decorative plant commonly used in ponds and aquariums. Unfortunately, due to its ability to free-float and propagate from tiny fragments, it can become problematic for places where floods can easily wash them into other waterways. Water hyacinth grows in patches on the surface of the water. Unchecked, these patches can form dense mats that choke out native species. It has cost governments and natural resource management agencies around the world millions, if not billions, of dollars to control.

The Kapahi Upper Reservoir, home to many native plants and animals, is attached to several natural water systems in the area. Swink continued, “This is on an irrigation system that’s connected to natural waterways and lo‘i fields. We wouldn’t want this plant getting out and into a farmer’s taro patches or into their ditches. And then, if it got down into the Kapa‘a Stream and into the estuary, it would definitely be a problem.”

For landscaping, instead of water hyacinth, DAR encourages people to use native sedges or wetland plants in their ponds around the perimeter. If a plant that sits on the water is desired, water lilies or lily pads are recommended, because they have a root that connects to the ground, making them less likely to float away.

While most of the water hyacinth was removed yesterday, DAR will return to the reservoir today to remove any plant matter that might have been missed in yesterday’s sweep. Swink elaborates, ”if we don’t get it all, we’re kind of wasting our time out here. So, we really want to give ourselves plenty of time to go through everything with a fine-tooth comb. As you can see, there’s a lot of dense grass and stuff around the edge. So, we’re going to have to search and find all the little fragments and pieces, because all it takes is one little plant and it’ll come back.”

Once completely removed, the pile of water hyacinth will be covered in a tarp and allowed to decompose for use as compost.