FOR THE SAKE OF NĒNĒ DRIVE WITH HOLIDAY ALOHA 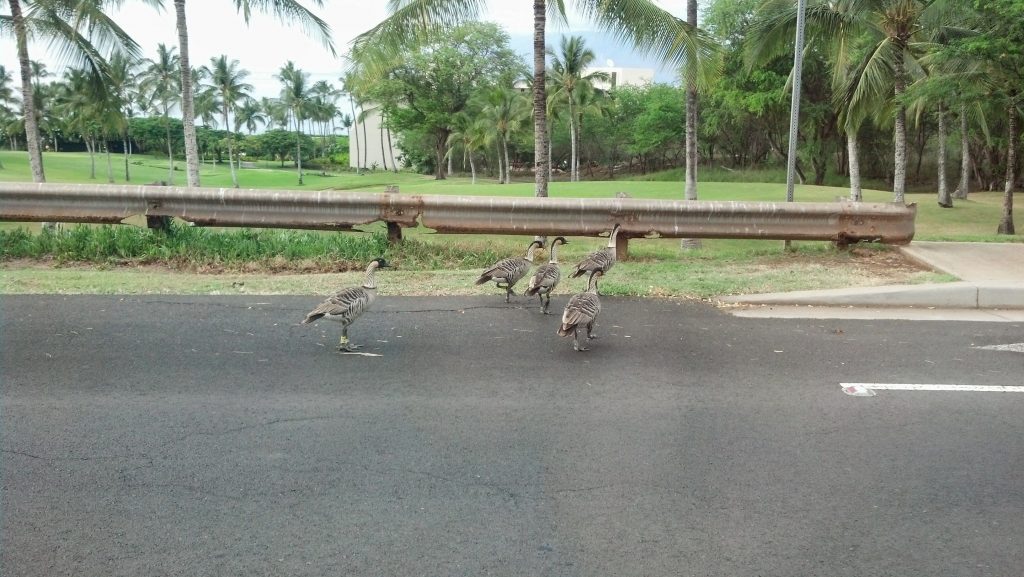 (KAHULUI) – Biologists with the DLNR Division of Forestry and Wildlife (DOFAW) are urging people to drive with aloha, now and during the upcoming holidays, and to slow down for endangered birds.

A bonded pair of nēnē, a male and female, were struck and killed by cars on A‘alele Street near the airport in Kahului on Tuesday afternoon.

A former DOFAW employee found the geese on the road. The female was dead, and the male died a short time later. The male may have been struck after the female, while trying to stay near its partner. Nēnē commonly stay close to their mates or goslings after they’ve been injured.

Nēnē nesting season coincides with the holiday travel and shopping season. Paved roads resemble lava flows their ancestors evolved on and their large size makes it difficult for them to launch into flight quickly. Nēnē adults and goslings may be crossing busy roads now through April. Adult’s molt and replace flight feathers at this same time each year and juveniles are not ready to fly.

Nēnē prefer grassy areas, so parks and golf courses are magnets for them. People can also protect this endangered species by keeping dogs leashed at beach parks and near golf courses, and by not feeding them.

Stephanie Franklin, a DOFAW biologist on Maui estimates there are about 15 nēnē in the busy core area of Kahului, moving between Kanahā Pond Wildlife Sanctuary, Kanahā Beach Park, and nearby grassy areas.

“We’re so lucky to be able to see nēnē and three other endangered waterbirds species, right downtown,” Franklin said and noted that privilege means an added responsibility to share the space with the endemic wildlife of Hawai‘i.

Unique to the Hawaiian Islands, nēnē were on the brink of extinction with just 30 birds on Hawai‘i Island in the 1900s. Nēnē were reintroduced to Maui in the late 1960’s within Haleakalā National Park. Today there may be about 500 nēnē reclaiming old habitats of wetlands and grassy areas at all elevations on Maui.