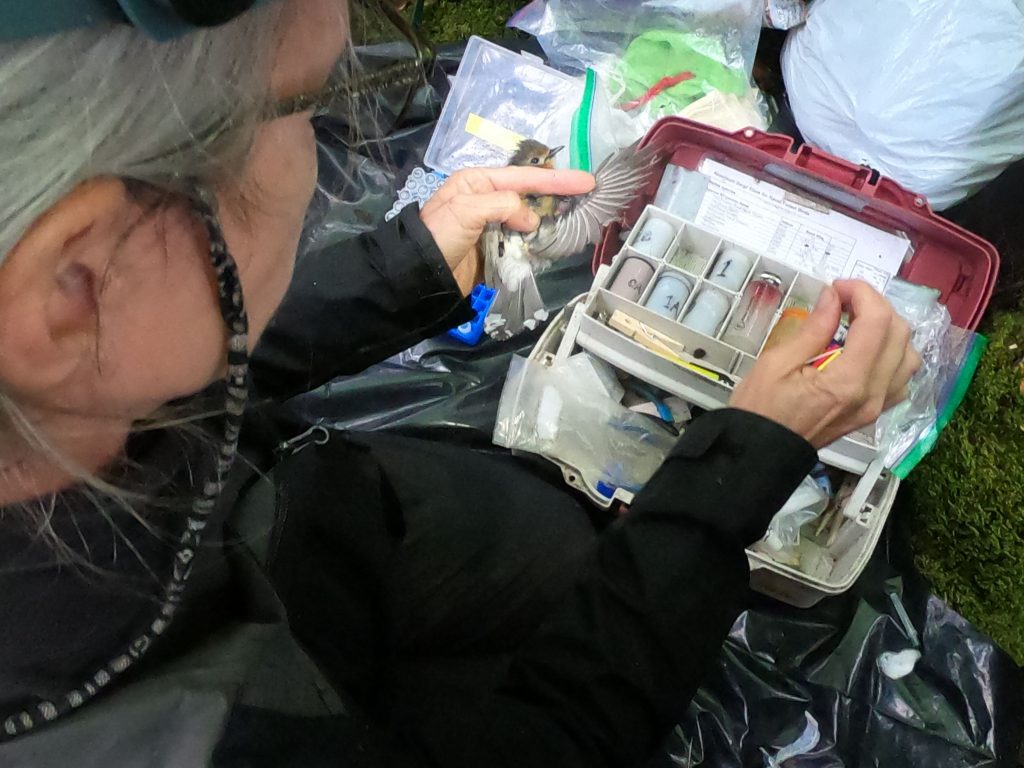 (Alaka‘i Wilderness Preserve, Kaua‘i) – A team of six people are now in their third day of trying to locate a single family of the Hawaiian honeycreeper, the ‘akikiki.

The number of birds in the Halehaha area of the native forest on the Alaka‘i Plateau plummeted and now the team of forest bird experts and scientists are trying to locate the ‘akikiki family nicknamed, Carrot, Napua, Abby, and Erica. They are a breeding pair and their chicks, believed to be the last remaining akikiki in this section of wet, high-elevation forest.

If found, they’ll be flown by helicopter to the Maui Bird Conservation Center operated by the San Diego Zoo Wildlife Alliance.

Dr. Cali Crampton, the leader of the Kaua‘i Forest Bird Recovery Project (KFBPR) is leading the search and rescue mission. “In 2018, we had territories and nests everywhere. This year we were able to only find one nesting pair and we believe there are only four, maybe five, ‘akikiki left in this entire area. When I first started with the project there were more than 100,” Crampton said.

Avian malaria is killing the highly susceptible honeycreepers one by one. During an exercise earlier this year, four experts in the field were tasked with analyzing all the available data. They were asked to come up with current ‘akikiki population estimates and a time to extinction for the diminutive birds. They reported the population of ‘akikiki, only found on Kaua‘i, as less than 100 and probably fewer than 50. Most disturbing was their finding that absent landscape scale control of disease carrying mosquitoes, ‘akikiki could be extinct in little more than two years. “I think these are desperate times. Ten years ago, there were more than 70 breeding pairs,” Crampton noted.

Birds that can be caught in fine-mesh mist nets over the next nine days will be first taken to a field banding station, to be weighed, undergo preliminary health checks, and to have their tiny leg bands checked, which identify them. Then they’ll be carried down the mountain to a remote field research camp where a tent has been set up to house them and to keep them safe, calm, and fed until they can be flown to the Maui Bird Conservation Center. There they’ll join some 40 other akikiki, hatched from eggs collected in the forest.

Crampton said, “I hoped we wouldn’t be here. I also know we were hoping against hope when we started the conservation breeding flock with the egg collections. We wanted to have mosquito control in place before they invaded here. Unfortunately, we are out of time for this particular species and this particular field site.”

Meanwhile, many organizations and experts are working on plans to introduce sterile mosquitoes into the Kaua‘i forests and other places in Hawai‘i where avian malaria is devastating populations of numerous native forest birds, bringing them closer to extinction.

Peter Luscomb of the non-profit Pacific Bird Conservation (PBC) has decades of experience with bird translocations around the world. He’ll be responsible for feeding and caring for the ‘akikiki the rest of the team hopes to capture. “I think it’s critical. The population is crashing and if these birds are left out in the forest, all indications are, they will die,” he said.

Luscomb will treat the birds for avian malaria. He added, “There’s nothing wrong with the ecosystem. The only problem is it’s got mosquitoes and malaria and once that’s resolved they can be brought back. The team is only gathering birds from this one area and as Luscomb said they plan to bring them back once it’s safe.

No one has a closer personal relationship to the remaining Halehaha ‘akikiki than Justin Hite, the KFBRP Field Supervisor. For nearly a decade he’s spent hundreds of days here, leading teams into the mountain and across valleys to search for birds. In the first two days of the current operation, they managed to catch two ‘elepaio in their mist nets and as for all eight species of native forest birds on Kaua‘i all species go through the banding station, where their checks have created a treasure trove of data.

“In 2017 everything looked amazing,” Hite commented. “In 2018, fantastic. There were lots of birds and many of them doing very well with 85% of adult ‘akikiki surviving from one year to the next. By 2019 less than half of the adults had survived. That was our first warning.”

For the first few days of the capture and translocation the weather on the Alaka‘i Plateau has been typical for late Fall. Heavy rain and strong winds have made it difficult to catch birds in the series of mist nets strung out across the forest ridge.

Hite and other team members blame climate change for the near demise of the ‘akikiki. “This is the last, best place for native birds on Kaua‘i. Many organizations and individuals have worked hard for many years to create a perfect area…a last refuge for birds in an almost entirely intact native forest. These birds remain in the very top, thin layer of the island. As the climate is warming, it’s made this last, little, teeny piece of Kaua‘i as good mosquito habitat. Unfortunately, this area is no longer safe for these birds,” Hite lamented. He added that what’s happening to the ‘akikiki is coming for the other Hawaiian birds. “The forest is so silent now and it’s about to become more silent.”

Crampton concluded, “With everything being said, we do have hope for this species in the rest of it’s range. We’re optimistic, if not confident, landscape-scale mosquito control will benefit other species, in addition to the ‘akikiki. There are numbers of others out there suffering from mosquito-born diseases, but whose populations are sufficiently numerous that they do have two or three more years.”

It’s a race against time, but with luck the ‘akikiki search and rescue team will have good news over the next week and a half, that Carrott, Napua, Abby, and Erica are safely on Maui to provide a bit of additional insurance for the survival of their species.

In addition to the DLNR Division of Forestry and Wildlife, KFBRP, San Diego Zoo Wildlife Alliance/Maui Bird Conservation Center and PBC, other participants in the translocation are the UH Pacific Cooperative Studies Unit, and the U.S. Fish and Wildlife Service.