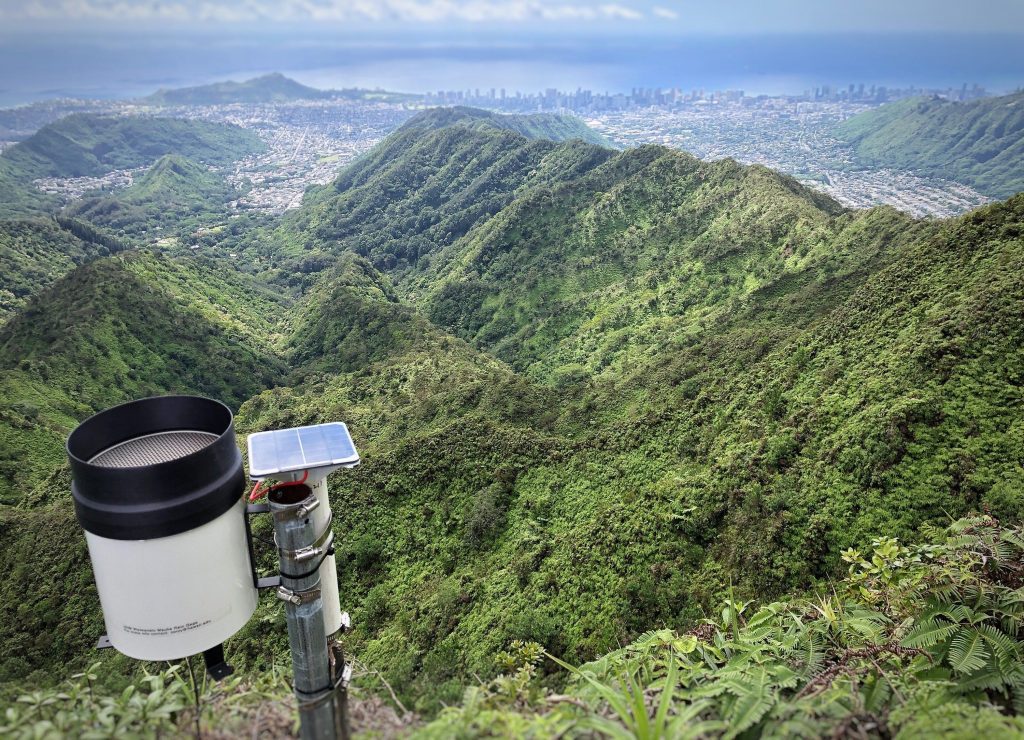 (HONOLULU) – The weather this week highlights how flooding is one of the major threats to the Ala Wai watershed and the coastal community of Waikīkī.

Invasive plants, an indicator of poor watershed health and flooding risk, are slowly overtaking the upland native forest on O‘ahu. An award from the National Fish and Wildlife Foundation (NFWF) will help protect these forests from some of the most threatening, invasive plant species. The NFWF funding will support the control of albizia, mules foot fern, and accelerate the complete eradication of miconia on O‘ahu.

Before people arrived, almost all the Hawaiian Islands were covered in native forest and shrublands. Oʻahu has now lost over 80% of its original native forest. These forests provide irreplaceable flood protection with their multi-layer canopies of ferns, mosses, shrubs, and trees. Native vegetation absorbs rain and cloud moisture and moves it quickly into the ground like a “giant living sponge.”

Increased flooding and erosion often occur when native forests are converted to single species stands of invasive plants that shade out all the vegetation on the ground.

In 2004, a debris jam at the Woodlawn Bridge in Mānoa forced the stream out of its channel and resulted in $85 million in damage across the Ala Wai community and at the University of Hawai‘i at Mānoa.

The $1.6 million grant from NFWF will result in a reduction in flood and landslide risk, cleaner water for coastal ecosystems, fewer brown water days, less stress on corals, less debris in waterways, improved water recharge, and protected habitat for rare plants and animals.

“Hawai‘i faces significant challenges due to climate change, including increased flooding and storm risk,” said Jeff Trandahl, Executive Director and CEO of NFWF. “The funding awarded by NFWF through the National Coastal Resilience Fund will help the State implement nature-based solutions to improve the health of the Ala Wai Watershed and reduce flood risk for local communities on Oʻahu.”

“Since 2019, we’ve been working with the Army Corps of Engineers (ACE) to develop a flood mitigation system for the Ala Wai Watershed. The community opposed ACE’s hardened solution and worked on more sustainable ecosystem restoration options. This is wonderful news that NFWF is funding this project which controls invasive species in the forest that will mitigate flood hazards while also improving the health of our watershed,” said Senator Sharon Moriwaki, who represents the Ala Wai and Waikīkī communities.

Funding from the State, as well as the Honolulu Board of Water Supply (HBWS) is serving as a match for this project. “We invest in the protection of forests on O‘ahu because we understand that the well-being of the entire island is tied to the well-being of mountain watersheds” said Ernest Lau, HBWS Manager and Chief Engineer.

“This is an exciting first step, but it’s important to keep in mind that long-term funding is critical to support these types of watershed protection projects into the future. Invasive species don’t stop spreading after the funding ends in three years” said District 23 Representative Dale Kobayashi, which includes Mānoa, Punahou, University and Moiliili.

The project is part of a larger vision for resiliency in the Ala Wai watershed. The City and County of Honolulu’s Office of Climate Change, Sustainability and Resiliency is tasked with implementing the C&C “Ola: Oʻahu Resilience Strategy,” including natural hazards mitigation, climate readiness, and mitigating economic and property risk within the Ala Wai Canal Watershed.

“We can’t forget that the health of the system starts in the conservation lands and mountain forests. When we restore and protect our mauka lands, positive benefits flow through communities and makai,” said Matthew Gonser, Executive Director of the office and Chief Resilience Officer for the C&C.

For the past 5 years, the Ala Wai Watershed Collaboration (AWWC), a major initiative of Hawaiʻi Green Growth (HGG), has been working with its network of over 60 stakeholders to reduce flood risks from natural disasters and potential climate change impacts throughout the watershed.

“The plan to protect native forests and remove invasive plants has extensive buy-in and is aligned with the community’s vision to approach flood mitigation and resiliency through green infrastructure investments,” said Celeste Connors, Executive Director of Hawaiʻi Green Growth.

Modeling for flood mitigation will be used to examine runoff and sediment delivery results with and without invasive species control and allow effects to be forecasted past the short timeframe of this project.

This data will help demonstrate the importance of controlling highly invasive plants before they become established in the watershed. “Investing in the health of green infrastructure, our forests, is much more cost effective than other strategies to reduce runoff,” said DLNR Chair Suzanne Case.

The Ala Wai grant is one of 49 proposals selected for funding from NFWF’s National Coastal Resilience Fund. This year, $39.5 million was awarded to support coastal resilience projects in 28 states and U.S. territories.
# # #