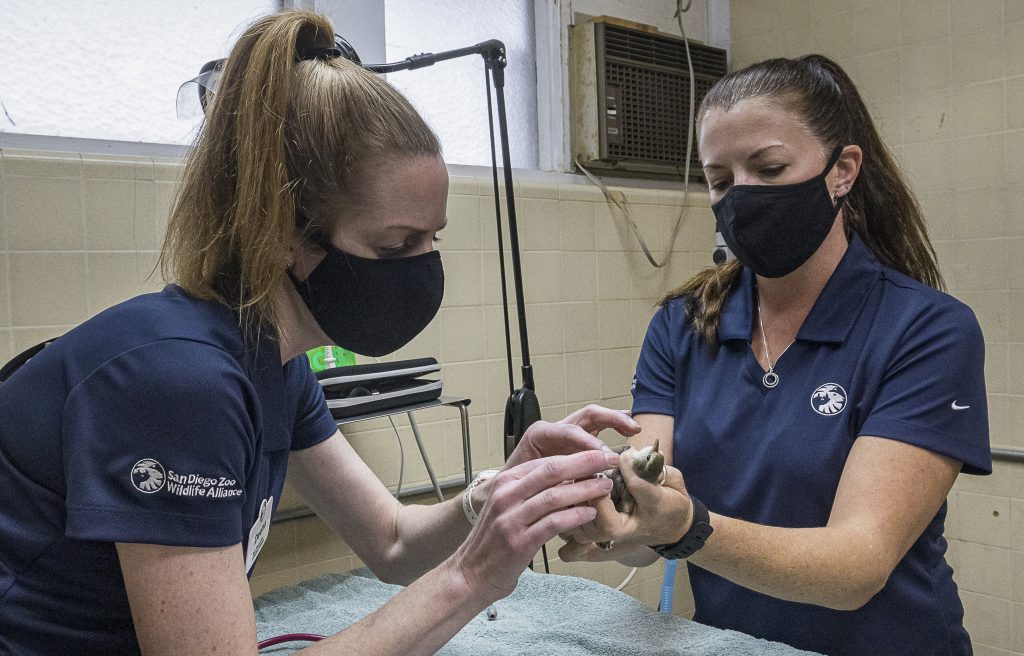 (KAHULUI, MAUI) – An ambitious effort to rescue four tiny birds deep in a thick Hawaiian rainforest saw its first taste of success last weekend, giving hope to a critically endangered species driven to the brink of extinction by malaria: an unfortunate consequence of climate change.

A 6-month-old ’akikiki chick was safely rescued on Kaua‘i and flown by helicopter to Maui. The chick and its family are believed to be among the last living ‘akikiki in what was once a bastion for the critically endangered species.

The move is a big step in a last-ditch attempt to save the little honeycreepers, who live at the highest elevations of the forests, where they’ve typically been safe from mosquitos that carry avian malaria and other deadly diseases. But as temperatures rise, the mosquitos have moved higher, too—and the tiny birds now have no way to escape them.

As a result, avian malaria has all but decimated what, until a decade ago, was a healthy and growing breeding population of ‘akikiki in the area.

A team of six biologists has been camped in the forest for the last 10 days, looking for the bird, its sibling, and their parents, to place them into the care of the the Maui Bird Conservation Center (MBCC), managed by San Diego Zoo Wildlife Alliance.

While the newly rescued birds are at the Alliance’s facility, biologists will try to reclaim their native forest home, perhaps using a bacterium to act as mosquito birth control.

The Hawaiian honeycreeper, just a few inches long, and weighing less than an AAA battery, is found only in the wet, mountainous forest of the Alaka‘i Wilderness Preserve on Kaua‘i.

The small team of experts from the Kaua‘i Forest Bird Recovery Project (KFBRP), the Alliance, Pacific Bird Conservation and the DLNR Division of Forestry and Wildlife (DOFAW) camped at the remote Halehaha research field camp, attempting to rescue the chick and its family. The team battled heavy rain and strong winds all week in their attempts to rescue the birds in mist nets strung across a high ridge, where the family had last been spotted. Last Saturday, they caught the chick in one of those nets, carried the bird down to camp, and fed and cared for it.

On Sunday (Dec. 5, 2021), a helicopter was dispatched from Maui to Kaua‘i to pick up the bird. After a two-hour flight, it arrived at the Kahului Airport around 1:30 p.m. On the landing pad, SDZWA veterinarian Dr. Deena Brenner peered into the bird’s transport box to give it a quick check, and quietly exclaimed that it appeared to be healthy and well.

A short golf cart ride and a 15-mile car ride later, the now well-traveled chick arrived in upcountry Olinda, at the Maui Bird Conservation Center, to eventually join 42 additional ‘akikiki. Most of these birds were hatched from wild-collected eggs and, ideally, they will be joined by the remaining three members of the chick’s family that may be rescued in the future.

While the chick is nicknamed Erica, its sex won’t be known until it matures in another six weeks.

Dr. Cali Crampton, who leads the KFBRP team, explained that this translocation project, approved at both federal and state levels, is an emergency effort to try and keep this particular population of ‘akikiki from going extinct. A second population of the species lives a few miles away, but the total wild population in the high-elevation forest of Kaua‘i is possibly fewer than 50.

“Landscape-scale control of the mosquitoes that carry the disease killing these birds is still several years away,” Crampton said. “We estimate the ‘akikiki population only has two years left before malaria kills them all.”

An earnest, collaborative effort is underway to eventually release sterile mosquitoes into the forest to reduce total mosquito numbers, but it could be too little, too late to save the ‘akikiki and other native forest birds on Kaua‘i. This is the motivation for trying to move the Halehaha population into safety, hoping the birds can be returned to their native habitat in the future. In addition to the family of four, it is believed there might be one more ‘akikiki still alive at Halehaha.

At the Maui Bird Conservation Center, Dr. Brenner gave the new arrival a thorough medical examination. “The bird looks to be in really terrific condition,” Dr. Brenner said. “It has excellent pectoral musculature. It has very good body weight, and is a fit, healthy bird.

“We did notice that the bird’s eyes were slightly dull, and its skin was dry, indicating mild dehydration, even though the bird had been eating throughout the day,” Dr. Brenner added. “We gave it subcutaneous fluids to improve hydration and help it feel a bit better. It was a big day for this little bird.”

For 30 days, the ‘akikiki chick will be isolated in a quarantine facility and will be getting anti-malarial medication in its food. “We think it’s possible this bird has been exposed to malaria out in the forest,” Dr. Brenner said. “In times of stress and change, birds may be more susceptible to getting sick, so it’s important to start her on treatment.”

The bird rescue team at Halehaha has just today to try and get a glimpse of the rest of the bird’s family and catch them in their nets, before flying out on Friday, hoping to return later if they’re unsuccessful.

Dr. Brenner reflected, “This is very meaningful for me to contribute to this avian conservation effort, where I can directly apply my skills and experience working with birds in a zoo setting to positively impact the health of these critically endangered, very special birds. I’m extremely happy to help and care for this bird, and hopefully protect it to preserve the species.”