Anyone Caught Could be Cited or Arrested 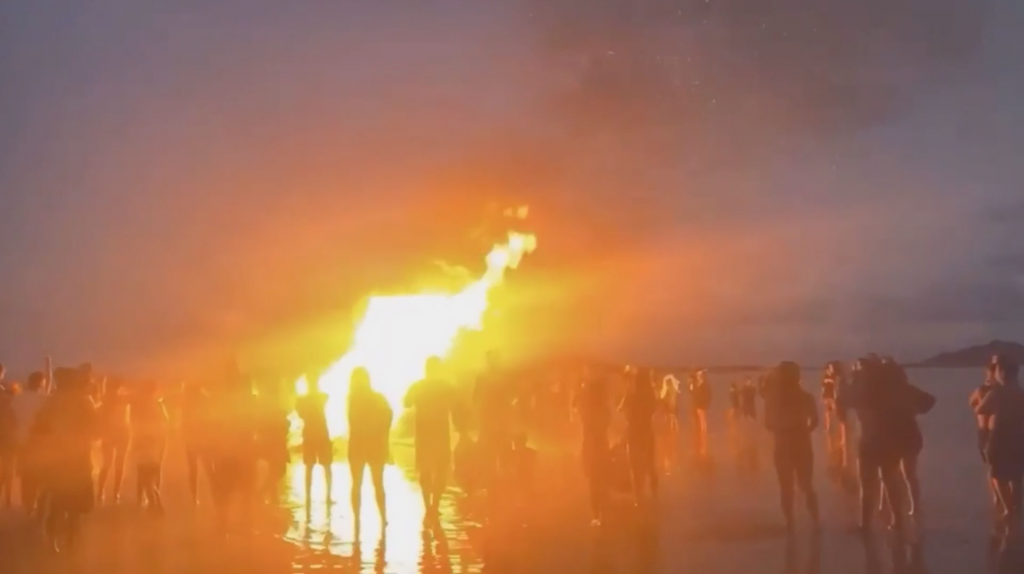 (HONOLULU) – The DLNR is taking a pro-active approach toward the illegal burning of Christmas trees at Ahu O Laka (Kāne’ohe Bay sandbar). This activity is a violation of State Administrative Rules (HAR). In recent years, photographs on social media sites have shown large numbers of people congregating as tree-fueled fires burn in the background. These tree-burnings are also destructive to both ocean and terrestrial natural resources.

DLNR Division of Conservation and Resources Enforcement (DOCARE) Chief Jason Redulla said, “We receive tips about tree burnings every year and dispatch DOCARE officers to He‘eia Kea Small Boat Harbor, the point-of-departure for boats heading to the sandbar. Unfortunately, we can’t always identify the individuals involved in these illegal and disrespectful activities.”

The burning of trees after the holidays has been going on for years and the activity is banned by the State Penal Code for Criminal Littering, HRS 708-829; and by Hawaii Administrative Rules (HAR) Section 11-60.1 Subchapter 3. Open burning is prohibited with a few exceptions such as cooking, fire training, and agricultural burning with a valid permit. Other types of open burning require approval from the Dept. of Health. Since January 2012, “backyard” burning of garbage and yard waste has been prohibited on all islands.

Redulla added, “People haul their trees to Ahu O Laka by boat and burning them is detrimental to the sandbar and the surrounding marine ecosystem. In January of this year numerous photos on social media showed these people clearly ignoring COVID-19 mandates, in effect on O‘ahu at that time.”

“Ahu o Laka is a sacred place,” said Leialoha “Rocky” Kaluhiwa, president of the Ko`olaupoko Hawaiian Civic Club. “The iwi (remains) of Chief Laka of Maui were brought by his sons and buried there centuries ago. Once iwi is buried in an area, it is consecrated and considered ‘kapu’, or sacred to Native Hawaiians. We strongly discourage anyone from taking their `opala (discarded items like Christmas trees) to light bonfires on Ahu o Laka.”  Kaluhiwa said Chief Laka is an ancestor to Hawaiian families who currently reside in the Kane`ohe bay area.

DOCARE relies greatly on the expeditious reporting of natural and cultural resources violations, by people who witness them. There are two ways to report incidents: 643-DLNR (3567) or via the free DLNRTip app available for both iPhone and Android users.

“Clearly, our officers cannot be everywhere, all the time, and the faster we receive reports about illegal activities, the better chance we have of responding in time to educate violators, and when necessary to cite them. All we ask is for everyone to respect the ‘aina,” Redulla said.