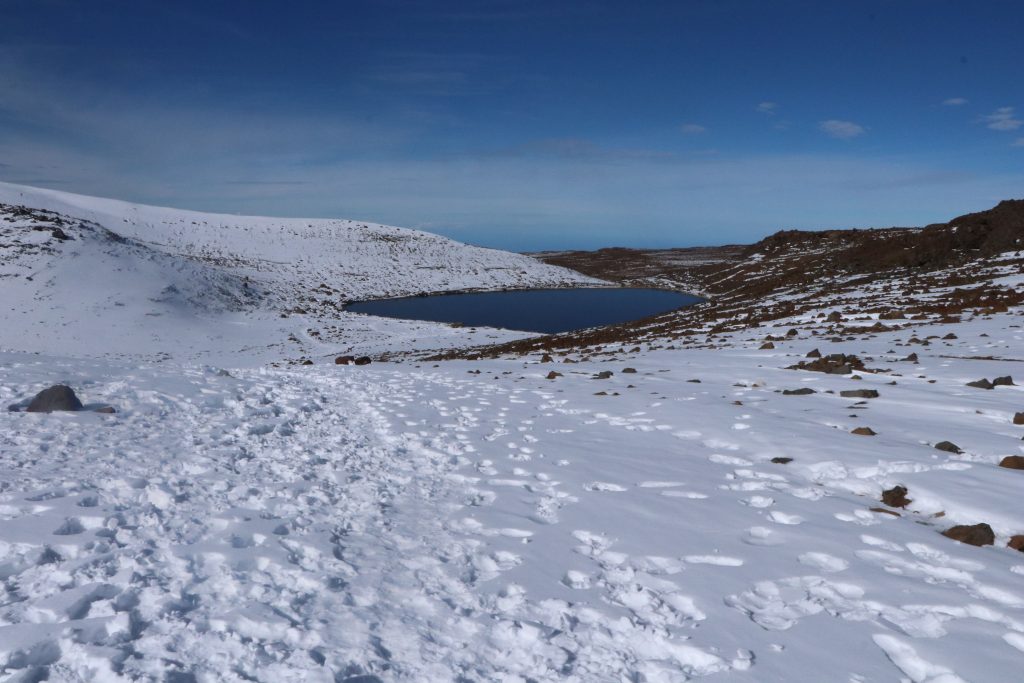 (Mauna Kea Ice Age Natural Area Reserve) – While it appears she has removed her social media postings, one woman got the attention of conservation managers and law enforcement, after posting photos of large rocks being thrown into Lake Waiau.

It currently is surrounded by a mantle of snow. The rock-throwing photos were posted earlier this month. Located at the 13,000-foot-level of Mauna Kea, Lake Waiau is culturally significant and in Hawaiian mythology, three deities (goddesses) inhabited the area.

Jordan “Kama” Lee-Loy, a specialist with the DLNR Division of Forestry and Wildlife Natural Area Reserve system said, “She came up here and decided it was a good idea to throw rocks into the lake. There are several obvious reasons this is upsetting, both to the ecological community that lives here and to the Native Hawaiian community. It can be seen as pretty disrespectful tossing large rocks into a place that Hawaiian culture reveres and holds in such high regard.”

Lee-Loy says while the woman may not have meant to be disrespectful, he would like her to understand the level of obvious disrespect for the people who visit Lake Waiau culturally, ancestrally, and have ties to the place. “Though she may not have meant any ill will, whenever you visit anyplace and are unfamiliar with the cultural practices, the best idea is to understand the connection to the people and how you can respectfully visit a place without causing a disturbance or disrespectful action,” he added.

Signs near the trailhead to the lake clearly identify Waiau as a Hawaiian sacred site. Swimming, use of watercraft, and rock piling are prohibited. One sign explains, “the Natural Area Reserve System was established to protect representative examples of natural history, land, and water areas which support unique Hawaiian ecosystems.” It asks for all visitors to help maintain the reserves in their natural state. DLNR has attempted to contact the woman involved but hasn’t received a response.

Offerings left at the side of Lake Waiau also got Lee-Loy’s attention. “We don’t want to limit traditional and customary practices, but I’m pretty sure an orange left as an offering is not culturally significant. We ask for everyone to be mindful not to inadvertently introduce invasive species like ants or non-native plants by leaving them as offerings.

Lake Waiau is one of the highest elevation lakes in the U.S. Its size fluctuates considerably as water levels change, largely dependent on precipitation amounts from snow and rain.