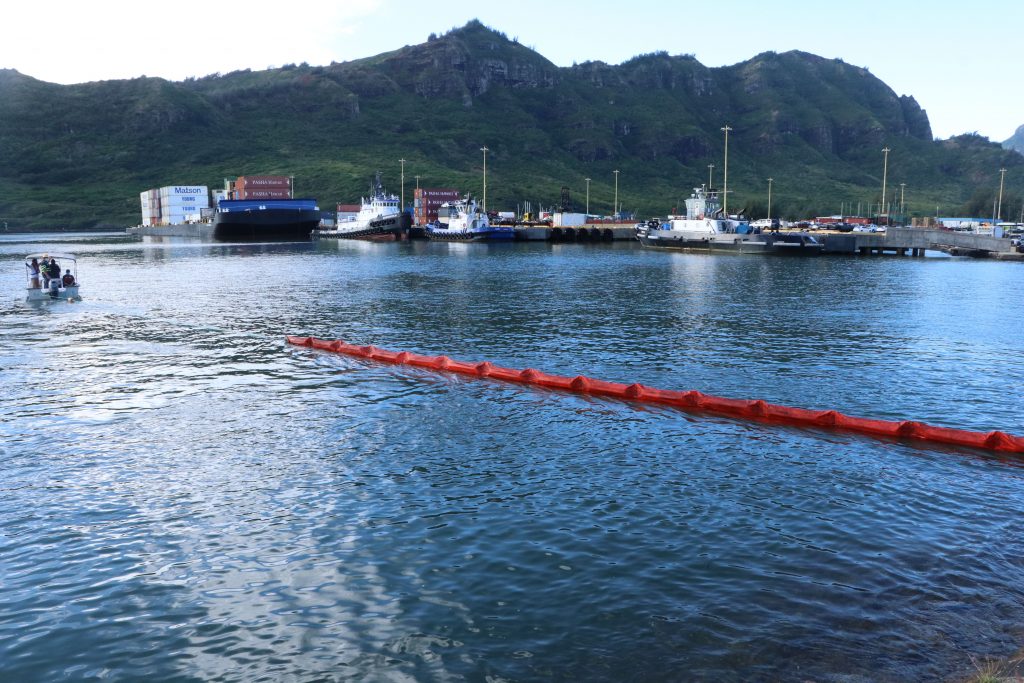 (LĪHUʻE) – On Tuesday, the U.S. Coast Guard (USCG, a private contractor, the Dept. of Transportation (DOT), and the Dept. of Land and Natural Resources (DLNR) tested and validated the USCG Geographic Response Strategy (GRS). GRS is a response plan for spills in marine environments at Hawai‘i deep-water commercial and small boat harbors. Currently there are 15 GRS plans around the state.

David Jones, the USCG Incident Management Division Chief for Sector Honolulu, explained, “We conduct full scale deployments of booms, stored at each of the harbors, at three or four each year on a rotational basis. Booms create a floating barrier that can keep pollutants, like oil, from spreading after a spill. It’s one of the most effective ways to keep oil in place and out of other areas.”

At Nawiliwili Harbor a small boat hooked onto 1000-feet of boom and slowly spooled it out in the shadow of a cruise ship that docked several hours earlier. Rob Cecconi, the DOT Harbors Division Assistant District Manager said testing response time and capacity is important in order to contain a spill as quickly as possible. “During my ten years here, we’ve never had to put the boom out due to a serious spill. It’s great for all the partners to do these tests because the 40-foot-deep basin at Nawiliwili is home to a wide variety of marine life, including turtles.”

Deeper into the harbor is the Nawiliwili Small Boat Harbor, which is the major recreational boating facility on Kaua‘i operated by the DLNR Division of Boating and Ocean Recreation (DOBOR). Jeremiah Aguilera, DOBOR’s Acting Kaua‘i District Manager was pleased to see yesterday’s GRS validation not only include the full-scale boom, but an exclusionary boom test to protect the small boat harbor, and the mouth of the Huleia River.

“The Huleia River is a navigable waterway and we’re entrusted with preserving it’s natural state and its beauty. Spilled oil or other substances could have significant negative impacts on both the marine and estuary environments of the river system. Upstream a short distance is the Menehune Fishpond. The GRS helps identify how we can best and effectively protect the Huleia River and boating resources at Nawiliwili,” Aguilera added.

While environmental protection is the primary driver for GRS validation testing, the economic impact of a spill is not lost on the partner agencies. Nawiliwili Harbor is the only port for visiting cruise ships on Kaua‘i and is a very busy commercial port with most goods for the island arriving by container ships which offload at the harbor. The small boat harbor has 120 slips for small recreational vessels and 13 offshore mooring sites; all of which could be affected by a spill.

USCG Chief Jones concluded, “Our primary concern is always the environment and public safety. The actions we take in the first 24-to-48 hours are critical. If we can contain the spill at its source, it will obviously be better for the marine environment, while protecting the personal property of boaters using the small boat harbor and hopefully maintaining commercial activity without unnecessary interruption.”