02/11/22-WHO IS DUMPING LARGE BAGS OF TRASH THAT END UP IN THE ALA WAI SMALL BOAT HARBOR?

WHO IS DUMPING LARGE BAGS OF TRASH THAT END UP IN THE ALA WAI SMALL BOAT HARBOR? 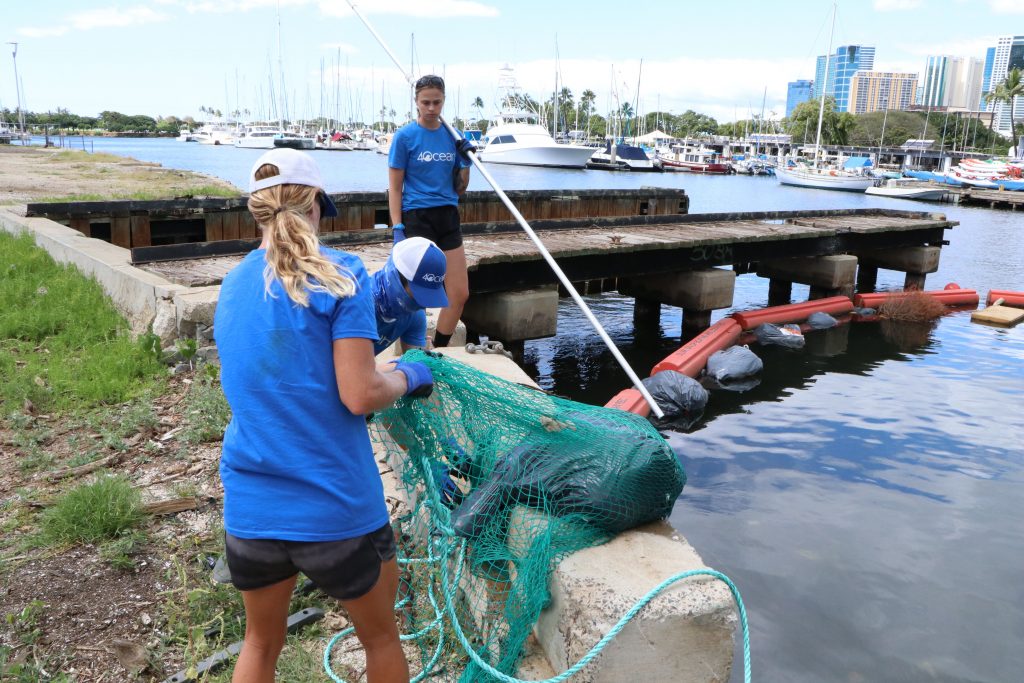 (HONOLULU) – It all started last October, when people began seeing bag after bag of rubbish floating in the Ala Wai Small Boat Harbor or within the trash catchment at the harbor’s mouth.

Kirsten Kelly and other staff from 4ocean, an international public benefit corporation, have permission from the DLNR Division of Boating and Ocean Recreation (DOBOR) to retrieve and dispose of the bags.

“They stink. And beyond the smell, it’s super hard to pull them up because they’re just full of water. So, before we figured out this par buckling method (nets and poles), we had been kind of having to rip them open and picking stuff up one piece at a time. And whew! The smell, it’s really not fun,” Kelly said.

Yesterday, she and two other 4ocean staff removed eight, smelly, waterlogged bags from the trap. Several broke apart as the team attempted to get nets around them to try and muscle them up to dry land. Numerous times they had to walk away for breaths of fresh air, due to the cloying stench. After the water drained, the bags weighed a total of 408 pounds.

Waikīkī Yacht Club paddler Jeanne Martin-Hopkins did a little sleuthing this week and walked up Maikiki Stream, where she spotted several of the big, black bags in the water. The stream is one of the tributaries that flows into the harbor. Yet, the source of the masses of stinky trash remains a mystery.

“They’re just disgusting and foul. They are full of bad stuff…feminine products, stuff that pokes you through the bags. The fact that somebody is deliberately throwing these bags in the Ala Wai instead of disposing of them properly, you know, it just needs to stop,” Martin-Hopkins commented. “That’s why we’ve been kind of working to try to get to the bottom of this. I’m sure that the Hawai’i Yacht Club (located on the opposite side of the harbor) has been dealing with it just the same as the Waikīkī Yacht Club.”

Martin-Hopkins says canoe clubs and yacht club staff picked up at least 100 bags that escaped the trap. The general manager of the Waikīkī Yacht Club confirmed its efforts stopped after one of two maintenance workers, who regularly retrieved bags, developed a staph infection, which likely was due to contact with the rubbish.

“When we’re out in a six-person canoe we’ll use a rope and try to lasso them, because you really don’t want to touch them. These would be the ones that missed the catchment. Sometimes they rip open and create a mess, so we’re just trying to get them into the trap,” according to Martin-Hopkins.

Other than knowing the bags originate somewhere upstream of the Ala Wai Small Boat Harbor, no one has any idea of the actual source of the unwanted rubbish. Based on the contents of bags that have ripped open, Kelly said it could be residential or commercial trash, or a combination of both.

Anyone caught throwing trash into any Hawai‘i waterway could face criminal littering charges. The people doing the work to clean it up, just want it to stop, calling the whole situation, tremendously disgusting.

If you have information or see anyone dumping trash into streams, lakes, or the ocean anywhere in Hawai‘i, call the DLNR Division of Conservation and Resources Enforcement (DOCARE) hotline at 643-DLNR (3-5-6-7), report it via the free DLNRTip app, or call 9-1-1.