x
Hawaii.gov
Text size:
Stay Connected
Home » Aquatic Resources, Fishing, Main, Media, News Releases, slider » 04/05/22-LIMU LOVING HUMANS AREN’T THE ONLY ONES GETTING IN ON “THE YEAR OF THE LIMU” 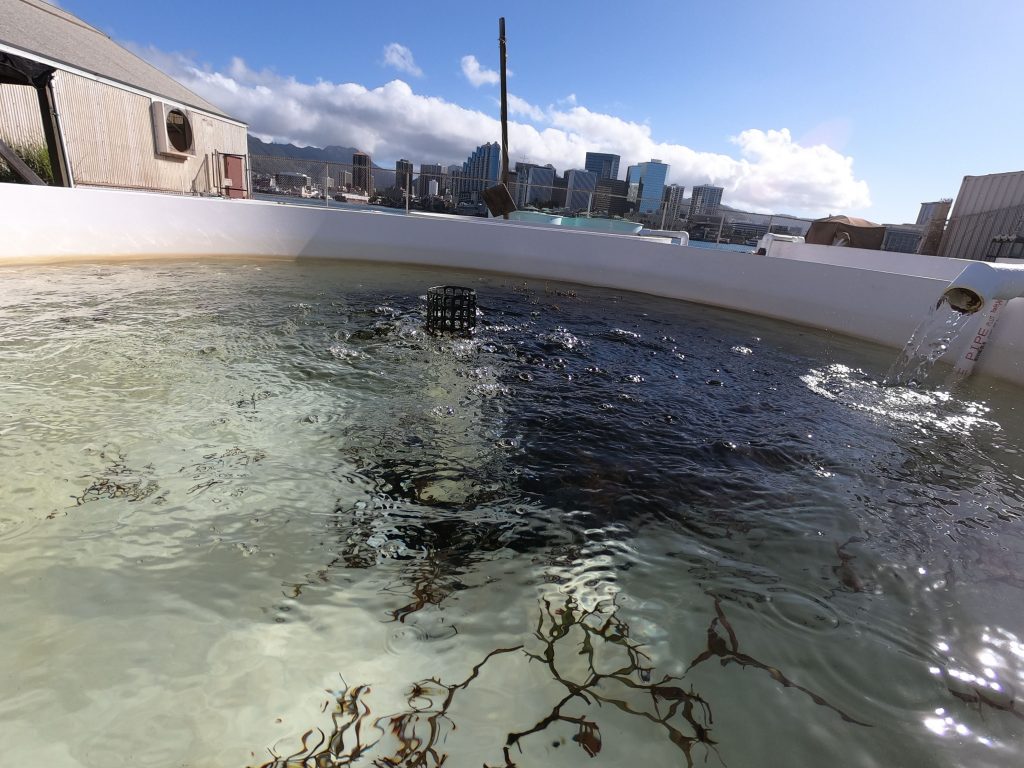 (HONOLULU) – As limu lovers across Hawai‘i celebrate 2022 as “The Year of the Limu,” as proclaimed by Gov. David Ige, little urchins growing in tanks at the DLNR Anuenue Fisheries Research Center on Sand Island, munch on hatchery-grown seaweed.

“It’s certainly ironic that we’re feeding urchins with a native limu species to get them large enough to go out into the field to eat invasive seaweed,” explained David Cohen, urchin hatchery manager with the DLNR Division of Aquatic Resources (DAR).

For more than a decade, urchins have been raised at the hatchery for eventual planting in Kāne’ohe Bay or offshore at Waikīkī. They’re collector urchins and their mission in life is to devour invasive seaweed that chokes coral colonies. Workers at the hatchery expect to reach a milestone of one million out-planted urchins by year’s end.

When urchins are between five and 15 millimeters in size…about the size of a pencil eraser…they’re large enough to start eating seaweed. During this two-to-three-month period , the native seaweed is their primary source of nutrition. They’re released when they’re about the size of a dime. “Limu has a variety of beneficial uses. For us, the primary purpose for the limu is to feed it to the urchins until they’re large enough to go out into the field,” Cohen added.

Limu is a primary food source for people in Hawai‘i, across the Pacific, and all over the world.

The hatchery team grows a beautiful seaweed, commonly called red sea lettuce or lepe-o-Hina in Hawaiian. It is a fast growing, native limu, but for some reason the urchins don’t really like to eat it. Cohen remarked, “It’s kind of a double-edged sword. It grows nicely and looks great. However, it’s not a great food for the urchins. We’re using it more for out-planting purposes and perhaps for people to consume.”

Daily, hatchery technicians keep a close eye on urchins in dozens of long tanks. At feeding time, they clean-up the limu with a fresh-water rinse, break it up, and place it in the urchin tanks.

“It’s a native limu and the urchins love it. Out in the wild they’ll eat anything, and work by a graduate student shows the collector urchins do prefer the invasive seaweeds. In our hatchery they grow-up as limu connoisseurs, feeding on the best native seaweed. Once they’re out in the ocean they become fast-food consumers,” Cohen joked.

Since the project began collector urchins are credited with vast improvements to the numerous patch coral colonies in Kāne’ohe Bay.