THE JOY OF A MONK SEAL BIRTH CAPTURED ON CAMERA 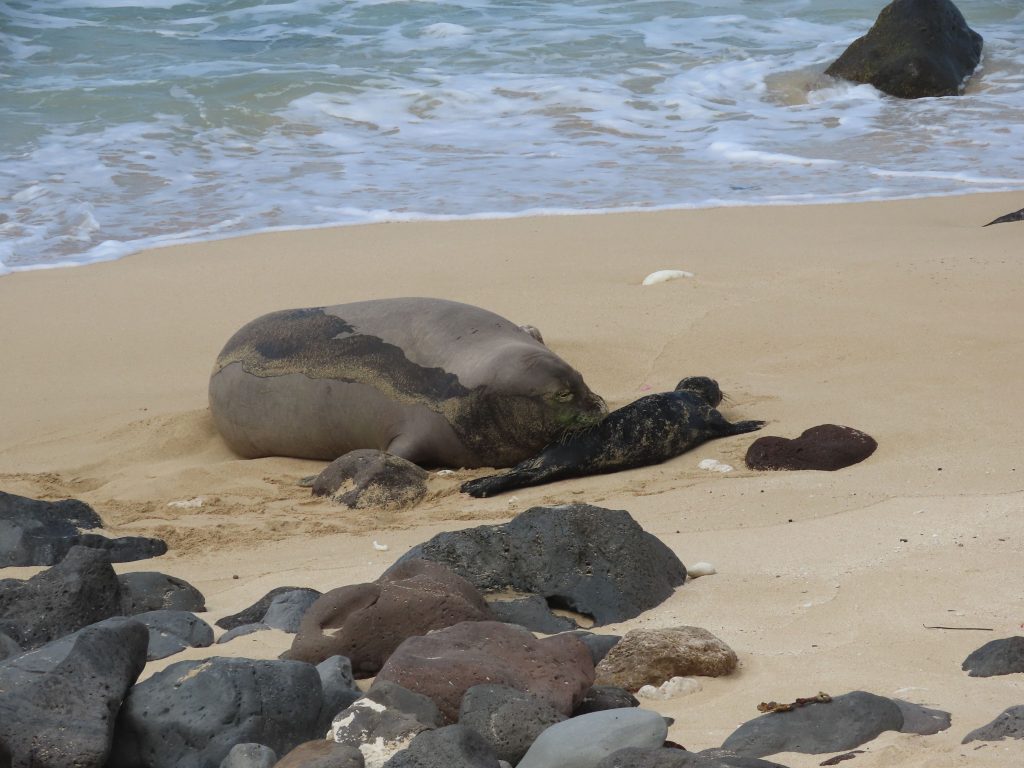 (HONOLULU) – Lesley Macpherson of the DLNR Division of State Parks has witnessed five monk seal births. On April 14, she documented her sixth, as she recorded veteran mother RN58 give birth to PO5, the fifth pup born on O‘ahu this year.

Macpherson said she observed the mom on Saturday, April 9, and it looked ready to give birth. She continued to watch RN58 every day, including last Thursday, when she saw it go out for a dawn swim and then haul out on a North Shore beach.

That afternoon she said the seal had started contractions and she, along with two volunteers, witnessed the breach birth of PO 5 at 2:30 p.m. “As soon as its sac burst, the little one starting wiggling around. Mom checked on it by vocalizing. He was able to move fast,” Macpherson recounted. Until the encounter with the rock.

Some of the most endearing of her video clips show the pup stuck on one side of a small beach rock. “It was 20-minutes old when it made it to the rock. Mom was on the other side vocalizing. The pup took three-long minutes to scale it,” Macpherson said.

By Friday, PO5 was nursing regularly and had its first water experience. “Mom moves down to the water line to cool off and her day-old offspring follows and does circles around her.” Macpherson said the first couple of times it was surprised by waves washing on shore.

On day five, of Macpherson’s vigil, she saw mom and pup in the morning. “PO5 had a long nursing session and was out cold.”

“It’s really important, especially during rearing and weaning, that people respect the boundaries set up to protect these seal pairs and to keep their dogs on leashes at all times,” said Ryan Jenkinson, Protected Species Program Lead for the DLNR Division of Aquatic Resources (DAR). The first-time mom, RH92, survived an off-leash dog attack, right after she had weaned.

DLNR, NOAA Fisheries, and Hawai‘i Marine Animal Response will continue to actively monitor the moms and their pups for the next five to six weeks.