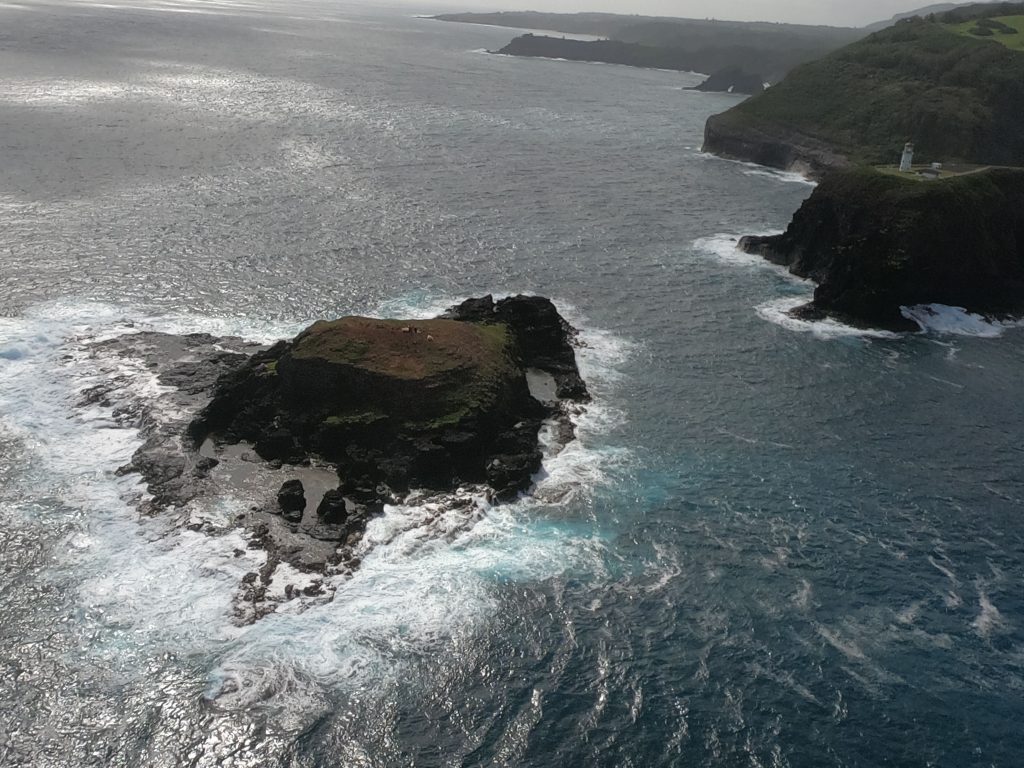 (Kīlauea, Kaua‘i) – Seabirds nesting on three-acre Moku‘ae‘ae Island, just off Kīlauea Point, have one of the best views of natural and manmade features in Hawai‘i. The iconic Kīlauea Point Lighthouse is in full-view atop the rugged cliffs, often inhabited by thousands of seabirds.

Last week workers from the DLNR Division of Forestry and Wildlife (DOFAW), the Kaua‘i Endangered Seabird Recovery Project (KESRP), and volunteers from Archipelago Research and Conservation (ARC), took the first steps to create a new colony of Band-rumped Storm Petrels on Moku‘ae‘ae. The species is listed as endangered both at the federal and state level. The work is intended to also enhance the colony of Bulwer’s Petrels, already breeding on the island.

On Friday, just up the road from the lighthouse, workers loaded nest boxes for the birds into large canvass bags. Earlier a helicopter had dropped three people on the island, and then made five additional trips to sling-load supplies over. The boxes are set out as burrows, with the hope they will become nesting homes for two species of seabirds.

“For these nest enhancing projects, we expect our actions will help increase breeding success for the species, increase their breeding ranges, and increase our own capacity to study these enigmatic species,” explained Dilek Sahin, KESRP project coordinator.

The team set up fifty nest boxes and calling systems to try and attract  the Band-rumped Storm Petrels. A new colony, created by this social attraction, will make research more accessible and management activities more effective. The boxes were built specifically to allow these small petrels in, while keeping the larger Wedge-tailed Shearwaters out. Researchers say this will help reduce “inter-specific” competition, helping to increase nesting success for the target seabirds

Sheri S. Mann, the DOFAW Kaua‘i Branch Manager was one of the driving forces behind the Lehua Island Restoration Project. The much larger Lehua, like Moku‘ae‘ae, is also managed as a State Wildlife Sanctuary and is now free of rats which had a long history of devouring seabird eggs and chicks.

“On Lehua we are now in the recovery and monitoring phase. Native seabirds have returned in larger numbers (compared to pre-rat eradication), and native plants are being allowed to grow without have rodents gnawing on them,” she noted. The grant supporting rare seabird and recovery on Moku‘ae‘ae is also covering additional work on Lehua, including placement of thirty nest boxes for Band-rumped Storm Petrels. On both islands, trail cameras will be used to monitor activity and to provide scientific data to maintain, protect, and facilitate seabird re-colonization of the islands.

Dr. André Raine, Science Director of ARC, did extensive work on Lehua, and was on hand on Moku‘ae‘ae to accept sling-loads of burrow boxes and sandbags to hold them in place. The chopper lowered one load to where Raine was standing on a small spit of sand surrounded by rugged rocks…the preferred breeding habitat for Bulwer’s petrels, described as a secretive bird. It is hoped that the nest boxes deployed in these areas will provide additional protected nesting sites for the existing Bulwer’s Petrel colony.

No rats have been detected on Moku‘ae‘ae, but barn owls have. Researchers find bird carcasses on every trip to the islet. An integral part of the project is controlling the invasive, non-native owls.

Sahin concluded, “With our sound system (social attraction), and safer burrows we want to create the impression that Band-rumped Storm Petrels are already nesting on Moku‘ae‘ae. We have created an attractive system for the birds and because these species have high apparent site-fidelity once they come to the island to nest, we’re hoping they’ll stick with their home site year-after-year.”