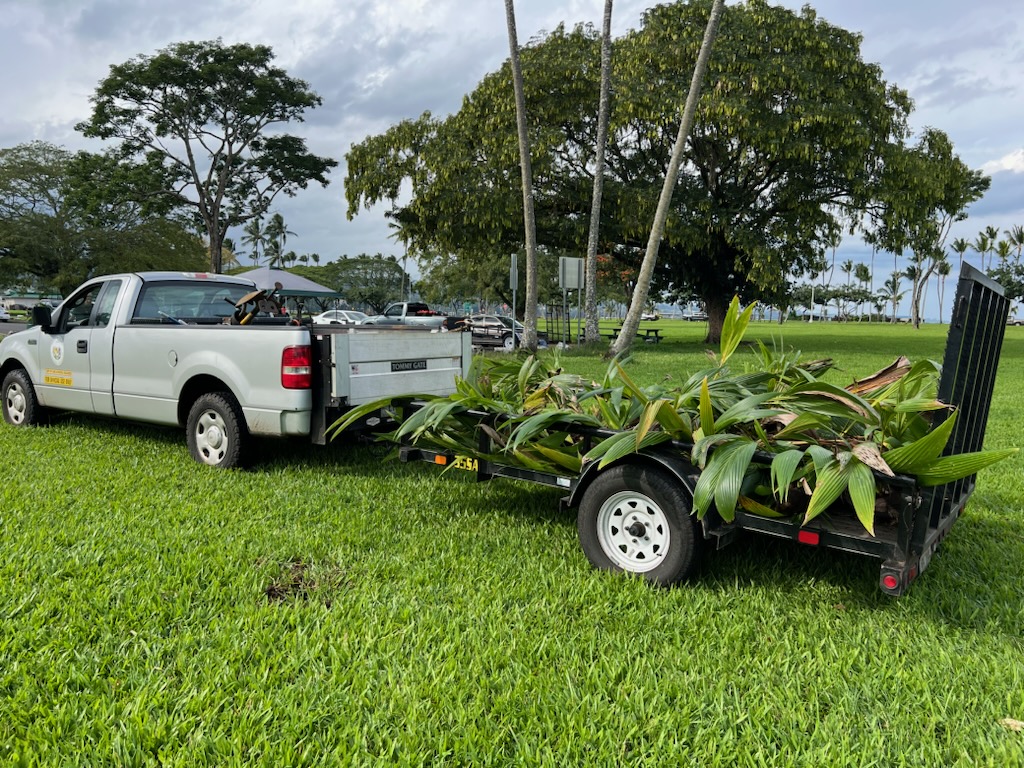 (HILO) – Four times, over the past nine years, Gene Tamashiro of Hilo has been cited or arrested for leading the planting of a so-called “Kanaka Garden” in the middle of the Wailoa River State Recreation Area.

On Sunday, Tamashiro was arrested by officers from the DLNR Division of Conservation and Resources Enforcement (DOCARE) and charged with two violations of Hawai‘i Administrative Rules (HAR). DOCARE alleges Tamashiro and his group of 15 others, began digging ground up in the state park over the weekend, culminating with the planting of an estimated 165 keiki coconut palms. These plantings were in violation of the following HAR, which carry a petty misdemeanor penalty:

DOCARE reports that the group were gathered at the Bishop Street entrance to Wailoa River State Recreation Area and appeared to be in the process of planting palm trees in the park grounds. At 1:20 p.m. on Sunday a DOCARE officer observed Tamashiro excavating the ground and then planting a juvenile coconut palm near the rear of the Kamehameha Statue. He was arrested about an hour later, processed by sheriffs with the Dept. of Public Safety and held at the Hawai‘i Police Dept. cell block until he posted $500.00 bail.

Tamashiro posted the planting and his arrest on the Facebook page, Aloha Nation Live.

In 2013, Tamashiro and several others were cited following an illegal planting operation in the park. In Jan. 2021, the 65-year-old man, was again cited for three violations of Hawai‘i Administrative Rules (HAR) for planting several hundred plants.  A crew from the DLNR Division of State Parks removed illegally planted taro and banana trees at that time.

Ten days later, on Jan. 17, 2021, he was arrested at Iolani Palace after scaling and jumping the fence, after being denied permission to gather with supporters to mark the anniversary of the overthrow of the Hawaiian Kingdom. The palace and its grounds were closed on Sundays at that time due to the COVID-19 pandemic.

To answer the latest charges, Tamashiro has a court appearance in Hilo District Court on Jan. 10, 2023.