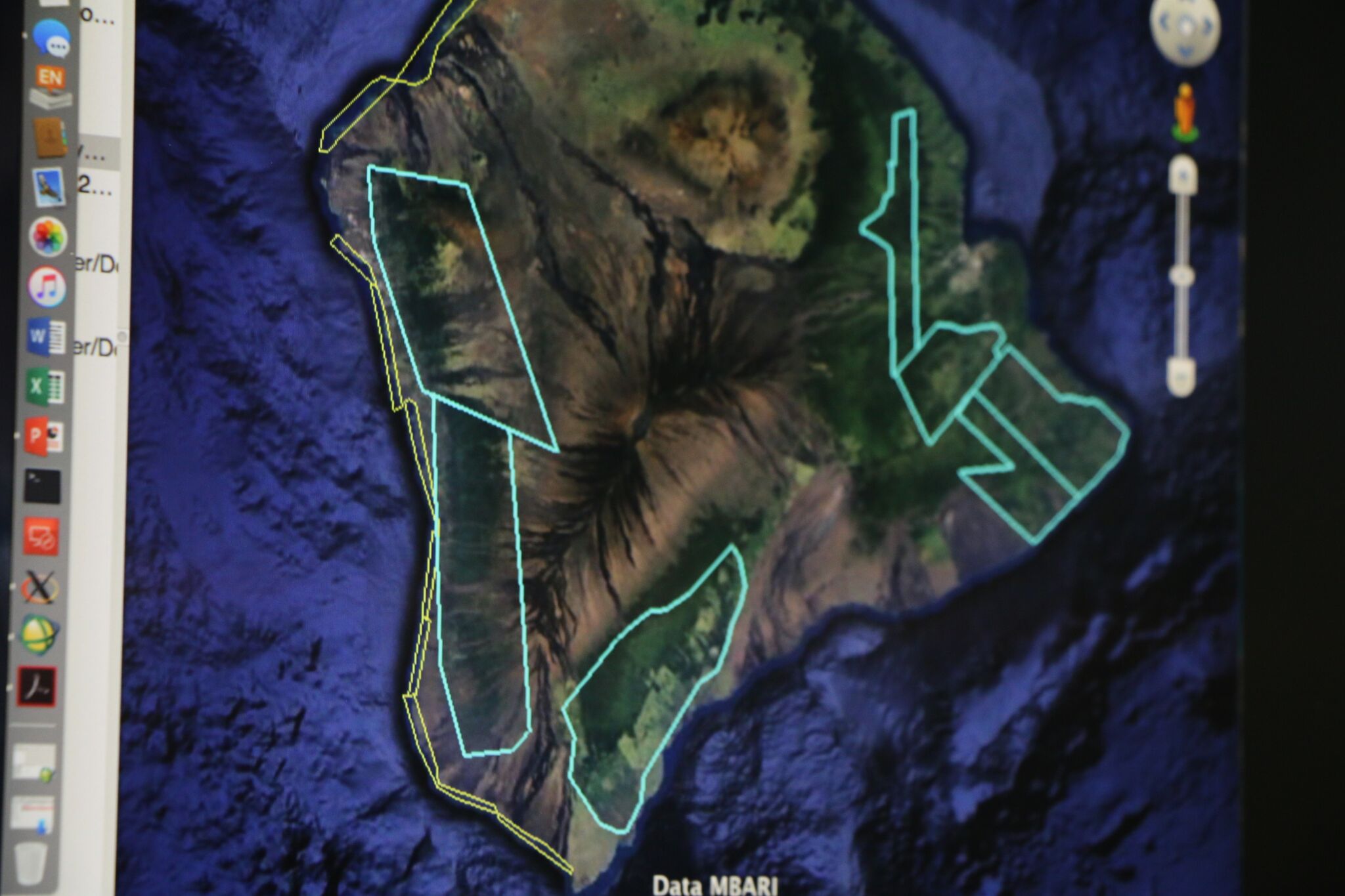 (HILO INTERNATIONAL AIRPORT) – With 75,000 acres of Hawai‘i island ʻōhiʻa forest now showing symptoms of the fungal disease known as Rapid ‘Ōhiʻa Death, federal and state agencies and non-profit partners are using an array of high technology to detect its spread.

“The battle against the two types of Ceratocystis fungus that causes Rapid ‘Ōhiʻa Death has always been a hugely collaborative effort,” said Rob Hauff, State Protection Forester for the DLNR Division of Forestry and Wildlife (DOFAW). “Now,” Hauff explained, “the collaboration between the agencies and organizations engaged in the fight against this devastating disease not only continues, but is expanding, particularly on the detection front.”  Early detection is considered critical in helping to identify Rapid ‘Ōhiʻa Death’s spread on the Big Island and to other islands and to provide data and scientific information to aide researchers working hard to find a way to stop it.

During a demonstration today, researchers showed off three of the high-tech survey/detection tools currently involved in mapping and on-site testing for the presence of Rapid ‘Ōhiʻa Death.

Dr. Carter Atkinson a Research Microbiologist with the U.S. Geological Survey based at Hawai‘i Volcanoes National Park, developed what the team from the Big Island Invasive Species Committee (BISC) fondly calls a “lab in a suitcase.”  Recently the BISC team collected ʻōhiʻa samples from towering trees in the Laupāhoehoe Forest Reserve on the Big Island’s east coast. Prior to the development, earlier this year, of Atkinson’s portable testing laboratory, all samples were sent to the USDA ARS Daniel K. Inouye U.S. Pacific Basin Agricultural Research Center in Hilo.  Since the cause of Rapid ‘Ōhiʻa Death was first discovered in 2014, Dr. Lisa Keith who runs the main testing lab, has been overwhelmed with samples.  Bill Buckley, the Forest Response Program Coordinator for BISC said, “The lab in a suitcase has been really nice.  We can collect our samples in the field, and nearby under a portable tent the testing equipment is set and ready to go.  Within a few hours we get preliminary results. In the remote location’s we often work in, this is really beneficial. If we get a positive result, we then can go immediately back out and do additional sampling to get a better sense of how widespread the infection is. This greatly speeds up management decisions.”  Positive samples are sent to Dr. Keith’s lab for further testing and verification.

On the same day BISC tested samples in the Laupāhoehoe Forest Reserve, another team of researchers prepares to launch an unmanned aerial system (UAS) off the side of Stainback Road, one of the epicenters of the infection. Dr. Ryan Perroy of the Department of Geography & Environmental Science at UH Hilo and his team are now spending about 25% of their time flying the UAS for Rapid ‘Ōhiʻa Death mapping and detection.

Perroy said the “drone” has been in use in the battle against Rapid ‘Ōhiʻa Death for about a year and a half.  “It’s very good for monitoring changes in the forest on an individual tree basis, because the resolution of the imagery is so fine that you can see individual leaves and branches,” Perroy explained. That allows researchers not only to see changes over areas already infected by the fungus, but to detect suspected new cases. As valuable as the UAS imagery is, Perroy said it’s very difficult to fly over ʻōhiʻa forests every month and see the rapidity of tree decline. “It’s not the best day when we come back and we see more and more trees down since the last time we flew. Our efforts are one piece of the larger effort to better understand the disease and better protect our forests,” Perroy concluded.

Above, at 8,000 feet, the Carnegie Airborne Observatory (CAO) is in the process of remapping roughly 650,000 acres of ʻōhiʻa forest on Hawai‘i island. This is the second time this twin-engine aircraft with millions of dollars of highly sophisticated equipment on board has peered into the very structural makeup and chemistry of individual trees to measure forest health.  The first time was in January 2016. This month’s flights will provide additional 3D imaging and data to fuse with ground data and the UAS data to give scientists and resource managers a really clear picture of the scope of spread of Rapid ‘Ōhiʻa Death.

Dr. Greg Asner leads the CAO effort. He explained, “Our 3D imaging system means we see the leaves in the forest canopy on individual trees.  We can determine tree heights, the tree’s structure and the chemical make-up.” Utilizing imaging spectrometers, mounted in the rear of the plane, along with laser-based technology, super high resolution GPS, and a high-end, military-grade intertial motion unit (IMU) Asner and his team are about two-thirds finished remapping the Big Island’s ʻōhiʻa forests, in this second round of flight missions.

He added, “Our work provides the whole island view and that interfaces with all the field work and with some of the high-resolution mapping that’s happening locally within some of the canopies.  We give the big picture, landscape scale view, but also with a lot of detail.”

All of the researchers and managers working to combat Rapid ‘Ōhiʻa Death agree that their collaborative efforts are about the only silver lining to what is a serious threat to Hawai‘i’s most important native tree. Ōhiʻa protect the state’s watersheds by providing a sponge-effect to allow rainwater to slowly seep into underground aquifers.  They also help prevent erosion and the spread of invasive species and they are very culturally significant and prized in lei making.

“I think it’s really encouraging in this daunting threat to our precious native ecosystem, to have a community of natural resource managers and scientists come together to find a solution,” said Philipp LaHaela Walter, State Survey and Resource Forester for DLNR/DOFAW. He added, “I think this experience of having dedicated partners, complete collaboration and the deployment of top-notch technology has greatly improved cross-agency communications and efficiency and we all hope eventually leads to a treatment for Rapid ‘Ōhiʻa Death.”