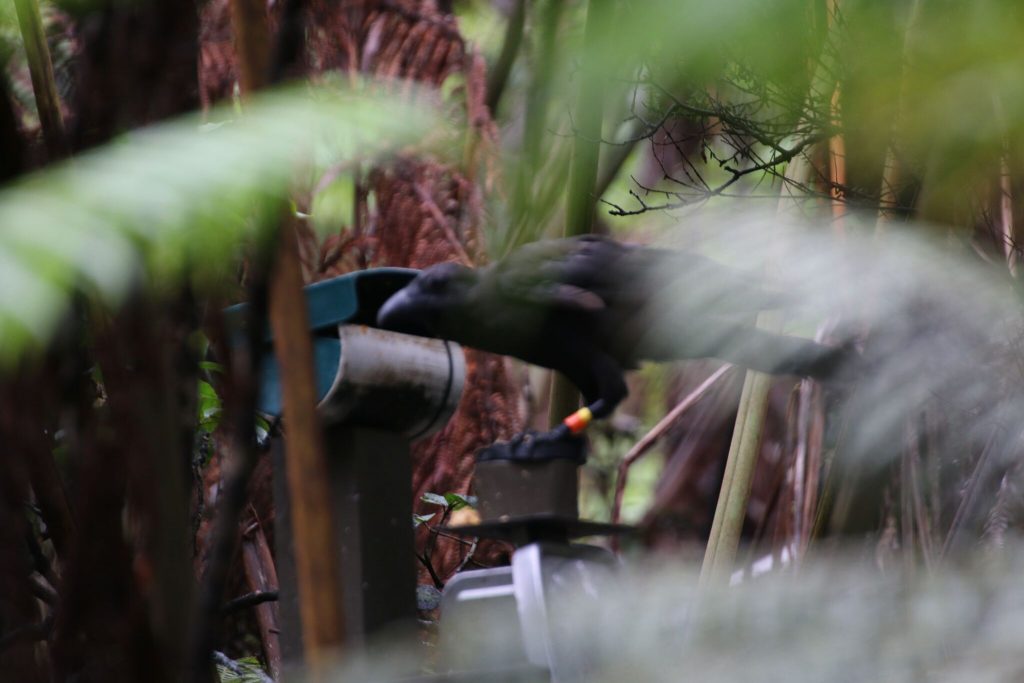 (Hilo) – In their forest home in the Pu‘u Maka‘ala Natural Area Reserve on Hawai‘i Island, eleven ʻAlalā  (native Hawaiian crows) appear to have little difficulty following several days of heavy rains generated by Hurricane Lane. The critically endangered birds, the first to have been successfully released into the wild from conservation breeding facilities last fall, are among the creatures who experienced more than 30 inches of rain during the storm.

As soon as it was safe, staff from the San Diego Zoo Global’s Hawai‘i Endangered Bird Conservation Program, a partner in The ʻAlalā Project, went into the field to check on the bird’s welfare. Dr. Alison Greggor, a post-doctoral research associate commented, “The Hawaiian forest is very resilient and, in that way, the ʻAlalā are also very resilient. Our team got out here as soon as it was safe, and they saw no ill effects on the birds. They weathered the storm very well.”  Department of Land and Natural Resources staff also accessed the site as soon as it was safe, to assess any damage to roads, infrastructure, and check the status of management actions. “Decades of intensive habitat management have made the reserve a unique ecosystem, home to some of the island’s rarest birds and plants”, said DLNR Division of Forestry and Wildlife (DOFAW) Biologist, Jackie Gaudioso-Levita.

The reintroduction team describes the eleven birds as being quite hardy.  They’ve lived in the forest for almost a year, including through one entire winter.  Greggor continued, “They survive very well in wet conditions and they’re able to fend for themselves.  We’ve seen over time that the birds have gotten much better seeking shelter in the forest and finding natural nooks and crevices where they can hide from the rain.” She explained that for forest bird species, individuals that get really wet from prolonged rain can see ill effects when their body temperatures drop. ʻAlalā are known to be highly intelligent but the field team was thrilled that in spite of nearly three feet of rain over just four days, the birds remained unharmed.  This is encouraging news, among known impacts on wild and establishing populations in low numbers, where a single storm can prove to be decimating.

These ʻAlalā, with ten others planned to be released this Fall and dozens of others waiting in the wings, are the subjects of one of Hawai‘i’s most intensive and complex conservation breeding and reintroduction programs ever. The last wild ʻAlalā were seen more than 15 years ago in South Kona. Experts from a host of state, federal, non-profit and private agencies and organizations, all partners in The ʻAlalā Project, have spent years rearing birds in conservation centers on the Big Island and on Maui, managing suitable habitat, and strategically planning their release back to the wild. In addition to last year’s and this Fall’s upcoming release, the plan is to continue releasing birds into native forests for at least the next three years. Ultimately the hope is ʻAlalā in the wild will eventually breed successfully and re-establish their place again in the ecosystem.

Dr. Greggor concluded, “Everyone working on this project is totally committed to its success, rain or shine. It’s so encouraging to see this first set of ʻAlalā in the wild continuing to do well…even after experiencing the impacts of a hurricane. We’ll continue doing everything humanly possible to be sure they and the others to follow in coming years have all the support they need to thrive and survive in their forest homes.”