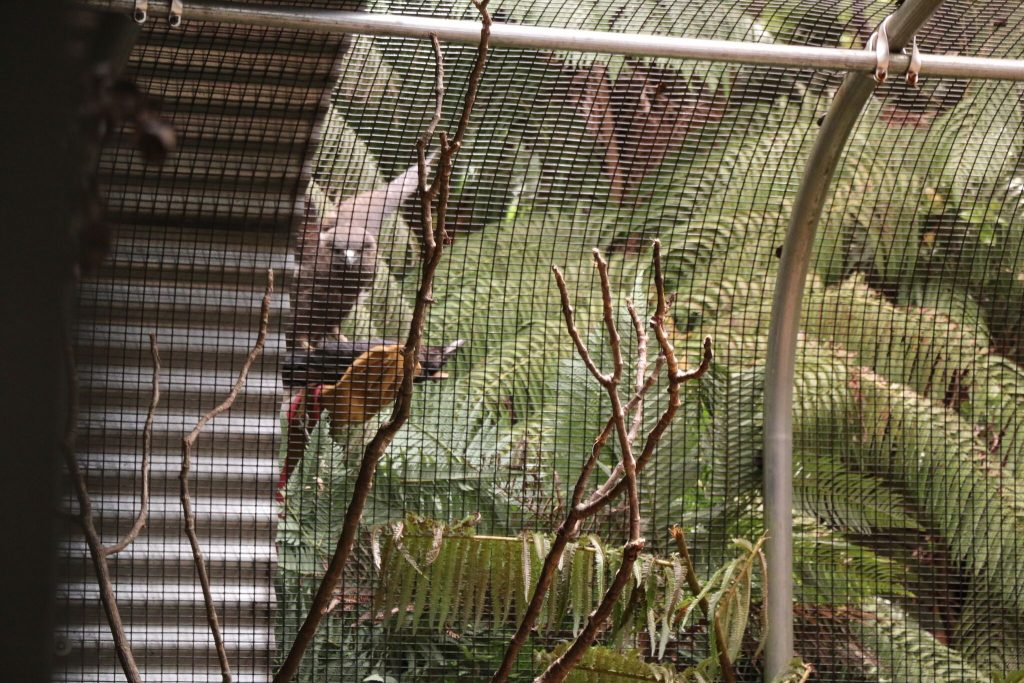 (Hilo) – Anyone close to a flight aviary in the Pu‘u Maka‘āla Natural Area Reserve (NAR) recently would surely have wondered about all the ruckus. The distinctive calls of the ʻAlalā (native Hawaiian crows) fill the air, along with the screech of Kapono, the Panaʻewa Rainforest Zoo’s resident ‘Io (native Hawaiian hawk).

Both the ʻAlalā and the ‘Io are endangered, endemic Hawaiian forest birds, but the ʻAlalā have been extinct in the wild for over a decade. The last wild ʻAlalā were seen in South Kona more than 15 years ago. A remarkable and intensive conservation restoration project being conducted by The ʻAlalā Project, a collective of government and non-government agencies and organizations, is working to restore a self sustaining, breeding population of the crows to their native forest homes.  Project partners include the San Diego Zoo Global’s Hawai‘i Endangered Bird Conservation Program, the Hawai‘i Dept. of Land and Natural Resource’s Division of Forestry and Wildlife and the U.S. Fish and Wildlife Service. A year ago, eleven ʻAlalā were reintroduced into the natural area reserve, where they are now thriving and doing quite well. Later this month, and again early in October, two separate groups (cohorts) of the birds are targeted for release into the same NAR but at a different location.

Prior to the start of the anti-predator training, a team of a half dozen staff from The ʻAlalā Project, gathered to get instructions from the zoo’s Dr. Alison Greggor. She handed out assignments, which included videotaping the birds’ activity and commenting on ʻAlalā behaviors during the introduction of ‘Io sounds and sights into their flight aviary. Greggor explained, “We will look at the videos to see how individual birds and the cohort respond to the audio and visual stimuli…we want to be certain no bird is left behind.”

Scientists have found that many animals, including the ʻAlalā don’t recognize their predators if they don’t have anyone to learn from.  According to Greggor, “These birds, raised in captivity, have never encountered predators in the wild, or had the chance to learn from their parents or their peers about the dangerous predators in their own backyards.  We provide that learning opportunity by mimicking biologically relevant scenarios that they’d get had they been born in the wild.”

The predator aversion training lasts for less than 25 minutes.  With the observers having synchronized their watches or cell phones the observation period begins. Initial observations depict how the birds act before any of the stimuli are presented. At the 18-minute mark the action begins when the birds hear the recorded screech of an ‘Io, as a stuffed ‘Io attached to a pulley system “flies” over the open-air roof of the flight aviary.  Jackie Gaudioso-Levita, The ʻAlalā Project coordinator and a wildlife biologist with DLNR/DOFAW, cut the string beginning the stuffed ‘Io fly-over.  She remarked, “Predatory events have sights, sounds, and cues coming from different directions…so we try and mimic all of those components together.”

Next the team plays ʻAlalā alarm calls. Greggor explained, “The alarm calls communicate, danger, danger, danger.  While the recording plays we present Kapono in a side chamber of the aviary. He flaps his wings and then we start playing distress calls that go from the danger alert to help me, help me, help me.  At that point, a stuffed American Crow is put under the ‘Io’s feet so we complete the full picture from the approach of a predator to a full-on perceived attack.”

Predator recognition and aversion are tactics that have been utilized by other reintroduction efforts, especially those in which captive individuals are released, without knowing any predatory threats.  To get the best response from the ʻAlalā, team members worked cooperatively with  reintroduction experts Tom White of U.S. Fish and Wildlife Service and Debra Shier of San Diego Zoo Global to develop a sequence of stimuli..“We wanted an experience that would instill in those birds a very real fear and recognition of a deadly predator,” says Tom White, a wildlife biologist with the U.S. Fish and Wildlife Service’s Puerto Rican Parrot Recovery Program.

Project team members feel very fortunate to have Kapono from the Pana‘ewa Rainforest Zoo. The ‘Io is glove-trained, and this allows the best mimic of a natural predatory scenario without any actual hurt to the birds. In addition to Kapono, the stuffed ‘Io was loaned to the project from the Bernice Pauahi Bishop Museum in Honolulu, while the stuffed American Crow was gifted to the project from the Yale Peabody Museum of Natural History, over 5,000 miles away. Gaudioso-Levita commented, “Between the collection of props, live and recorded stimuli, and advice from experts afar, training the ‘Alalā is a concerted and innovative collaborative effort.”

Rachel Kingsley, The ʻAlalā Project Education and Outreach Associate, operated one of the cameras during the training.  She said, “The various angles from the video cameras provide invaluable insights to the pre-and post-behaviors of the entire group and of individual birds. At first glance, it appears the cohort responded to predator sights and sounds strongly…just what we want to see happening before these highly intelligent creatures are released into the forest.”

For more on The ʻAlalā Project