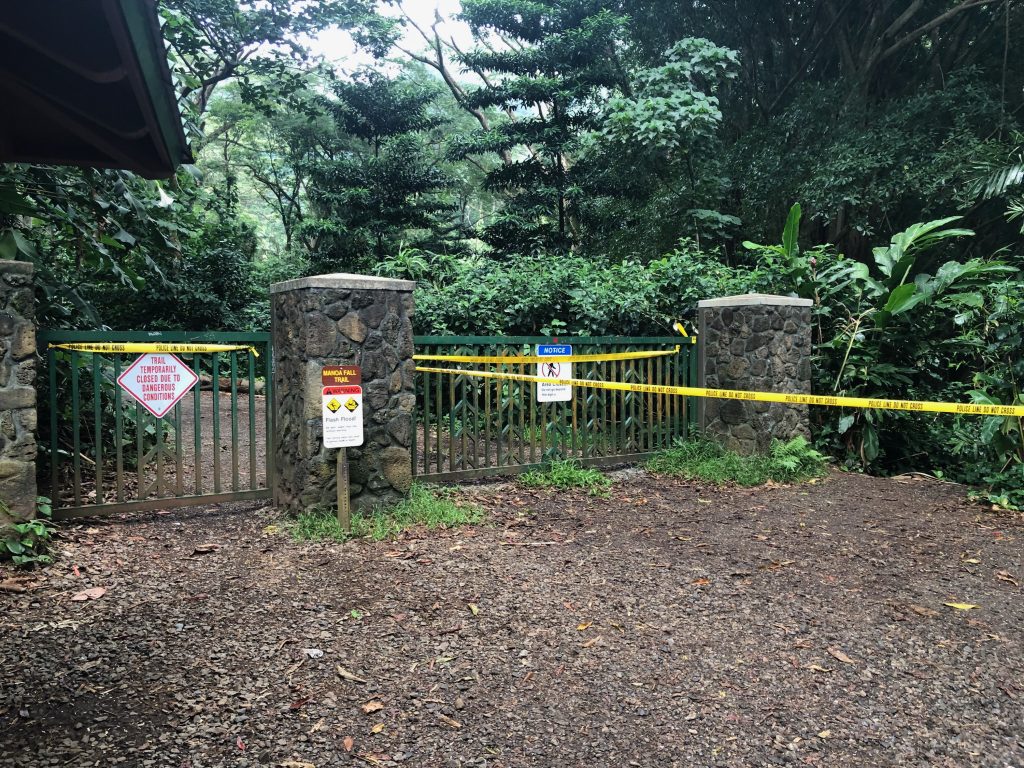 At 1:45 this afternoon, three men were cited by DOCARE officers for entering the closed trail. Officers report seeing the suspects going under clearly visible yellow “police” tape and past numerous closed signs. They allegedly attempted to flee when approached by the DOCARE officers. Cited were 35-year-old Vasily Shedalin from Russia, 31-year-old Martin Bessner from Denmark and 33-year-old Richard Peschke from Germany. Then at 3:00 p.m. another man was also viewed trying to duck under the police tape. He is identified as 42-year-old Shibo Ou of China.

DOCARE Chief Robert Farrell reminds anyone thinking about entering into a closed area, “You put your own life at risk and those of emergency first responders.  Rockfalls aren’t on a clock. They strike with no warning and it’s pretty insensitive of people not to consider the danger they put their potential rescuers in.”

The popular Manoa Falls Trail was closed late Friday, after a rock slide came straight down an unsanctioned social trail that led to the closed second pool Maona falls. The debris covered the nearby Aihualama Trail which is now also closed.  A day earlier, a team from the Nā Ala Hele Trails and Access Program had been standing at the exact same spot.

Aaron Lowe of Nā Ala Hele said, “People really need to take these closures seriously.  Lives have been lost in the past when people enter into areas that were closed for the sole purpose of protecting them.”  Tomorrow Nā Ala Hele crews will place three additional closure signs along the road leading to the trailhead.

State specialists and a private engineering firm are expected to begin the process of assessing the rock slide and future hazards tomorrow. The recommendations from these experts will figure greatly in the decision of when to reopen the Manoa Falls and Aihualama trails.