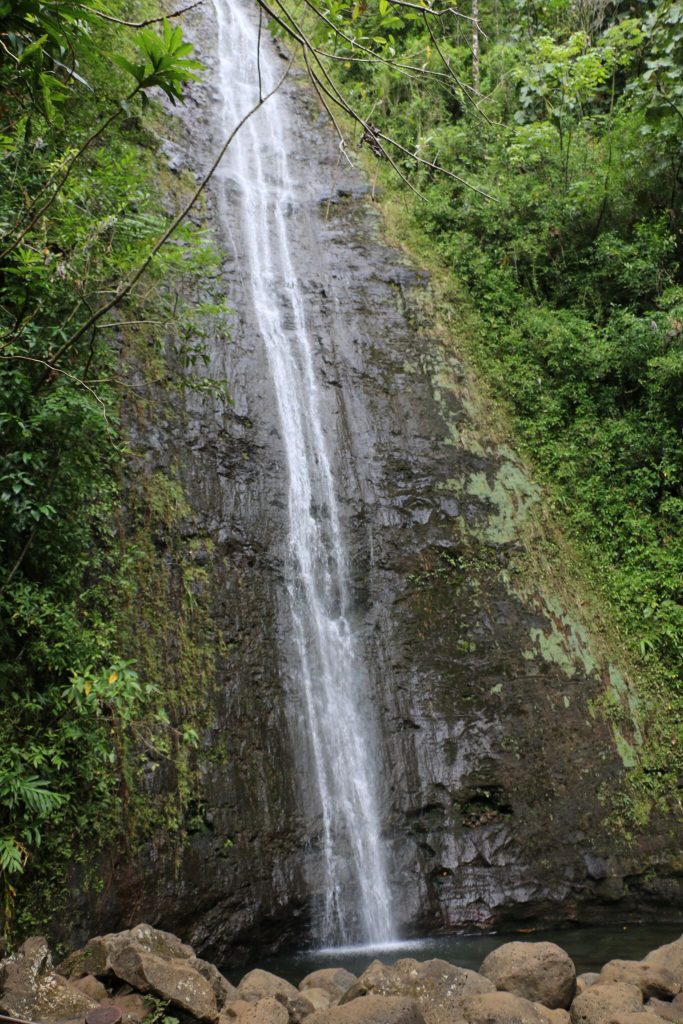 The rockfall was caused by a large boulder that became dislodged. It in turn destabilized several other boulders. It happened just above the junction of the Manoa Falls Trail and Aihualama Trail. The biggest boulder was an estimated 30-feet in diameter. The slide crushed fencing around the Maona Falls viewing platform and destabilized rock out-cropping’s above it.

During the two-week long closure DLNR initiated a two-part survey to identify the origin of the slide and to determine what kind of hazards remained. First an aerial reconnaissance team located where it started and it was determined it originated from an ancient lava flow in the sheer cliff faces far above the Manoa Falls Trail. A ground inspection then showed that another field of boulders lower on the slopes were destabilized and could present additional hazards.

A contracting firm stabilized the immediate area following the hazard assessment. This effort included dislodging loose rocks near the viewing platform and clearing debris that may have impacted the trail in the future. Now that the work is complete both trails are deemed safe again.

Aaron Lowe of the DLNR Division of Forestry and Wildlife (DOFAW) Na Ala Hele Trails and Access Program said, “Although the trails have been stabilized, the possibility for future rockfall events remains. We want everyone heading up to the very popular Maona Falls to use caution and to avoid the trails immediately after heavy rains and flash flooding events” Ample signage identifies hazardous areas and barriers delineate open versus closed areas.

During the closure, nine people were cited for being in a closed area by officers from the DLNR Division of Conservation and Resources Enforcement (DOCARE) and will now have to make court appearances.

In the future DLNR hopes to conduct additional hazard mitigation work and to better align the trail to try and avoid hazard zones.