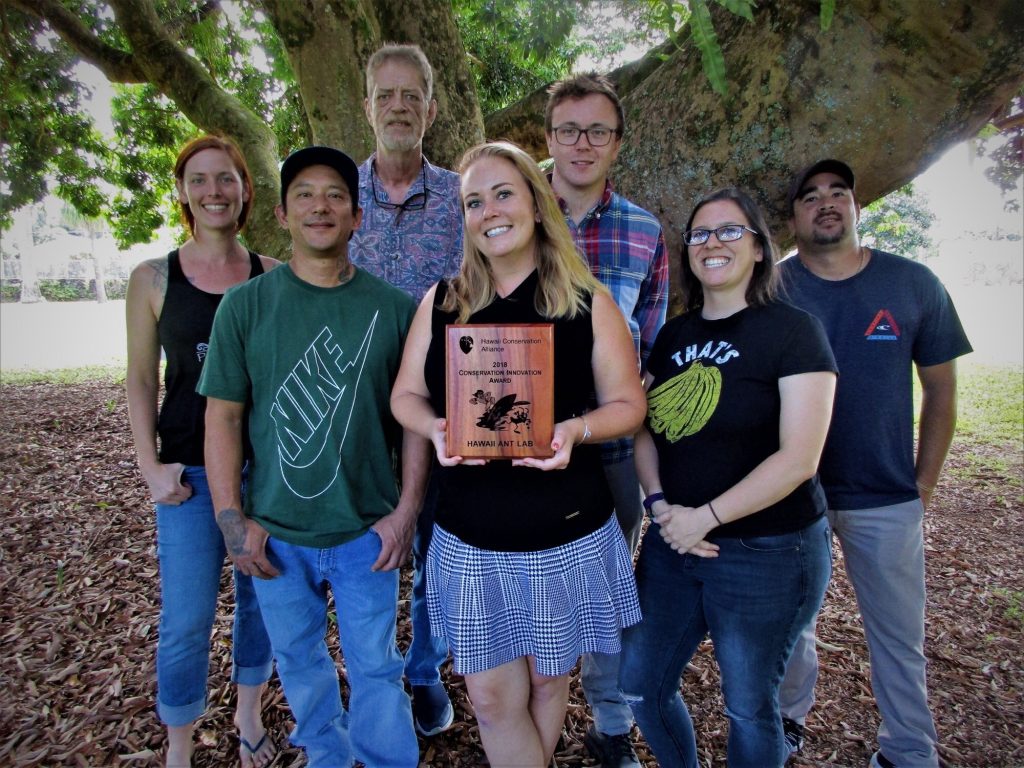 When the Little Fire Ant was discovered on Hawaii Island in the late 1990s, it could have been the beginning of the end for much of Hawaii’s agriculture and our remaining native ecosystems. Twenty years later, the impacts of the ant have been undeniably substantial: residents on the eastern side of Hawaii Island have seen their homes and businesses invaded, tourists visiting beach parks have taken home unexpected welts from ant stings, and the ant has found its way in interisland cargo to Kauai, Oahu, and Maui.

The Ant Lab has produced several innovations to meet these challenges, with one of the first being a new gel bait that can be applied to tree canopies and other vertical structures. The effort has brought the world’s foremost experts on the species to the lab’s headquarters in Hilo. On Hawaii Island, the lab works to assist farmers, nurserymen, and residents with Little Fire Ant management and to slow the spread of the ant as much as possible across the island. The lab also works with the Department of Agriculture to minimize the movement of ants in interisland cargo, and leads both prevention and control projects across the Pacific.

On Kauai, the Ant Lab and partners have rappelled over cliffs on the north shore to remove the sole infestation in Kalihiwai, which is on track for eradication. On Oahu, the team partnered with agencies to remove ants from Mililani Mauka after a population was discovered in December 2013. The area was recently declared free of Little Fire Ant. In Waimanalo, the Ant Lab provides guidance and support to the Department of Agriculture and other partners to remove ants that may be moving in potted plants. On Maui, several small populations have been removed and the team is working with the Maui Invasive Species Committee to design a strategy that will hopefully eradicated the large Nahiku infestation.

“Little Fire Ants remain a serious concern for Hawaii, and many residents and business owners are struggling with the impacts of this invasive species” said Suzanne Case, Chairperson of the Department of Land and Natural Resources and co-chair of the Hawaii Invasive Species Council. “Without the excellent work of the Hawaii Ant Lab, it’s possible that we would have dense, intractable populations of Little Fire Ants on all of the main islands by now.”

Heather Forester, Extension Specialist at the Hawaii Ant Lab said, “Little Fire Ants have the potential to impact everyone. Unfortunately, as humans we are more reactive than proactive, but if you focus your efforts on surveying your property and high-risk materials you bring onto your property, you have the chance to stop Little Fire Ants from establishing. For those of us who have Little Fire Ants, there is hope to manage this invasive; it just takes diligence and follow-through.”

The impacts of the Little Fire Ant are diverse and threaten our agriculture, tourism, environment, human health, and quality of life. On Hawaii Island alone, the ant is estimated to cause approximately $174 million a year in damages. The innovations of the Hawaii Ant Lab have helped Hawaii maintain its goals of growing more local food and protect a tourism industry valued at over $15 billion annually.

October is “Spot the Ant, Stop the Ant” Month, during which residents are encouraged to test their yards and workplaces for the presence of Little Fire Ant. Visit www.StopTheAnt.org for directions on how to survey and for more information about Little Fire Ant prevention and control efforts on your island. For treatment advice, please visit www.littlefireants.com.