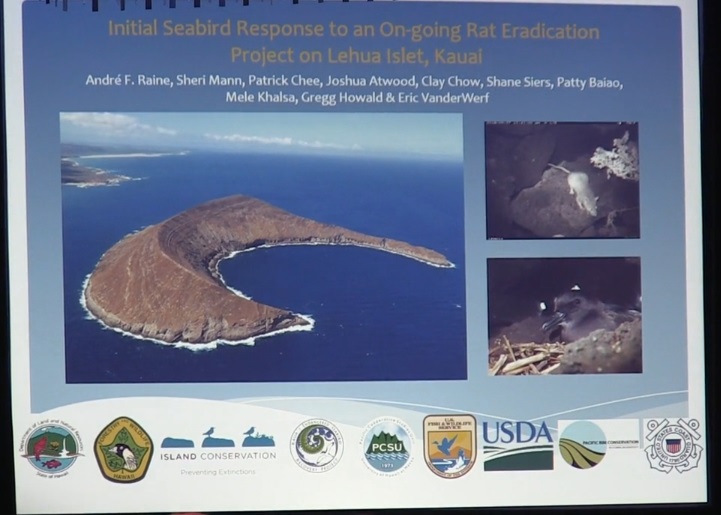 (Lihue, Kaua‘i) – During the four-day-long annual meeting of the Pacific Seabird Group this week, ten researchers detailed the results of programs aimed at reducing the deaths of endangered and threatened native Hawaiian seabirds. They also explained how introduced predators, like cats and rats, continue to decimate seabird populations around the globe.

On Kaua‘i feral cats are considered the biggest killers of seabirds. For many years, game cameras have captured harrowing images of roaming cats pulling tiny seabird chicks and breeding adults from their burrows and then devouring them. Dr. André Raine, project coordinator for the Kaua‘i Endangered Seabird Recovery Project, along with partners including the DLNR Division of Forestry and Wildlife (DOFAW) invest a lot of time, effort, and money into controlling feral cat populations in the mountains of Kaua‘i.

Kyle Pias leads a team of introduced predator control specialists working in the Hono o Nā Pali Natural Area Reserve, which is a prime nesting area for all three species of Kauai‘s endangered seabirds. They utilize a variety of methods to remove feral cats and other introduced predators and their efforts are paying off.

During his scientific presentation to attendees at the 46th Pacific Seabird Group meeting, Pias detailed, “Over the past three years we’ve successfully trapped and removed more cats which has resulted in dramatically lower numbers of seabird deaths.”  In 2016 the predator-control team recorded 31 cat-killed seabirds in their study area alone. In 2017 the number dropped to eleven. Last year there were just five confirmed deaths in the same area. “Obviously,” Pias added, “We want to move the needle towards 100% cat-free in these sensitive nesting areas with zero deaths.”

Governor David Ige was recognized by Jay Penniman of the Maui Nui Seabird Recovery Project for signing into law, regulations making it illegal to feed feral cats at State small boat harbors. He says it’s a step in the right direction but called out feral cat activists who often tout a method of control called Trap-Neuter-Release (TNR).

Penniman cited numerous studies that show that TNR does not work and noted that a 1984 report from the world’s leading conservation body (International Union for Conservation of Nature) indicated cats were responsible for the extinction of 33 species of reptiles, mammals, and birds on islands. More recent studies in 2011 and 2013, according to Penniman shows very clearly that, “TNR does not work. It fails to substantially reduce population size. Cats are a serious problem for native bird populations – a Smithsonian Institute report showed pet cats kill one to 34 birds each year, compared to feral cats which can kill between 23 and 46 birds annually.” Penniman also explained the high-cost of controlling feral cats and keeping them away from seabird breeding and nesting areas.  On Maui he surveyed fourteen organizations engaged in feral cat control and found that collectively they spent more than a half-million dollars on cat control in 2018. He said, “It’s a crime.”

From cats to rats. Two speakers, including Dr. Raine, detailed efforts to rid tiny Lehua Islet, west of Kaua‘i, of invasive Polynesian rats that have been responsible for the deaths of numerous birds annually in the state seabird sanctuary. A collaborative effort, starting in 2017, involved the aerial application of a rat bait aimed at totally eradicating them from the island. It has been largely successful, though efforts continue to rid Lehua of the very small number of remaining rats that have been detected by game cameras.  In total, 238,000 hours of monitoring has been conducted since the last of three bait drops. Raine explained, “The smallest species of seabirds that inhabit the island, like Bulwer’s Petrel, are already responding positively to the island restoration effort, with increasing population trends in the very first year after the bait drop. We expect to see these trends continue into the future with all the seabird species on the island and are hoping for new species to colonize, as our work continues toward the goal of no rats on Lehua.”

Dr. Patricia Baiao of Island Conservation (IC), the non-profit conservation organization that led the Lehua project, spoke about IC’s successful rat eradication projects around the world and lesson learned from their Hawai‘i experiences. IC and other organizations have attempted eradications in 1,200 locations on islands around the world. While the Lehua effort is not deemed 100% successful yet, Baiao explained, “Eradications are very technical and we tend to pay a lot of attention to the technical part of it, but equally important are the regulatory, social and political contexts of eradications.”

People are urged, by Mark Rauzon, a professor at California’s Laney College and Vice-Chair for Conservation for the seabird group, to take the broadest view possible of nature and not to focus on one animal at the expense of other creatures. A cat owner and lover himself, Rauzon worries that people have become so entrenched in their positions, they’re no longer willing to listen.  He said, “I love my cat, so I really understand the compassion and how wonderful cats are. But what I’d say is you can’t look at an ecosystem through a very narrow perspective. Yes, we love cats but cats don’t belong in the wild…cats belong in a loving household where they’re not outside doing what cats do. Cats have a propensity to hunt. Even if they don’t need to hunt they want to hunt.”

Rauzon believes island ecosystem restoration is reaching a crescendo. The best of times and the worst of times he says. Ever-improving restoration techniques have led to vast acres of predator-invaded lands being protected and the saving of millions and millions of seabirds over the past four decades. Yet, worldwide, seabirds and other animals are facing mounting threats from ocean plastics, over-fishing, climate change and human introduced factors like power lines and lights.