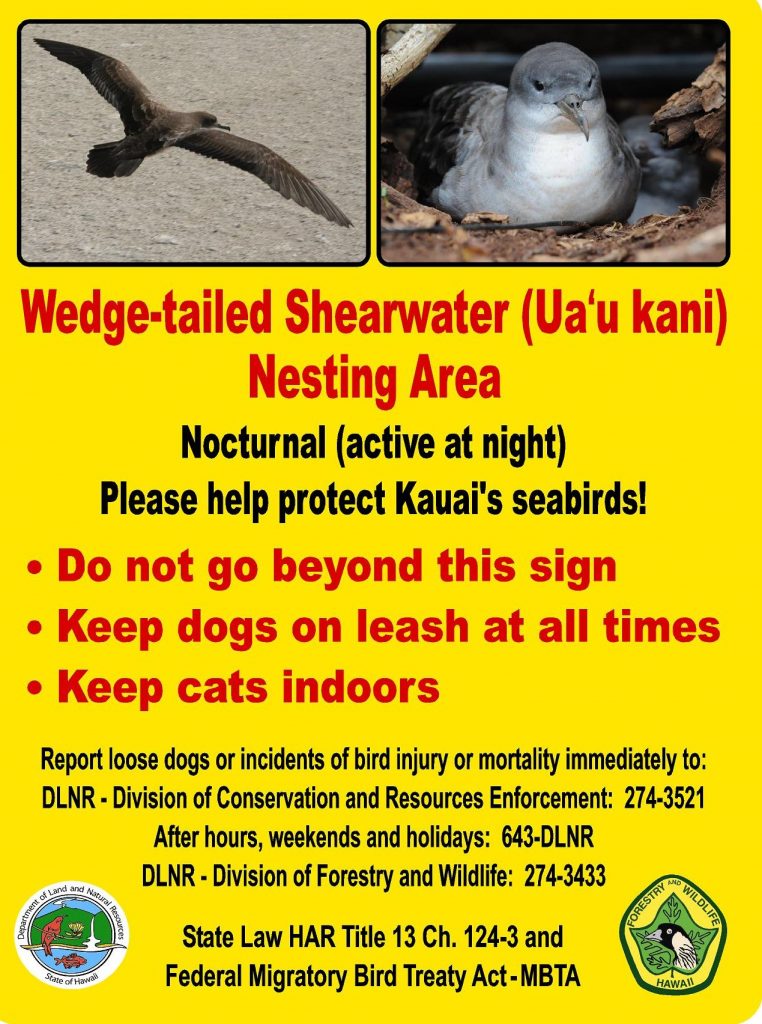 (Li‘hue) – Off-leash dogs and feral cats are responsible for the massacre of between 140 and 150 Wedge-tailed Shearwaters (ʻUaʻu kani)  on Kaua‘i during this year’s nesting season.  The shoreline burrowing seabirds are easy prey for both dogs and cats. In the most recent incident, earlier this week at least 35 birds were found dead.

The kill was reported by a concerned person, and staff from the Kaua‘i Endangered Seabird Recovery Project (KESRP) responded to the incident on behalf of the DLNR Division of Forestry and Wildlife (DOFAW). Shearwater carcasses were found strewn along the cliffs over a large area.

Abby Kreuser, of KESRP, was one of the staff members who responded to the incident. She said, “It was a really horrific scene. There were dead birds everywhere and most of them were chicks that were only a few weeks away from fledging.  It looks like a large proportion of the young birds from the colony have been wiped out, as well as many breeding adults”.

This is not the first year this particular colony was decimated by predators.  Six years ago, 80 shearwaters were killed by cats and dogs over a two-month period.  Although shearwater kills unfortunately happen every year on Kaua‘i, this year has been particularly bad. There have been four reported mass killings, including another incident at a separate colony on the south shore where at least 55 Wedge-tailed Shearwaters were killed.

“These kinds of incidents happen annually, and our shearwaters cannot withstand such a high level of predation,” said Dr. Andre Raine, KESRP Project Coordinator. “We urge people to keep their dogs on leashes in coastal areas and keep their cats indoors.

Kaua‘i is important for a wide range of native wildlife, including seabirds and endangered waterbirds. People are encouraged to report any wildlife killings to the 24-hour DOCARE (Division of Conservation and Resources Enforcement) hotline at 643-DLNR or via the DLNRTip app.