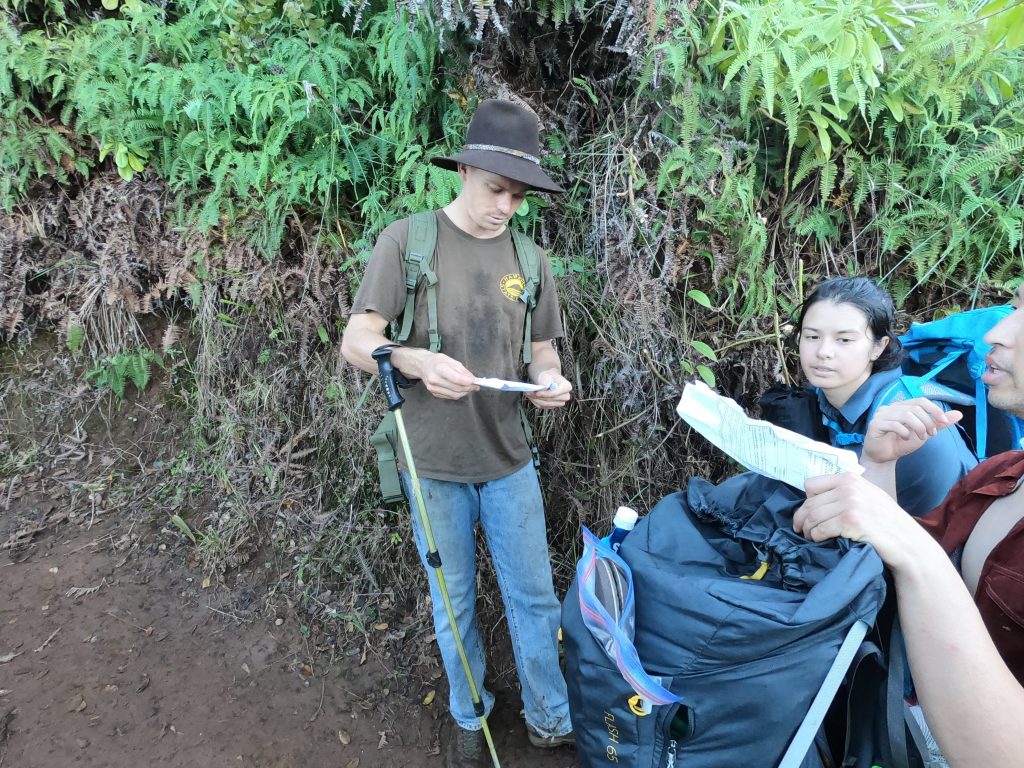 (Hā‘ena State Park, Kaua‘i) – The tools of their trade include the power of persuasion, friendly reminders, and as warranted, the threat of contacting law enforcement.  One of the most visible features of what has been called a “new day” for Hā’ena State Park and the adjacent Nāpali Coast State Wilderness Park, is the presence of park rangers.

These positions are classified as Interpretive Technicians and don’t have any law enforcement powers, but they are on the front line of an enhanced management paradigm shift for this pair of parks, which reopened in June, after being closed for more than a year due to flood damage.

On a sunny, late-November morning, Ronald O‘Brien, one of two “rangers” currently working for the DLNR Division of State Parks, begins his day at the Kalalau Trailhead, joining the first group of hikers to make the two-mile hike into Hanakāpī‘ai Valley.  This is how most days start for O’Brien. He and his fellow ranger, Jacob Bond, (a third is being recruited) engage in tasks that include, checking water levels on the stream, which is the destination for the vast majority of visitors and is also notorious for trapping hikers during flash floods.

Ron, Kaua‘i born and bred, hiked this same section of the world-famous trail a week or two before the historic flooding of April 2018.  He, like most repeat visitors, is both impressed and pleased with the changes evident on the trail and in the park.  Primarily, O‘Brien explained, is the enormous reduction of daily trail users.  Pre-flood, often more than 2,000 a day were either at Hā’ena or on the trail in the Nāpali Coast wilderness park. Post-flood, DLNR State Parks, in collaboration with a hui of county, non-profit, and area residents, implemented many aspects of the new Hāʻena State Park Master plan, including a traffic flow-parking-visitation plan, aimed at capping visitors at 900 people per day.  On most days now, 500 or fewer people hike the trail.

O’Brien said, “When I signed up for this job…I was anticipating it being a lot harder, because I thought it was going to be a lot more like it used to be.  Seeing the changes that have been made, it’s been a real relief. There were too many people in here before, which made it far more dangerous for everyone, particularly in places like Hanakāpī‘ai where most people end their hikes,” (travel beyond this point requires an overnight camping permit).

The Hā’ena/Nāpali rangers focus on safety first. During one of Ron’s recent tours of duty he showed dozens of people how to safely cross Hanakāpī‘ai Stream.  After watching parents allow their kids to wander up to the ocean’s edge, with towering breakers headed to shore, he warned them to stay out of the unpredictable, heavy winter surf. Dozens of people have been seriously hurt or drowned while crossing the stream in high water or when they got too close to the shore break.

While he was talking to ocean-goers, the sound of a major rock fall echoed up and down the beach.  Mere minutes earlier he’d asked people sitting directly beneath Hanakāpī‘ai’s crumbling cliffs to move away for safety.  After the large rock fell and split into several smaller pieces, he again warned people, imploring them to move away. “Hey, you guys, did you notice the rock that just fell? I don’t know why you guys are still sitting here. You should probably move away from the dangerous rock fall area,” O‘Brien encouraged. It’s an endless cycle and rockfall is one of many natural hazards in a wilderness park.

Prior to the new management paradigm of these parks, there wasn’t much hope for breaking the cycle. An important piece of the puzzle, including other enhancements like the new shuttle system, was the state legislature’s funding of ten new State Park positions – three of which are for Hāʻena/Nāpali. Soon the rangers will expand their influence to Kalalau beach and valley, at the end of the trail, eleven miles in. Early reports from backpackers, with permits to stay overnight in designated camp spots at Kalalau, indicate the wild west atmosphere that permeated the place for decades, is largely gone. While checking permits, Ron repeatedly confirmed the sense that Nāpali Coast is surely turning back into the wilderness experience that was always intended.

Keeping a keen eye on permits, especially in Kalalau, they’ll be equipped with satellite phones to contact emergency responders when needed. The technicians will support the management goal or ensuring only permitted campers occupy the sensitive and dramatic ecosystem at Kalalau.

These new positions will have the capacity, after additional training, to not only check permits, but to render first aid, conduct interpretive discussions, support trail and park maintenance activities, coordinate with law enforcement and county lifeguards during hazardous surf and weather conditions, and protect both natural and cultural resources from misuse.

While the rangers can’t ticket or arrest anyone, they have escorted unpermitted campers from the park, and occasionally need to explain to people that smoking and drinking are illegal in state parks. All in all, O‘Brien concluded, “It seems like everybody’s really stoked to see us out here, locals and visitors alike. They thank us, and they complement us on the status of the trail and the beauty of this area. We don’t have anything to do with the amazing natural characteristics here, we just want to keep it this way.”