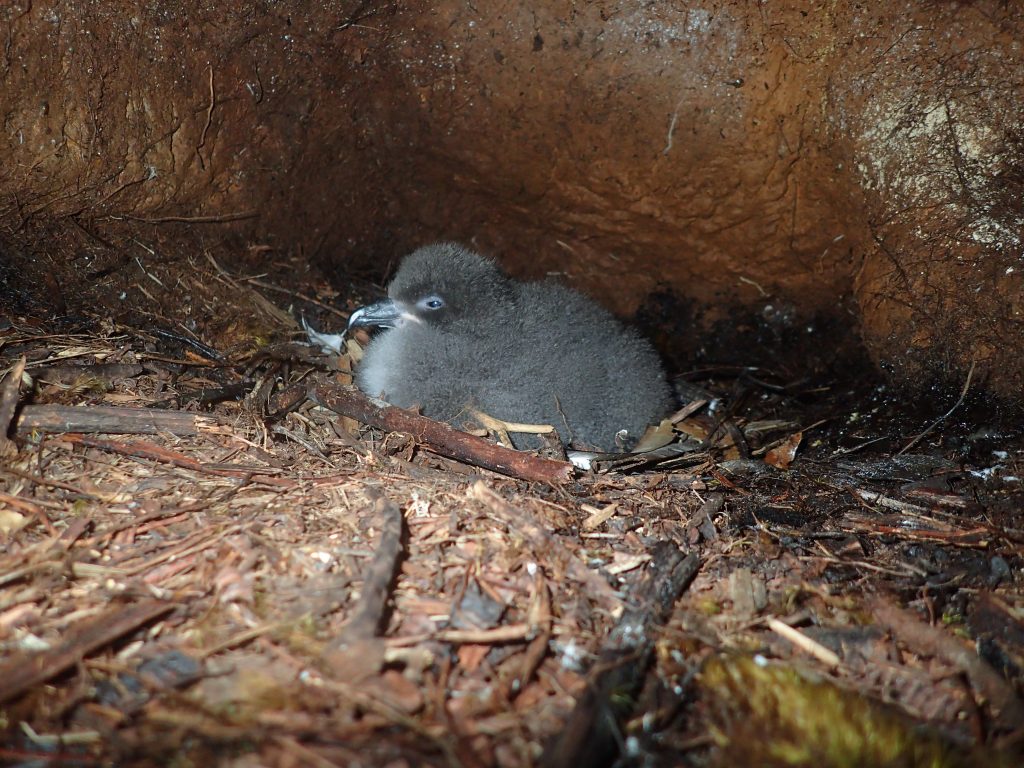 Lihu‘e – The killing of an endangered Hawaiian Petrel chick involved in a tracking project highlights the continued threat of feral cats to native wildlife on Kaua῾i. The chick had been satellite tagged with two others as part of a research project by the Kaua῾i Endangered Seabird Recovery Project (KESRP) to locate the petrel’s first oceanic wintering grounds.  When the tag continued to transmit from land over several weeks, researchers returned to the bird’s forest burrow in late November to find it had been killed by a cat. The kill was caught on a camera that was hidden to monitor the burrow.

KESRP Project Coordinator Dr. André Raine said, “It was heart-breaking to find this healthy chick torn apart by a cat, especially when we saw the tracks of the other two birds that were satellite tagged, one of which has now flown more than 5,000 miles since it fledged and left its nest”.

Sheri S. Mann, the Kaua‘i Branch Manager for the DLNR Division of Forestry and Wildlife (DOFAW) explained, “The three Hawaiian petrel chicks were tagged in their burrows on November 12, 2019  in a remote area in Hono o Nā Pali Natural Area Reserve (NAR), as part of a study by KESRP to learn more about this poorly known species’ post-fledging movement patterns. The only other petrel chick tagged previously by KESRP had been tracked to the waters off Guam, 3,700 miles away, leaving us to believe this species is a strong flyer with vast areas it flies to across the Pacific.”

The burrow camera recorded the cat entering the burrow, pulling the fully-grown chick out, and eating it in front of the camera, likely hours before it was about to fledge. The same cat was seen on camera at five other burrows in the NAR over the course of a few days and researchers believe it killed at least one other chick. Predator control teams were notified, and they continue to search for the elusive cat as well as other predators.

These native Hawaiian seabirds evolved without any mammalian predators and have no defenses against them. On Kaua’i they are now restricted to the most remote, mountainous areas on the island and are in serious decline. Causes include powerline collisions and introduced predators, such as cats. Unfortunately, feral cats are numerous on the landscape and have very large ranges, meaning they can roam across multiple seabird colonies where birds such as Hawaiian Petrels become easy prey.

Dr. Raine said, “Kaua’i is a “Noah’s Ark” for many endangered bird species. Having feral cats loose on the landscape is not good for the cats, which risk disease and an untimely death, and it’s also terrible for our native wildlife.  They target native seabirds across the island. In late 2019, we documented more than 150 Wedge-tailed Shearwater kills along the coast and multiple cat predations of Hawaiian Petrels and Newell’s Shearwaters (both of which are critically endangered) in the mountains.  It is vital that people take feral cat management seriously to ensure that birds like this Hawaiian Petrel chick survive to take their first flight”.

Raine continues tracking the two remaining petrels. Their satellite tags have provided invaluable information from the ocean areas that are important for the birds’ survival. The KSERP and DOFAW are learning how to use new technologies and methods to monitor predators and ultimately protect endangered birds from them.