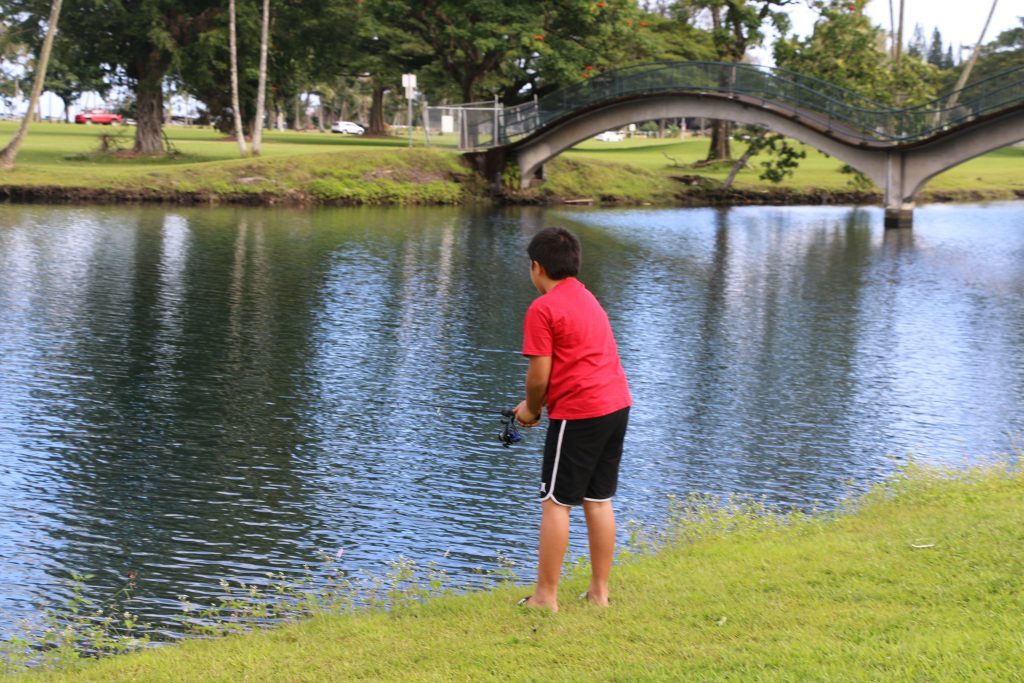 (Hilo) – 129 anglers, or all ages, registered for the week-long Wailoa River Tilapia Fishing Tournament, staged by the DLNR Division of Aquatic Resources (DAR) and other partners. It wrapped up yesterday with an awards and outreach event at the Wailoa Art Center.

Young fishermen, 7-year-old Truston Duarte-Keli‘ikoa and his 9-year-old brother Easton, were the first to try their luck on the banks of the placid waterway in Wailoa River State Park. By mid-morning, their buckets were empty, so they gave up and walked over to the art center to watch other anglers bring their catches in for identification and weighing. Had they caught any of the invasive fishes, they would have competed in the “Kids 17 and under category;” one of three tournament categories. Anglers using barbless hooks qualified for better prizes. Winners in each category (Adult/Open, Kids, and Special Needs) were awarded trophies for the heaviest fish, greatest number of fish caught, highest accumulated weight, and mystery length.

DAR Aquatic Biologist Troy Sakihara and his team conceived the idea of the tournament after receiving reports that Nile and Blue tilapia had expanded throughout the entire Wailoa River system. Tilapia are known for reproducing quickly and growing fast. They live in a wide range of habitats and have broad diets, meaning they compete with native sport fishes for habitat and food resources.

The 75-pounds of tilapia and 85-pounds of other non-native fish weighed yesterday made a bit of a dent in the Wailoa population. The biggest fish caught was a 5.7-pound Nile tilapia. Sakihara explained that long term, complete removal of the highly invasive fish, is unlikely. Instead, he said, “Our primary goal for the tournament was to highlight the importance of Hawai‘i’s estuary ecosystems for sport fishing.  We wanted to spread awareness of invasive species, like tilapia, and their impacts.”

With people weighing in fish and visiting outreach tables, it appears organizers achieved their goal. At one table, two aquariums with labels, showed visitors the differences between tilapia and other non-native fish compared to species that are common in Hawai‘i’s estuaries, like ‘Ama‘ama (striped mullet) and Āholehole (Hawaiian flagtail).

At another table, representatives from NOAA’s Circle Barbless Hook Program handed out free hooks, and promoted the use of this type of gear, which allows catches to be returned to the water without injury. Staff from the DLNR Division of State Parks and Division of Conservation and Resources Enforcement (DOCARE) also had outreach displays set-up.

Our goal, Sakihara concluded, was to really demonstrate for fishers of all ages that invasive species like tilapia have natural traits that give them great advantages over native fishes. “Unfortunately, at Wailoa and other places around the state, anglers are reporting catching more invasive fish while fishing for native species. We hope everyone concerned about the health of our estuaries will join us in doing everything possible to help protect these vital components of our native environment.”