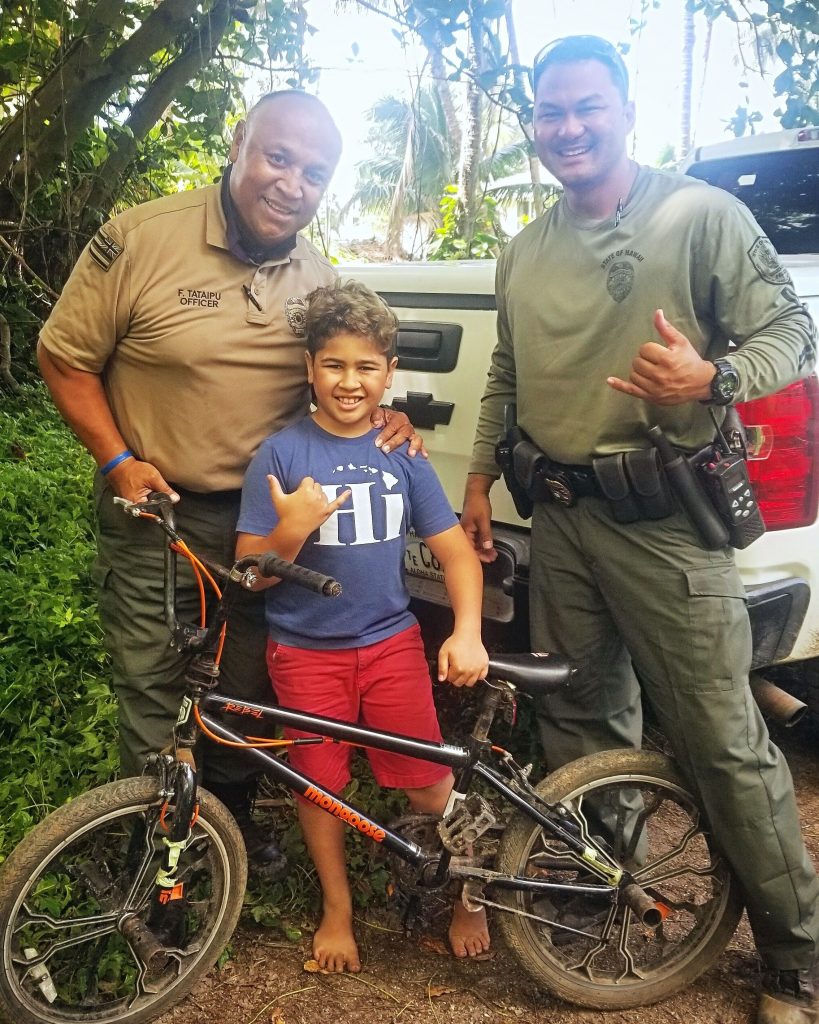 (Honolulu) – Being out of work and out of school coupled with the barrage of COVID-19 crisis news can be particularly tough on families with children. The recovery of Makai Prejean’s bike by a trio of DOCARE officers yesterday could not have come at a better time.

Today the eight-year-old boy’s family is publicly recognizing Junior Tataipu, Jason Lee and Alex McBarnet for getting the bike back, after it had literally been snatched out of his hands by a man on Thursday, while Makai and a friend were fishing. They also thanked DOCARE Supervisor John Silverstein and Officer Kai Kamauu for their assistance.

Makai’s mother Terry wrote this Facebook post, “Nakoa Prejean and I simply have no words that would adequately express our gratitude for the enforcement side of DLNR-DOCARE {Division of Conservation and Resources Enforcement} for what they did for our son Makai today.  I cannot believe they went and searched then found his bike and brought it home. I don’t know how they found it, we searched yesterday for several hours and came up empty. Makai has always looked at them as his heroes but today all our admiration for them was elevated to a whole new level of respect.”

DOCARE officers learned of the stolen bike on Thursday while patrolling long-closed Sacred Falls State Park. On Friday, while two of them went to the falls to look for violators (see companion story below), another headed down a side trail while waiting for a DLNR State Parks work crew to clear a fallen tree. The officer spotted the bike on a property adjacent to the park.

Terry also wrote, “At a time when we are all stressed and nervous about the COVID-19 situation, these guys brought our family so much joy. They demonstrated how a single act of kindness can lift a heavy cloud hanging over a little boy’s head. For a little 8-year-old boy who went through a pretty scary experience yesterday, THIS IS HUGE. It’s a life lesson.”

She says Makai’s spirit had been crushed then the man ripped the bike from his hands. She posted, “We’d gone so far as trying to buy him a new bike but couldn’t find one. When they got home, the officers were there with his original bike. He was so excited and could barely talk. He hugged them tight. After they left, he immediately went in the house and put on his DLNR {DOCARE} shirt, belt and hat. You guys proved to him that good will always come from bad and that he is loved. Thank you so much. He will remember this day forever❤️”

Since the family home is adjacent to Sacred Falls State Park, Makai and his parents frequently see officers patrolling to keep people from entering it. The park has been closed for more than 20 years after a rock fall at the waterfall killed eight people and injured dozens of others. As for the return of his bike, the DOCARE officers said, “We’re just doing our jobs.” 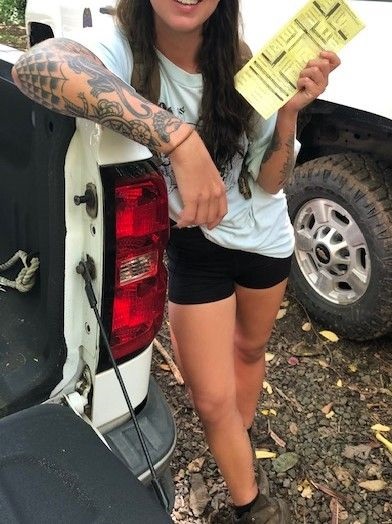 (Honolulu) – Returning a kid’s stolen bike is not in a typical day for DLNR Division of Conservation and Resources Enforcement (DOCARE) officers. On Friday, they were conducting one of their regular patrols of the closed park.

They spotted at least a dozen trespassers, most of whom scattered when they saw the DOCARE officers. Two people were stopped and cited, however. 22-year-old Kaylah Myers of New York was cited for violation of emergency rules. Her hiking companion, 23-year-old Samuel Gillespie, a member of the U.S. Army stationed at Schofield Barracks was cited for being in a closed area.

Sacred Falls is a continuing focus for DOCARE as there are nearly daily reminders of how dangerous it is. During their patrol to the waterfall on Friday, two officers encountered a rockfall into the pool below. They said that had anyone been in the water they could have been killed or hurt. Over the year’s officers have emphasized that fast medical or emergency evacuation from the park is impossible because of the nearly vertical towering cliffs that frame the waterfall.
DOCARE Chief Jason Redulla said, “It appears that some of the tourists who are coming to Hawai‘i and violate the mandatory 14-day traveler self-quarantine rules think they can sneak undetected into Sacred Falls because no one is watching. We appreciate residents like the Prejean family (see companion story above) alerting us when they see people illegally entering the park. We are watching and if you are caught you will be cited or arrested. People have to realize that this is not the place to go, COVID-19 crisis, or not.”