Will be Displayed Behind Glass at the Waikīkī Aquarium 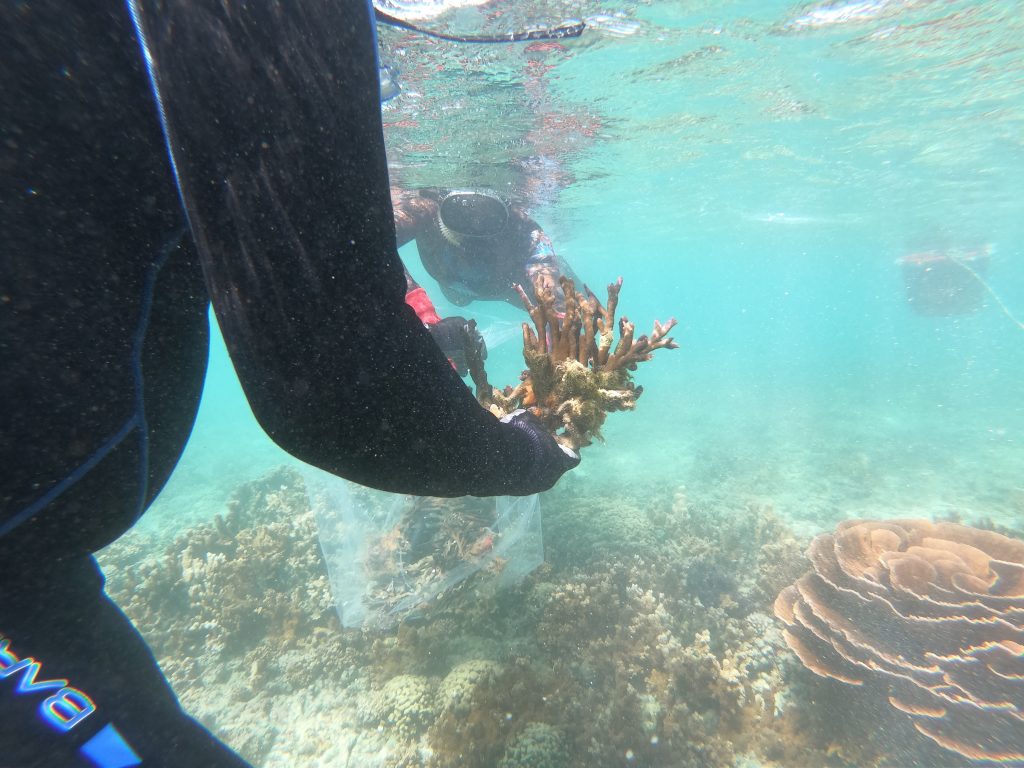 Today, a team from the DLNR Division of Aquatic Resources (DAR), with support from numerous community and partner organizations, began the task of carefully extracting non-native coral species from patch reefs in O‘ahu’s Kāneʻohe Bay. They loaded coral into plastic bags and then onto a barge for transport to shore.

The DAR Aquatic Invasive Species (AIS) Program received the first report of a non-native coral on May 13 from Hiʻilei Kawelo, the Executive Director of Paepae o Heʻeia. She was out with her father, ­­­Gabby Kawelo, who had first observed the unusual corals in 2018. The Kawelo ʻohana is a Native Hawaiian family of skilled watermen who have deep generational knowledge of the aquatic life in the bay. Hiʻilei said, “They didn’t look like anything, anyone in my family has ever seen before, and we’ve been diving regularly in the bay for generations. My sister Kapua and I reached out to members of the scientific community and to natural resource managers. Pictures were circulated to experts familiar with Hawaiian corals, and none of them identified the species observed as native species.”

The AIS team lead, aquatic biologist Kim Fuller explained, “Our team is responsible for rapidly responding to new reports of non-native aquatic species and assessing next steps for management. Non-native species have the potential to become invasive and negatively impact our native ecosystems, the economy and human well-being. It is necessary to respond to non-native species reports in a timely manner before they have time to establish and spread.”

The more widespread and established a non-native species becomes, the more difficult it is to manage or eradicate successfully. A week after the initial report, members of the AIS team joined Hiʻilei to examine the suspect corals. Fuller said, “Twelve colonies appeared to be non-native and comprised of three species. The colonies ranged from 7-inches to 4-feet in diameter.

They included a purple branching coral that was unlike any native branching corals we have observed in the Main Hawaiian Islands. The footprint of the area with the non-native coral colonies was between 7-feet and 9.5-feet.”

Samples were collected from each suspected species and submitted to Dr. Robert Toonen, a coral expert at the Hawaiʻi Institute for Marine Biology (HIMB), for genetic analysis. Samples also were sent to a National Oceanic and Atmospheric Administration (NOAA) lab for further identification. NOAA’s Dr. Doug Fenner identified the orange foliose coral as Montipora foliosa, the purple branch coral as Montipora digitata and the green polyp coral as either Montipora stellata or Monitipora carinita. Bishop Museum also received samples for its collection.

Over the last two months, the AIS team more thoroughly documented colony size and number and conducted distribution surveys in the adjacent areas on the reef.

In addition to consultation with experts from NOAA, US Fish and Wildlife Service, and HIMB, experts from the Heʻeia National Estuarine Research Reserve (NERR) were consulted about species identification and removal of the corals.

Both Dr. Toonen and Hiʻilei Kawelo sit on the NERR’s advisory board and both were pleased by how quickly things came together.  Kawelo said, “The reason why we created the NERR was to help us protect the integrity of Kāneʻohe Bay. I’m glad to see that it’s becoming a space for things to work like they should.

“These corals look a lot like some that I know are popular in the aquarium trade and thorough analysis revealed that they definitely are not native,” Toonen said.

The extracted corals were donated to the Waikīkī Aquarium for bio-secure housing and display. Aquarium Director, Dr. Andrew Rossiter concluded, “The Waikiki Aquarium is grateful for this opportunity to work closely with DLNR/DAR and its partners to remove these non-native corals.They were clearly planted there deliberately several years ago, but do not belong on  Hawai‘i’s reefs. The Waikīkī Aquarium will provide them the only home suitable for these and other non-native corals in Hawai‘i – behind the glass of a public aquarium.”