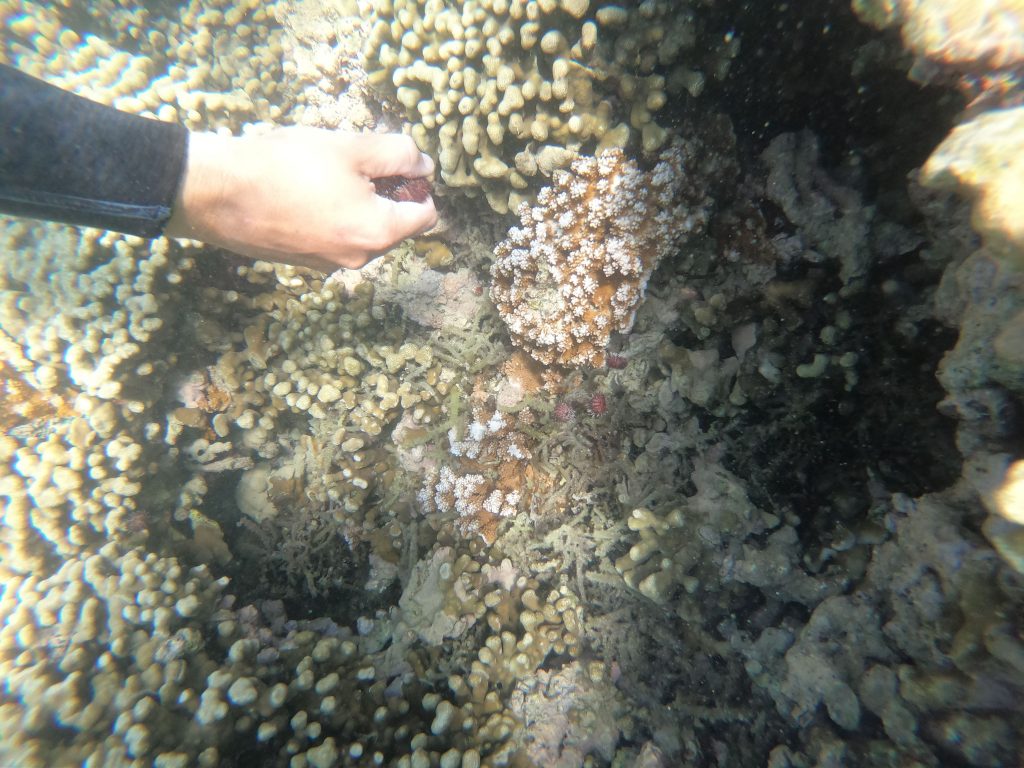 (Honolulu) – From the outside, the State’s urchin hatchery at the Anuenue Fisheries Research Center on Sand Island, is non-descript…maybe even a bit decrepit. However, inside this sprawling building is evidence of what is arguably the most successful effort ever to control marine invasive species in Hawai‘i. Dozens of large tanks hold millions and millions of collector urchins. Their ultimate destiny and destination are the more than 50 unique patch reefs in Kāneʻohe Bay where these tiny “goats” will feed day-in and day-out on smothering, invasive seaweed.

For the past ten years, you could say the staff here has operated an “urchin urgent care facility.” In reality there is nothing urgent about what happens here. Instead it is a well-refined, science-based, tried, and true process of raising native collector urchins and preparing them for graduation to the bay.

During a recent visit, David Cohen, the guy who has led the urchin hatchery from the outset in late 2009, walks through the process of raising urchins as an effective biocontrol against two species of introduced algae or seaweed in the bay. “Twenty or thirty years ago,” Cohen explains, “many of the bay’s patch reefs were completely smothered; in some case’s in up to, one-to-two feet of invasive seaweed. This cuts off light to the corals and ultimately kills them.”

Parent urchins are collected from the wild and brought into the hatchery to spawn. All it takes is a little agitation to enable the hatchery team to collect eggs and sperm. From there it’s onto the larval room where eggs and sperm are mixed with gametes and within 24-hours, large, vertical tanks are filled with millions of free-swimming larvae.

Cohen said, “We look for the healthiest to grow in the larval tanks. At any given time, we have as many as 14-15 million urchins in the hatchery in various life stages, including 20,000-60,000 young urchins, growing and getting ready for out-planting.” After about 26 days growing from larvae to urchin, they are moved into open water horizontal tanks, lining the vast interior of the hatchery. Ultimately, from these tanks, they will be trucked to a boat for placement on patch reefs to begin their work.

On Thursday, staff with the DLNR Division of Aquatic Resources (DAR), Alien Invasive Species (AIS) team, loaded 1,400 urchins onto their boat and headed out to the reef. Using boogie boards to support trays of fully-grown urchins, they hand place them onto the reef, which in this case was showing evidence of more than 5% cover of seaweed. Wesley Dukes, DAR’s Coral Habitat Monitoring Coordinator said, “We’ve had great success, where the majority of reefs in the bay, at this point-in-time, have algae levels that are below our 5% target. The urchins act like little goats, as they graze down the seaweed.”

The AIS team regularly monitors all the patch reefs in Kāneʻohe Bay and whenever one exceeds more than five percent seaweed cover, they respond quickly with another load of collector urchins. Their work has now expanded into the Waikiki Marine Life Conservation District (MLCD), which also has long suffered from an invasion of alien seaweed.

Cohen added, “This has been very gratifying over the years. What we are doing is developing biological tools for environmental mitigation and restoration. The urchins have proven to be key tools for this work in a marine environment and are instrumental in helping save near-shore reefs that are in trouble.”