TEMPORARY SUSPENSION OF CONSTRUCTION OF THE HANAKĀPĪ’AI BRIDGE PROJECT 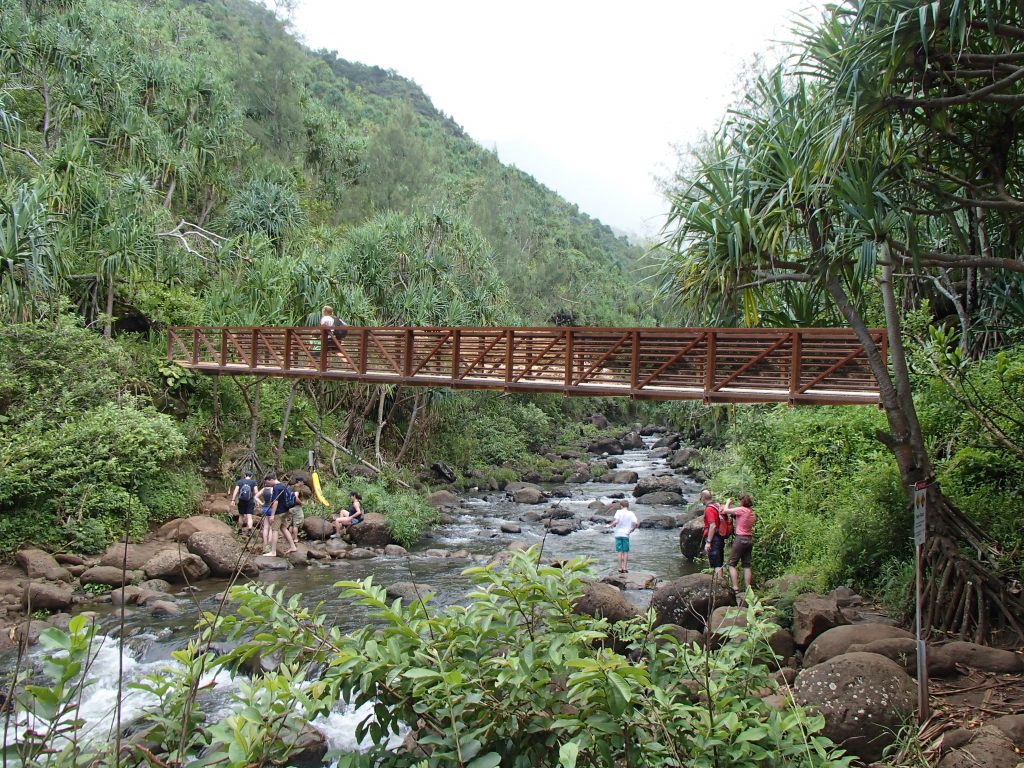 (Honolulu) – Following the death of a hiker and subsequent rescue of 121 flood-stranded people in April, 2014, a meeting requested by members of the Kaua’i Fire Department (KFD) with DLNR Division of State Parks (DSP) staff gave birth to the idea of a pedestrian bridge across the Hanakāpī’ai Stream within the Nāpali Coast State Wilderness Park. The number of aerial rescue operations and the history of flood fatalities compelled KFD to request DSP pursue not only a pedestrian bridge but other safety enhancements in the area as well. Complex rescue operations in bad weather conditions jeopardize the safety of residents, visitors and our first responders.

Kaua‘i Fire Battalion Chief Jason Ornellas stated, “This project was initiated in 2014 with the support of the KFD after several rescues in extremely dangerous conditions threatened the lives of our first responders. Dozens of people have drowned in the Hanakapiai Valley over the years, and KFD personnel have numerous stories – myself included – on the precarious positions we put ourselves in whenever we perform rescues in this area.”

While the new management policy at Hā’ena State Park has successfully reduced daily visitor numbers (and increased the ratio of locals to visitors accessing the trail), and additional management measures installed for Hanakāpīʻai along with an increase in park staffing have also enhanced public safety, the hazard has not been eliminated. The Hanakāpī’ai Bridge Project is a well-vetted effort to create a modern safety feature integrated into a natural and cultural environment. The bridge is intended to safely remove people from Hanakāpī’ai during flash flooding episodes, not to bring more people there.

Hanakāpī’ai stream is a frequent hazard due to the unique topography Hanakāpī’ai Valley, and the areas proximity to Mount Wai’ale’ale, one of the wettest places on Earth.

Fatalities have happened when hikers attempt to cross the stream during flooding and are swept away. In 2017, the trail was closed 27 days, an average of once every two weeks, due to flooding. Dangerous flooding events are increasing due to climate factors, as 2018’s unprecedented rain event on Kaua‘i demonstrated. In the first two and a half months of 2020, prior to the COVID-19 park closure, Hanakāpīʻai stream flooded 16 days, the equivalent of one out of every five days.

After the meeting with the fire department in 2014, DSP staff initiated a series of actions (funding, planning efforts, meetings, permitting) that readied the bridge project. Due to the 2018 flooding event, the project was put on hold in favor of addressing Hā’ena State Park flood repairs and master plan improvements. Then, on December 10, 2019, final bridge approval was granted at the Kauaʻi County SMA public hearing before the Kauaʻi Planning Commission. The project was strongly supported by the County, including testimony from the Mayorʻs Office and the Acting Fire Chief. Bridge construction activities began in July 2020.

On August 10th, several individuals disrupted and interfered with construction in a manner that jeopardized their safety and that of the contractor and helicopter pilot, when they occupied the designated landing zone. Currently there are reports that individuals are undoing the work initiated on the bridge footings. During the initial work on one of the footings, a large pōhaku (stone) where a bridge footing will be located was significantly altered. This was a regrettable design error and is an acknowledged source of discontent.

Due to the interference and potential compromising of the footing work, DSP has halted the bridge work to provide an opportunity to discuss potential design changes. Our path forward will recognize impacts on natural landforms, including pōhaku, which have been scattered and deposited throughout the Hanakāpī’ai stream basin over millions of years of flooding and erosion. Absent understanding and agreement, further disruption will necessitate legal action.

DLNR/State Parks hopes that the pausing of work on the bridge at this time will allow for a period of contemplation as it pursues a more collaborative path toward this critical public safety feature.

Battalion Chief Ornellas concluded,  “The intent of the bridge is to provide a way out, when unforeseen circumstances leave unsuspecting and unprepared hikers stranded and feeling pressured to make unwise choices. Our obligation to protect the public and our personnel is in line with the concept of a foot bridge as a means to provide a safe path out of Nāpali.  As fellow residents and community members, we also understand the cultural sensitivities involved in such a project, and one of KFD’s principles is stewardship for the ‘aina.  We hope that all stakeholders can find a successful resolution so that this project can continue in a manner that is respectful.”