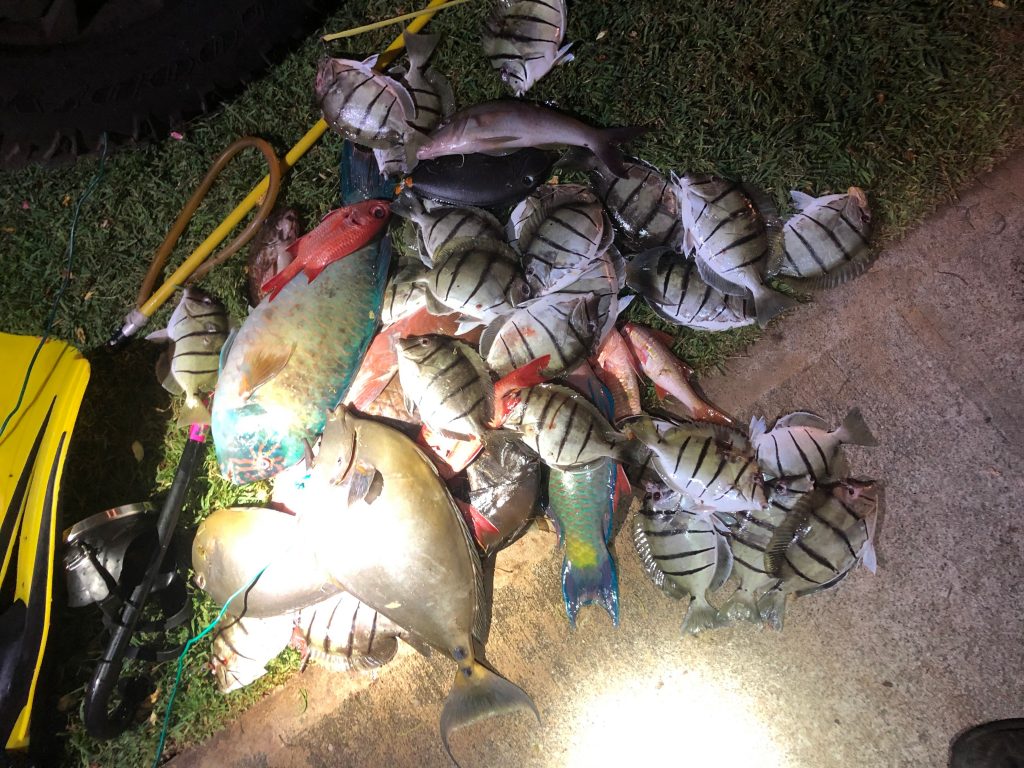 During shoreline patrols of the Waikīkī Marine Life Conservation District (MLCD) and the Fisheries Management Area (FMA), one of the officers alerted his Field Training Officer (FTO) after seeing lights in the water just off of Mākālei Beach Park. Two other officers and another FTO responded and determined there were two groups of divers in the area.

When the first group of two divers came to shore, officers found they were in possession of spears, goggles, fins and a long string of approximately 50 fish. While conducting their investigation, DOCARE officers report the second group of six divers came to shore and were contacted. One of them attempted to conceal his spear in the reef, but it was recovered. This group had approximately 100 fish in their possession.

There are specific rules for various fisheries management areas around the state. For the  Waikīkī FMA, recreational fishing is allowed in even-numbered years, but is prohibited between 6:00 p.m. and 6:00 a.m. The use of spears is prohibited during those hours and all types of take methods are prohibited in closed years, with the next one beginning on Jan. 1, 2021.

All of the diver’s gear was taken into evidence and all of the fish were returned to the ocean. All of the divers were educated on Hawai‘i Administrative Rules regarding fishing in the MLCD and FMA. All of the divers were cited for numerous violations, including prohibited activities, not displaying a dive flag, and having undersized fish in their possession. They have court dates in September and could face fines and/or jail time.

Anyone who sees what they believe to be illegal activity is encouraged to contact the DOCARE hotline at 643-DLNR or use the free DLNRTip app to report directly to officers.