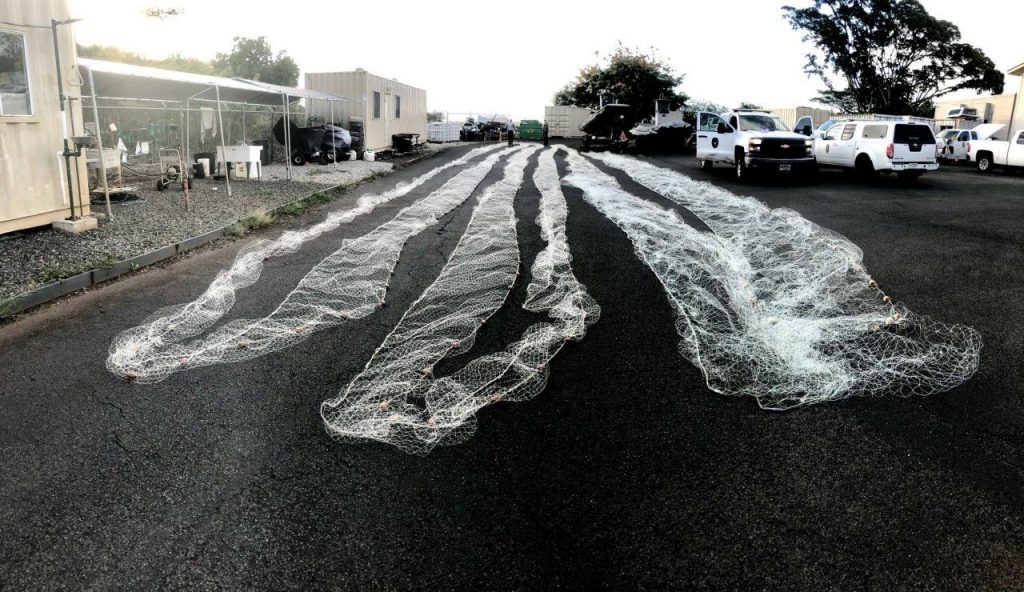 (HONOLULU) – Reinforcing the concept, that it takes everyone to watch out for our natural resources; reports from concerned citizens, along with observations made during routine patrols by the DLNR Division of Conservation and Resources Enforcement (DOCARE) led to two separate law enforcement actions this week. Hundreds of feet of illegal lay net were also recovered or seized.

On Sunday, DOCARE officers spotted an illegal lay net across the Ka‘elepulu canal in Kailua. They watched as a man and woman got into a dingy and attempted to retrieve the unattended net. On shore, 30-year-old Joey Ahwah and 33-year-old Pilialoha Ching were cited for lay net violations in a freshwater stream. During their inspection officers found both dead and live aquatic species. They also found a small eye throw net in the back of one of the suspects trucks. The nets and equipment were seized and submitted for evidence.

Then four days later, on Thursday, officers were notified by concerned citizens about a suspected illegal lay net behind King Intermediate School in Kāne’ohe. A man and a woman sped away from the scene and officers recovered gear and several hundred feet of net.

Shortly thereafter DOCARE officers spotted an unattended lay net floating off the Kahalu‘u boat ramp and recovered approximately 400-feet of net. They found several live u‘lua in it, that were released.

At 12:30 p.m. officers observed a man in a boat, retrieving what appeared to be a monofilament net just off Kapapa islet. When the boat arrived back at, He‘eia Kea Small Boat Harbor, DOCARE contacted  42-year-old Louis K. Watson of Kāne’ohe and conducted  vessel safety equipment and natural resources inspections.

Watson was cited for several vessel safety equipment violations as well as resource violations. A net, aquatic take, and a boat and trailer were seized and submitted for evidence. During their inventory, officers say, they recovered 700-feet of net.

DOCARE Chief Jason Redulla said, “These incidents prove the value of community engagement when people see natural resource violations. Officers obviously cannot be everywhere, all the time, so the tips and calls we receive from citizens are absolutely critical to stopping illegal fishing.”

DOCARE encourages people to boat safely and know all location-specific laws and rules applying to fishing, particularly with lay nets. Redulla added, “There illegal and indiscriminate use causes real harm to our fisheries and to other aquatic life.” You can read fishing rules and regulations for the entire state here: https://dlnr.hawaii.gov/dar/fishing/fishing-regulations/

Anyone who sees what they believe is a natural or cultural resources violation, is asked to call the DOCARE hotline at 643-DLNR (3567) or use the free DLNRTip app.