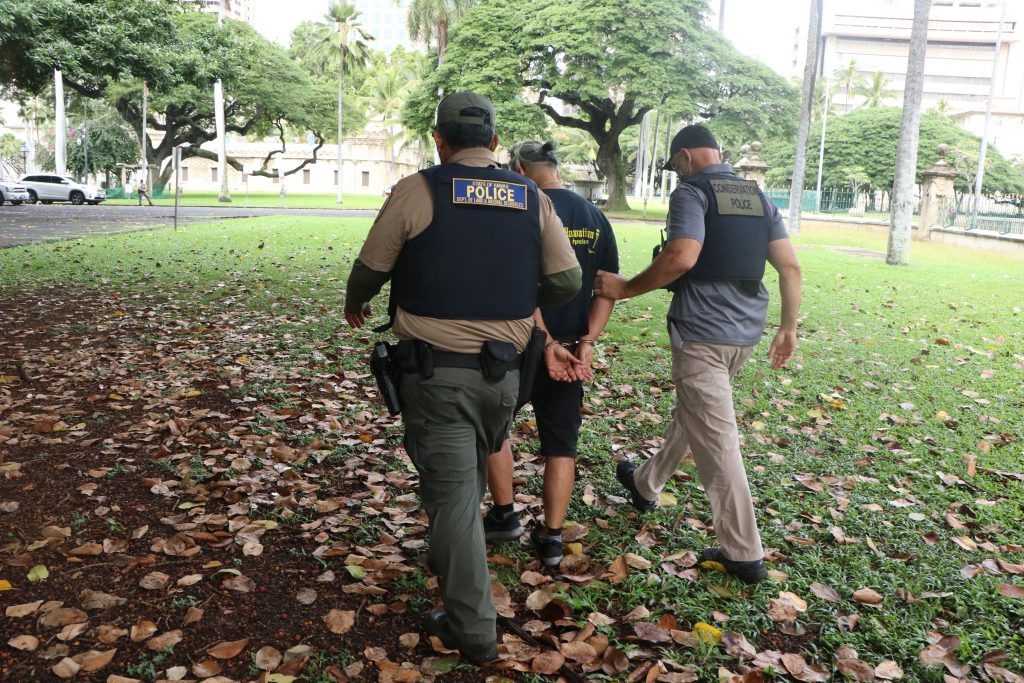 (HONOLULU) – The man behind the illegal “kanaka” garden at Wailoa River State Park in Hilo was arrested at Iolani Palace in Honolulu this morning. 64-year-old Gene Tamashiro of Hilo is charged with entering a closed State Park and violation of the State’s COVID-19 rules.

Prior to his arrest, Tamashiro, and a group of about a dozen supporters gathered in the mall between the State Capitol and the palace. Tamashiro had already informed the DLNR Division of Conservation and Resources Enforcement (DOCARE) that he intended to enter the palace grounds if he wasn’t given permission to gather to mark the anniversary of the overthrow of the Hawaiian Kingdom. Iolani Palace has been closed on Sunday’s, since nearly the beginning of the COVID-19 pandemic.

DOCARE had a heavy presence on the palace grounds, as officers monitored locked gates for anyone attempting to trespass. At 10:30 DOCARE Chief Jason Redulla spoke to Tamashiro and his group and explained that without a permit from the DLNR Division of State Parks they would not be allowed to enter the grounds. Tamashiro produced a long scroll of documents which he claims show the illegal overthrow of the kingdom and questions the legality of ownership of the palace by the State of Hawai‘i.

Tamashiro had a cordial 10-minute long discussion with Redulla. In earlier conversations he’d been informed that he needed a permit to hold an event at the palace. Tamashiro then announced his intention to jump the palace’s ornate fence. Once on the palace grounds, he was immediately handcuffed and led away. He was transported by deputy sheriffs from the Dept. of Public Safety for booking. At this time, he’s being held on $2,500 bond.

Ten days ago, Tamashiro was cited in Hilo by DOCARE for three Hawai‘i Administrative Rules (HAR) violations associated with the illegal planting of the garden in the middle of Wailoa River State Park. He and his supporters had been given a Cease and Desist order two days in advance.