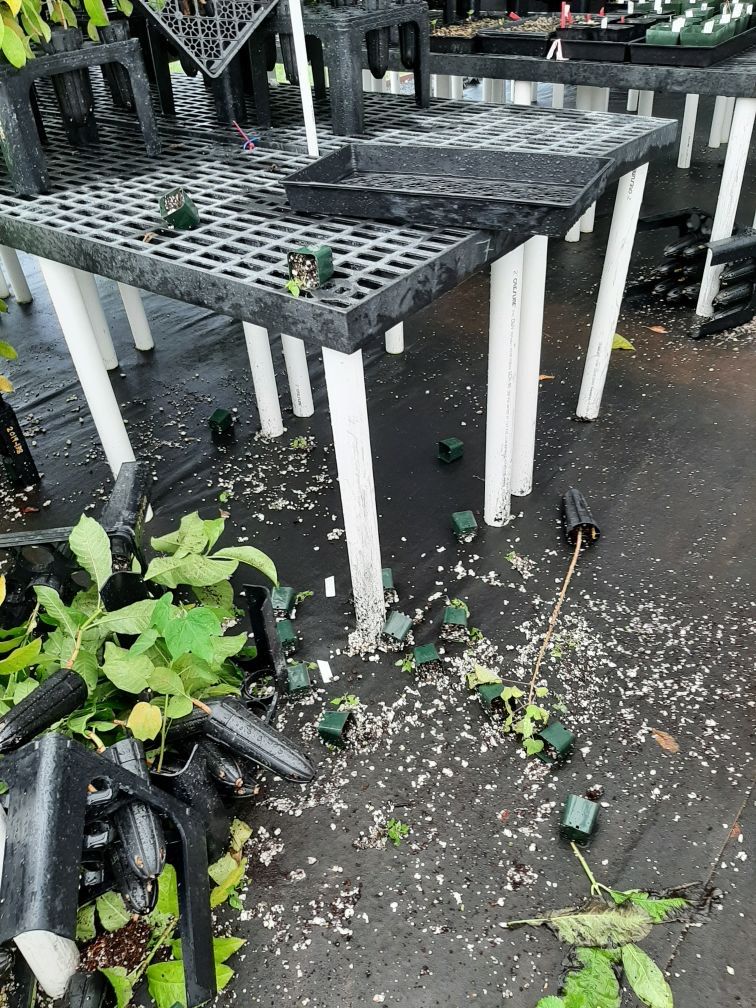 (HONOLULU) – State botanist Susan Ching and her team spend their lives propagating, planting, and protecting Hawai‘i’s rarest plants. Today, Ching was sweeping up the mess left by vandals who broke into a DLNR Division of Forestry and Wildlife (DOFAW) greenhouse at Waimano, likely on Friday night. The dirt all over the floor, the broken containers, and the gaping hole vandals cut to gain entry are fixable.

However, at least four species of extremely rare native Hawaiian plants are now in further peril.

“It’s unfathomable to me that we’re trying to rescue these plants and save them for future generations. And then to see them just maliciously hurt…I don’t think people understand what the value is here,” Ching said. “They just threw plants all around and left the water running.”

All of the plants are culturally and ecologically invaluable. Ching shows the broken remains of a plant that grows on the slopes of Diamond Head. “There are only seven left in the whole universe,” she explained.

Even more rare is the o‘puhea, found only in the Wai‘anae Mountains on O‘ahu. “There’s one single wild individual remaining,” she said. The state’s Plant Extinction and Protection Program (PEPP) has a small grant, to put a certain number of nursery-grown plants into the forest, within a certain period of years. The vandalism is particularly upsetting because the plant is hard to germinate and there’s not much seed left. Botanists, like Ching, are literally in a life and death struggle to save several species of native plants.

Ching said, “We think it happened on Friday. We can tell because the plants were lying on the ground and they were already bending toward the light. I would just hope people could be better educated about what we are growing here. These are not just run-of-the-mill plants that you find at a commercial nursery. They’re endangered and a lot of them are irreplaceable.”

She hopes people will be as incensed about the destruction of these plants, as they were about the slaughter of albatross at Kaena Point several years ago. “It looks like this too, was done in anger, without any feeling or respect, based on how many of the plants were snapped in two,” Ching remarked.

She added, “I hope O‘ahu people are as concerned for this O‘ahu endemic species program. This is directly our responsibility and some of these plants may not recover from this terrible destruction. Once the sole survivor of a family disappears, the species becomes extinct and is gone forever.”

Honolulu police and the DLNR Division of Conservation and Resources Enforcement have opened investigations into the vandalism. Since many of the plants are federally protected, Ching will also be filing a report with the U.S. Fish and Wildlife Service. Anyone with information about this crime can provide anonymous information on the 24-hour DLNR tip line, 634-DLNR or via the free DLNRTip app for smart phones.