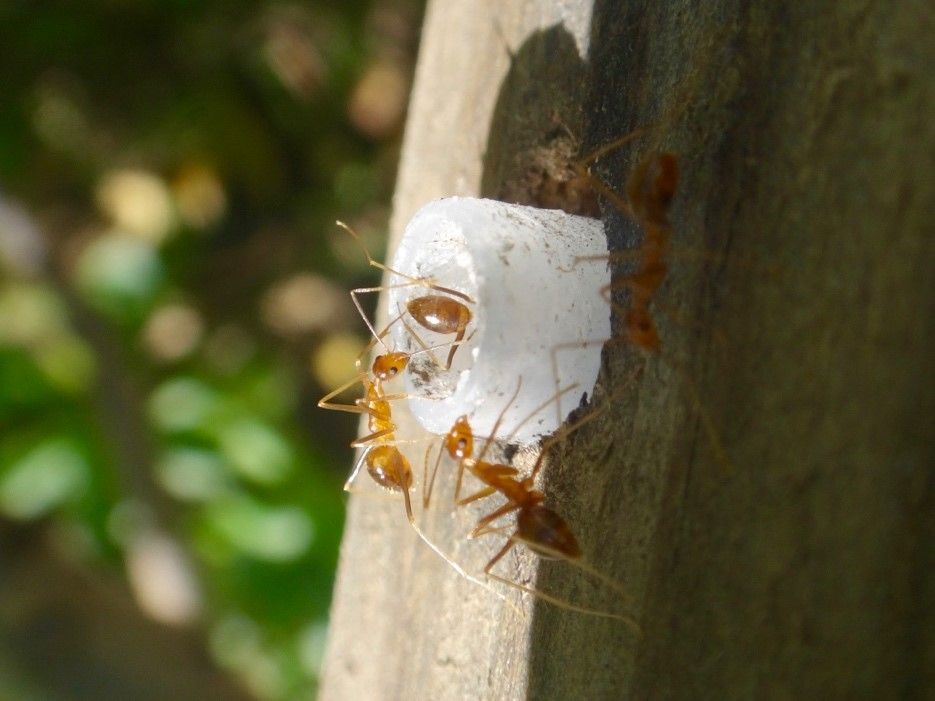 (Honolulu) – Researchers with the DLNR Division of Forestry and Wildlife (DOFAW) and the U.S. Fish and Wildlife Service’s Pacific Islands Coastal Program (USFWS) have discovered the endangered Hawaiian yellow-faced bee, (Hylaeus anthracinus) is being threatened by invasive ants. These findings are the subject of a new paper being published in the open-access journal, NeoBiota.

Invasive species such as ants have adverse, often catastrophic impacts on Hawaiian ecosystems and wildlife, including native insects like Hawaiian yellow-faced bees. This happens by way of direct predation and indirectly via competition. The USFWS Pacific Islands Coastal Program and DLNR are working collaboratively to understand the factors contributing to species declines and develop solutions to stabilize and recover these unique species.

The collaboration between USFWS Pacific Islands Coastal Program and DOFAW evaluated the effects of invasive ants on nesting Hawaiian yellow-faced bees using artificial nest blocks that allowed researchers to observe and track nest construction and development. The blocks are made from pieces of 2’x 4’ and holes were drilled in each to match dimensions the bees are known to use.

The wooden blocks were placed in pairs at 22 points, encompassing three sites on the north and east sides of O’ahu. One block in each pair was treated with a sticky barrier (akin to petroleum jelly) to prevent access by ants while the second block remained untreated.

Cynthia King, DOFAW’s State Entomologist said, “In addition to habitat loss, invasive ants are suspected of causing range reductions and population declines, especially in coastal areas where ants are more abundant. The negative impacts of invasive ants are also amplified across native ecosystems, because the loss of native pollinators can also result in the loss of unique native plant species.”

“Invasive ants are one of a multitude of threats this species faces. You can help protect our native bees by protecting coastal vegetation and staying on trails, keeping motorized vehicles off the vegetation, and not using coastal vegetation and coral rubble for fires or fire pits – they may contain yellow-faced bee nests,” said Sheldon Plentovich, USFWS Pacific Islands Coastal Program Coordinator. “There are ongoing opportunities to get involved and help the bees by volunteering with invasive species control programs and coastal restoration projects. Hawaiian yellow-faced bees are Hawaii’s only native bees and it is important we work together to protect them.”