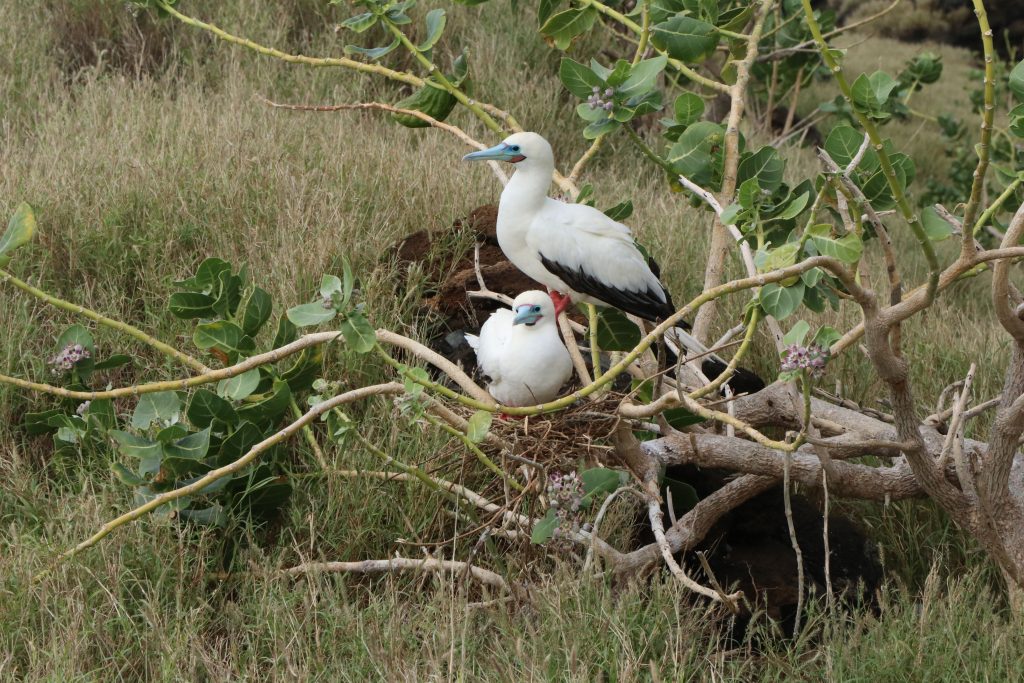 (LĪHUʻE) – Just in time for Earth Day 2021, Lehua Island, the tiny, but mighty island off Kaua‘i’s west shore has been declared free of damaging, introduced (invasive) rats. After many decades, the island is free of invasive vertebrates, enabling Hawaii’s seabirds to safely nest on the steep rocky shores, and native plants to flourish once again.

“After extensive on-island monitoring, we’re 99.99% certain there are no more rats on Lehua, which builds on the successful removal of invasive herbivorous rabbits, and secures a future for Hawai’i’s wildlife and ecosystems,” said Sheri S. Mann, the Kaua‘i branch manager for the DLNR Division of Forestry and Wildlife (DOFAW). Rabbits were eradicated from the State sanctuary for seabirds in 2006 but getting rid of the rats proved more difficult.

“Mahalo to DLNR’s Division of Forestry and Wildlife and all the partners involved for their efforts to eradicate the invasive species on Lehua Island,” said Kaua‘i Mayor Derek S. K. Kawakami. “This great work ensures that Hawai‘i’s Seabird Sanctuary can once again safely host our native seabirds that are so crucial to the ecosystem and our local fisheries.” Mele Khalsa of the non-profit Island Conservation, technical advisor on the eradication, said,

”The operation went really well, and almost immediately we saw signs of recovery across the island. But in the months that followed, cameras captured an unexpected outcome, a small number of rats were still present on the island.”

“Through the strength of the partnership and the State’s leadership we were able to persevere and conduct a mop-up effort to remove the last few individuals,” Khalsa added. A response team was deployed and a robust monitoring effort using motion sensor cameras to detect rat presence or absence was initiated. The team regularly returned to Lehua to treat small areas with bait and to set traps in response to any rat sightings.

Dr. Patty Baiao of Island Conservation explained, “We have collected robust data on the rat activity on Lehua since the eradication operation in 2017. With the success of the mop-up effort, rats have not been detected on the island for over two years. April 2021 marks the one year anniversary since all rat-control treatments were removed from the island, adding to the data that allows us to declare Lehua rat-free”

A February field trip to Lehua included a visit and blessing by Kumu Sabra Kauka, a well-known Hawaiian educator. “It was such a great honor to do a blessing, to see this place, the birds, and the people, who’ve made this wonderful project an amazing success,” Kauka commented. “Oh, my goodness! I can’t wait to tell my students about the absence of the four-legged rodents. About the importance of taking care of the land and the birds. I find the work being done here on Lehua most inspiring,” she said.

Getting rid of the rats enables new possibilities for the birds of Lehua, which supports one of the largest and most diverse seabird colonies in the main Hawaiian Islands. At least 17 seabird spe-cies, many of which are threatened, call Lehua home. During prime summer nesting season hundreds of thousands of birds may be on Lehua at any given time. In the winter, Red-Footed Boobies and Laysan Albatross are among the dominant birds on the island. The partners hope that Lehua might host the endangered Newell’s Shearwater, which has been found attempting to nest on the island but was unsuccessful due to rat predation.

Restoring some of the fourteen native plants, eleven of which are found only in Hawai‘i, is the next step in the project. The National Tropical Botanical Garden (NTGB) is a key partner for plant restoration efforts, as it was after the 2006 rabbit eradication. Mike DeMotta, a NTGB botanist, is looking forward to seeing Lehua completely restored post-rat. “There’s no doubt that the rabbits initially, but the rats in the long-term, caused a lot of plants to disappear.”

The removal of these invasive species is an incredible milestone for the recovery of Lehua Is-land, notes Mike DeMotta, “If you restore the ecosystem, the birds will come. The birds have been coming there long before men were on these islands. It’s an ahupua’a system. Restoring the ecosystem generally will not only be a benefit to the birds, but also any other organisms that are native there. There are probably dozens of undescribed Hawaiian micro moths and other things that are occurring that will really benefit from ecosystem restoration. So, I think a holistic view of restoring the ahupua‘a on Lehua is really an important thing to keep in mind.”

The partners are eager to see how the island ecosystem recovers over the next few years, ex-plains DOFAW’s Mann, “We hope to follow up in the near future with more marine monitoring to compare to the baseline from before the eradication to detect any changes in near-shore waters as a result of the vegetation and species occupation on the island. We know these systems are connected, so we want to monitor them to ensure we understand what’s going on, and can adapt our work accordingly to support ecosystem recovery or stand back and let nature take its course.”

Recent research has shown that rat-free islands with thriving seabird colonies, have healthier nearshore marine systems. The influx of beneficial nutrients from seabird guano can increase the size, health, vigor, and diversity of corals, fish, and top predators such as manta rays in the surrounding waters.

Khalsa, of Island Conservation, has spent more time on Lehua in recent years than any other single individual, and she reflects on the magic of the island. “Lehua has definitely been a ca-reer highlight, and despite the challenges, seeing the island recover and change has been well worth every moment. Lehua is a story of what we can achieve through dedicated and focused conservation efforts, and securing the island has been a critical stepping stone for the protection of Hawaii’s native birds and plants. For now, the birds are happy and we can move on to other aspects of the restoration of Lehua.”

DLNR Story Map – “Lehua Island: Past & Future.” Includes a historical timeline of the island the restoration efforts, as well as a slideshow of birds on the island: https://arcg.is/zb5Cz