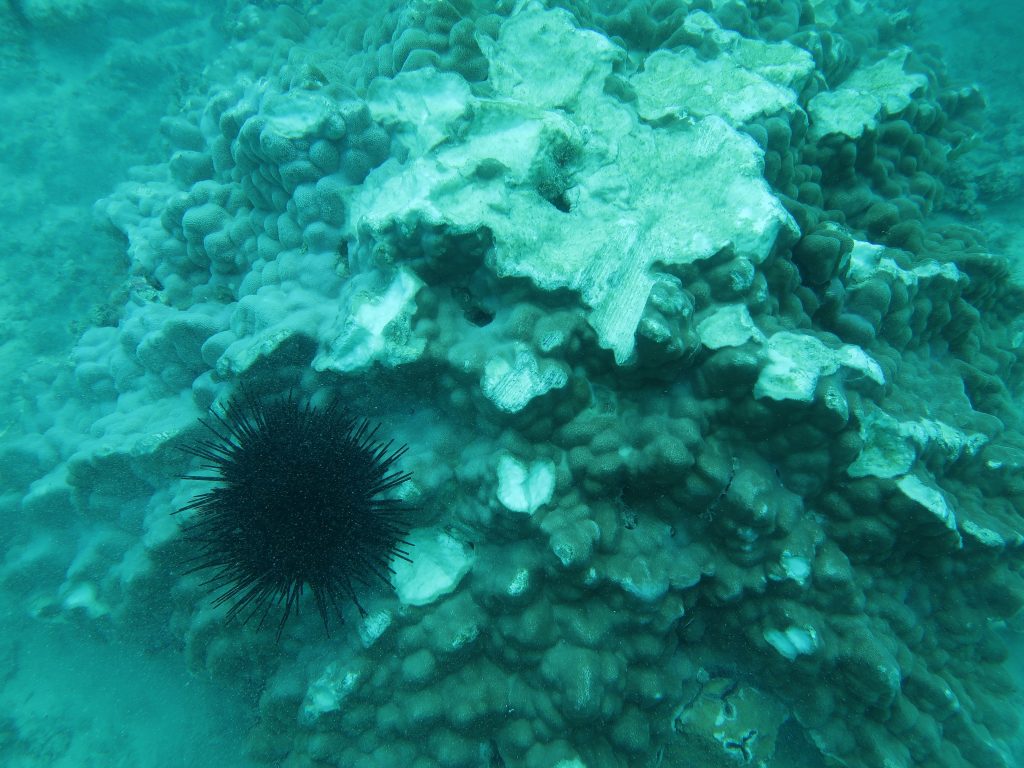 (HONOLULU) – The State is investigating the circumstances associated with what is described as significant damage to corals and live rock near the entrance channel to Honolulu Harbor.

The U.S. Army Corps of Engineers contracted dredging work to the Healy Tibbets Corporation. It is alleged the contractor dragged the dredging platform’s anchor and cable across coral colonies and deposited dredged material on corals.

Divers from the U.S. Fish and Wildlife Service were conducting water quality monitoring on May 4 when they noticed damage stretching across an estimated 17,500 square yards. They photographed broken and toppled coral colonies and dredged material smothering them. The divers reported the damage to the DLNR Division of Aquatic Resources (DAR) which is responsible for coral ecosystems in State waters.

DAR Administrator Brian Neilson said, “This is a large and significant damage event. The last few days our dive teams have been in the water doing further assessments and documenting the scope of the damage.”

On Friday, DAR divers will begin collecting live coral fragments from the area. Using a special marine epoxy, they’ll re-attach some broken corals. Others will be collected and taken to the Anuenue Coral Restoration Nursery on Sand Island, where specialists hope to grow them out for eventual return to the ocean.

Particularly disturbing, is damage to a Porites evermanni coral colony estimated to be several hundred years old. A 2019 photograph shows a healthy colony. Last week’s photo appears to show the extremely large colony of live coral overturned and lying on the bottom, in danger of dying due to suffocation. Due to its size and weight, specialized equipment will need to be brought in to try to lift the colony and return it back to its upright position. Righting the coral as soon as possible will increase its chances of survival.

“We’re already seeing mortality among some of the corals that were damaged,” said David Gulko, manager of the state’s coral restoration nursery. “Time is of the essence, with the summer’s first south swells imminent, so we need to fix as much damage as we can, quickly.”

In a statement, provided today to DLNR, Emmett Kinney, Vice President of Healty Tibbitts Builders Inc. said, “Healy Tibbitts understands the significance of Hawai‘i’s precious natural resources, and we are committed to doing everything we can to take immediate restorative action and mitigate further damage to the coral reef. To that end, we have retained help from Marine Research Consultants, Inc. and Sea Engineering, Inc. to rapidly commence mitigation and restoration efforts.”

Assessment data and photographs will be used to document the damage for possible presentation of the matter to the Board of Land and Natural Resources, which has the authority to impose fines on the responsible parties to pay for resource damages and remediation efforts.

In 2009, a U.S. Navy missile cruiser, USS Port Royal, ran aground and damaged both the ship and the coral reef within sight of the Honolulu International Airport. The Navy agreed to pay $8.5 million to the State of Hawai‘i, the largest settlement ever at that time, for reef damage. During repairs, divers collected and reattached 5,400 loose coral colonies.