ONE COMMUNITY FIGHTS FIRE AS ANOTHER IS FIRE WISE 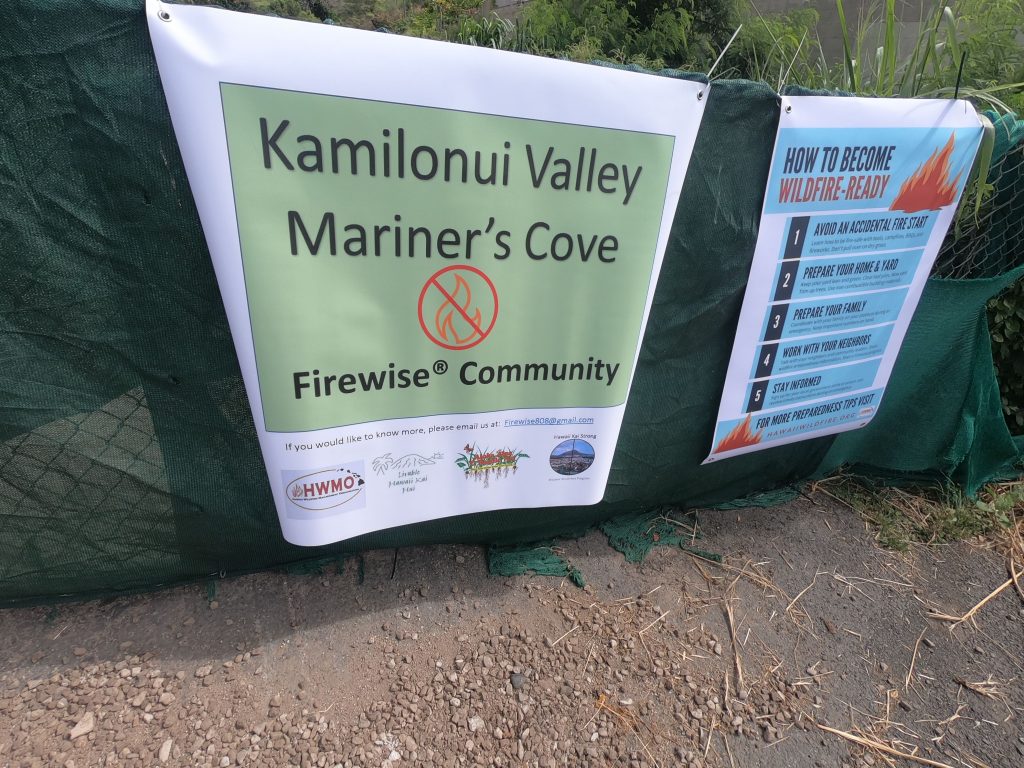 (HONOLULU) – As rural residents on Hawai‘i Island feared they could lose their homes overnight, suburban residents in East O‘ahu demonstrated today their proactive approach to making sure wildland fire does not strike their neighborhood.

More than 50 county, state, and volunteer firefighters battled a 1400-acre wildfire, burning through underbrush and Eucalyptus trees on private land between Antone De Luz Road and Pohakea Road in Pa‘auilo along the Hamakua Coast.

It was first reported late yesterday morning. At 2:30 p.m. today the fire is 80% contained. Initially, 15 homes and 10 other structures had been threatened by the fire.

The region is typically on the wet side, but wildfire experts say in this era of global climate change even moist areas can become susceptible to wildfires.

This is why, three years ago,  a suburban neighborhood in Hawai‘i Kai and its adjacent agricultural area became  O‘ahu’s first, and so far, only Firewise community.

Kamilonui Valley and Mariner’s Cove are designated as one of 15 Firewise Communities in Hawai‘i. Four are in Maui County, and the remainder are on Hawai‘i Island. The national program helps communities assess and develop action plans to protect homes and property from wildfires.

Matt Glei of Hawai‘i Kai Strong explained, “Beginning in 2014 we began doing a lot of education in our community about disasters. Hurricanes, tsunami, earthquakes, and floods are the big four, with wildfire right behind.”

In 2017 and then again in 2018 the area experienced as many as 18 wildfires in the back of the valley and along a road coming out of the valley between dozens of Mariner’s Cove homes.

Community activist Elizabeth Reilly of Livable Hawai‘i Kai Hui explained, “We felt we needed to be proactive and understand the dynamics of wildfire and we were fortunate to find the Hawai‘i Wildfire Management Organization (HWMO) which provides the intelligence and expertise to get communities started on the Firewise process.

There are approximately 450 homes between the two communities, with the valley being largely agricultural. “A lot of residents don’t seem to understand that what they do on their front lawns, helps. What they do in their back yards, helps. Keeping your brush down, your trees trimmed and not piling vegetation and throwing it over the back fence, all collectively helps,” according to Reilly.

Backers of the Kamilonui Valley/Mariner’s Cove Firewise Community are already in contact with at least two other O‘ahu neighborhoods and providing them with information and advice on how to navigate the process. Today, they had informational tents set up in both the valley and in the residential area and shared information about being fire wise.

HWMO representatives plan to contact residents in Pa‘auilo to gauge their interest in becoming a Firewise community.

Next week DLNR/DOFAW, HWMO, and other wildland fire agencies around the state, will kick-off the annual Wildfire and Drought LOOKOUT! campaign, which extends and promotes wildfire prevention and protection messaging across the traditionally dry summer and fall months.