ONE SMALL BIRD PROVIDES GLIMMER OF HOPE FOR SAVING A SPECIES

Kiwikiu Given Up for Dead Discovered in Maui Natural Area Reserve 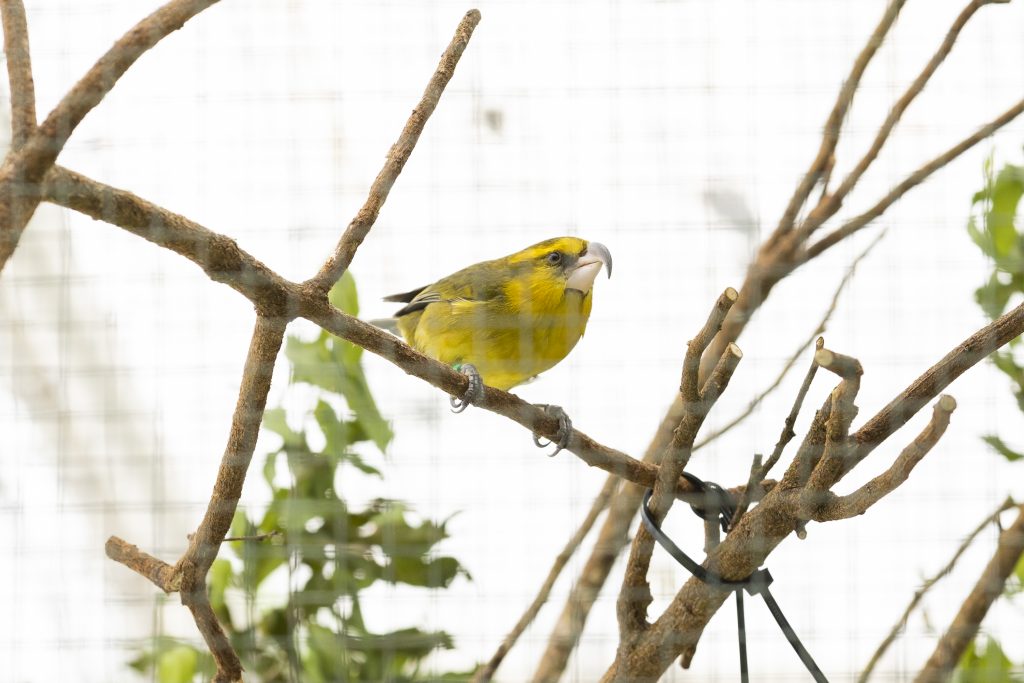 (Kahului, Maui) – A remarkable discovery on Wednesday is providing a morale boast and hope to the dozens of experts working to save kiwikiu from extinction. One bird, released into the Nakula Natural Area Reserve (NAR) on the leeward slopes of Haleakalā, was found alive and well, after being thought dead for 605 days.

Zach Pezzillo with the Maui Forest Bird Recovery Project (MFBRP) reported his discovery on July 21. “I first heard what I thought might be a distant kiwikiu song. It then sang about ten times across a gulch in some koa trees. It dropped down into some kolea trees where it spent the next twenty minutes calling and actively foraging through the berries, bark, and leaves. I walked down into the gulch to get a closer look.”

Pezzillo looked for the bird’s unique leg bands and sure enough, it was a male bird designated as wild #1 (the first male kiwikiu captured in Hanawi Natural Area Reserve on the windward side of Haleakalā for the 2019 translocation).

During the October 2019 kiwikiu translocation, seven wild kiwikiu were released into the NAR. This was part of a larger effort to establish kiwikiu in newly restored forests and to expand the available habitat for the species to help prevent their extinction. Kiwikiu are the rarest forest bird on Maui with a population that may number fewer than 150.

The translocation did not go as hoped. The effort was thwarted by the encroachment of avian malaria, which is spread by non-native mosquitoes. Wet, warm weather brought record numbers of mosquitoes to the release site that fall and most of the birds died from the disease. Climate change is fueling the spread of avian malaria and conservationists are trying to save the kiwikiu while the landscape is literally shifting under their feet.

Five of the seven wild translocated kiwikiu were found dead. For more than a year and a half scientists assumed the remaining two birds were dead – felled by the disease that killed the others. Researchers continued tracking #1 for two months but after losing the signal from his tracking device and after ground searches failed to turn him up, the team decided to leave the release site.

Dr. Hanna Mounce, MFBRP Coordinator said, “This bird has been exposed to disease, as the others were, and has somehow persevered. This is an amazing sign of hope for the species as we still may have time to save them. Work needs to continue avian disease and mosquito control as the rate of survival from malaria is low overall for this species with only one in seven surviving. This is a hopeful sign that a population of kiwikiu and other native forest birds could survive in restored landscapes in the future, especially without mosquitoes and disease.”

The DLNR Division of Forestry and Wildlife (DOFAW), together with a whole host of partners, has been working on restoring the native ecosystems of leeward Haleakalā for decades, by planting more than 450,000 native koa, ‘ōhi‘a, and other species in the last decade.

“Our restored forests are working,” said Scott Fretz, DOFAW Maui District Manager. “For this one kiwikiu to survive, alone for over 600 days, shows those ecosystems can function again. This is exciting news as we press forward to protect and replant the missing pieces and re-weave the green mauna lei so that one day the birds will move on their own.”

David Smith, DOFAW Administrator, commented, “In a different world, we wouldn’t have to manage the romantic life of one bird, or move birds to save them, but this is what people have created and what we inherited. The survival of this single kiwikiu doesn’t change the overall plans for saving the species. Preventing their extinction is the goal of the entire program. #1 shows us that if we have a good, safe habitat for this, they want to survive.”

The Kiwikiu Working Group, comprised of experts from a dozen organizations and agencies, revisited and revised their plans after the 2019 translocation attempt.

Mounce concluded, “We will carefully analyze what led to the survival of #1, but it’s much too soon to say whether this will change our options for trying to save kiwikiu. We thought we had lost all the translocated birds to malaria,  but this one’s survival has given us hope and encouragement, that maybe, just maybe, we can save this incredible species before it’s too late.”