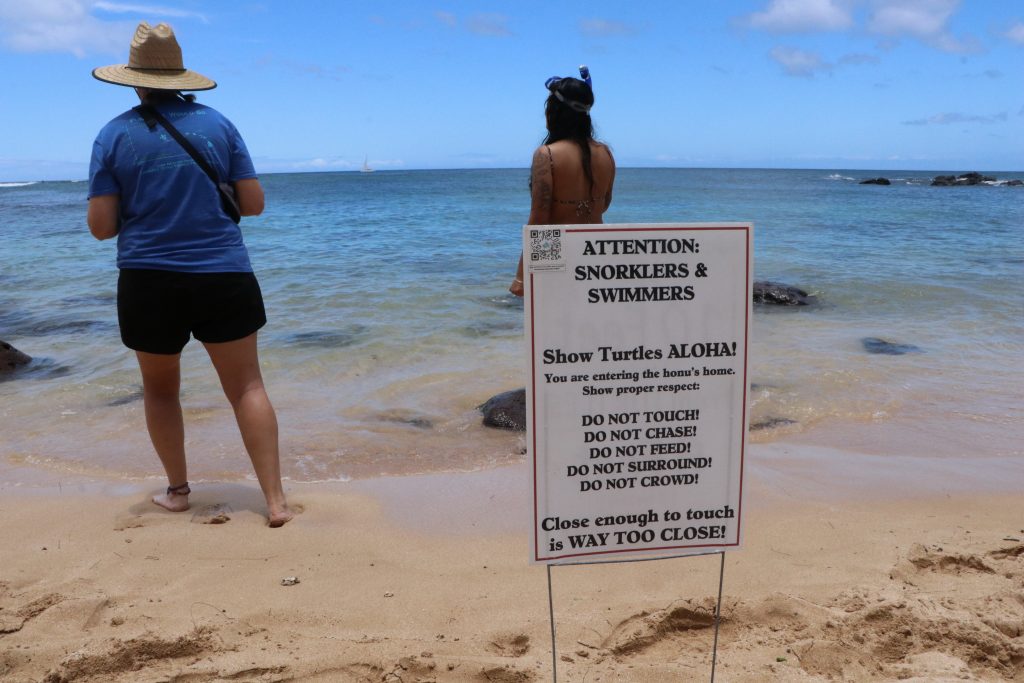 (HONOLULU) – First and foremost, Debbie Herrera the Volunteer and Education Coordinator for Malama na Honu, believes we need to shift the narrative.

“The vast majority of people who come to Laniakea, on O‘ahu’s north shore, pay attention to the signs put up by volunteers from the group. We’re trying to focus on people behaving in pono ways, rather than those very few who refuse, despite dozens of cautionary signs or warnings from volunteers, to give green sea turtles on the beach or in the ocean wide berth,” she said.

Laniakea has long been a focal point for wildlife viewing…both the good and the bad. Malama na Honu has been around since 1999 and has more than 100 volunteers watching over a local turtle population that also exceeds 100 individuals. The post-pandemic surge in tourism has sharpened the focus, with social media posts showing people getting too close to turtles or touching them – all for a prized photograph or video to share with friends and family.

Herrera believes incidents of inappropriate behaviors around turtles and Hawaiian monk seals will diminish after the current surge in tourism subsides. Yet, she and her squad of volunteers will remain on the beach every day, answering questions and educating people about proper viewing etiquette for marine wildlife in Hawai‘i.

After several recent reports of visitors slapping a seal or people touching or harassing turtles, Gov. David Ige declared violators will be fully prosecuted of the law. The key, according to DLNR Division of Conservation and Resources (DOCARE) Enforcement Chief Jason Redulla, is catching them in the act.

“On one hand social media posts are a valuable investigative tool, but they only go so far. Often, it’s hard to determine time, place, and people from a post,” Redulla explained. After news reports highlighted two recent harassment cases, DOCARE’s tip application and 24-hour reporting hotline blew up with reports from community members. “Many of them reported what we were already actively investigating, but it reveals how strongly these types of behaviors elicit community outrage and concern.”

Though DOCARE officers have hundreds of miles of beaches to patrol, along with State forests and parks, the division has assigned officers to have a presence more regularly at Laniakea.

“It’s more of a deterrent than a way to catch someone doing something illegal. Typically, if there’s a uniformed officer standing on the beach, people are not going to break the law in front of them. We can’t provide 24-hour coverage on one beach, and this is why we rely on actionable information (things that can help law enforcement identify the responsible person) from people who spot unlawful wildlife encounters,” Redulla added.

Herrera agrees that having law officers standing by, almost always means a scofflaw is not going to break the rules. She also thinks the surge of tourists trying to capture up close photos of turtles and monk seals is going to abate in time and that will lead to fewer cases of misbehavior and the need for continued enforcement presence.

Green sea turtles, Hawaiian monk seals, and many other marine animals are protected by a variety of federal and state laws. Anyone who observes what they believe is illegal behavior is encouraged to report it immediately in one of the following ways:

DLNR, federal partners like NOAA and the U.S. Fish and Wildlife Service, the Hawai‘i Tourism Authority and non-government organizations like Malama na Honu continue to explore additional ways of reaching large numbers of visitors to educate them about safe wildlife viewing.