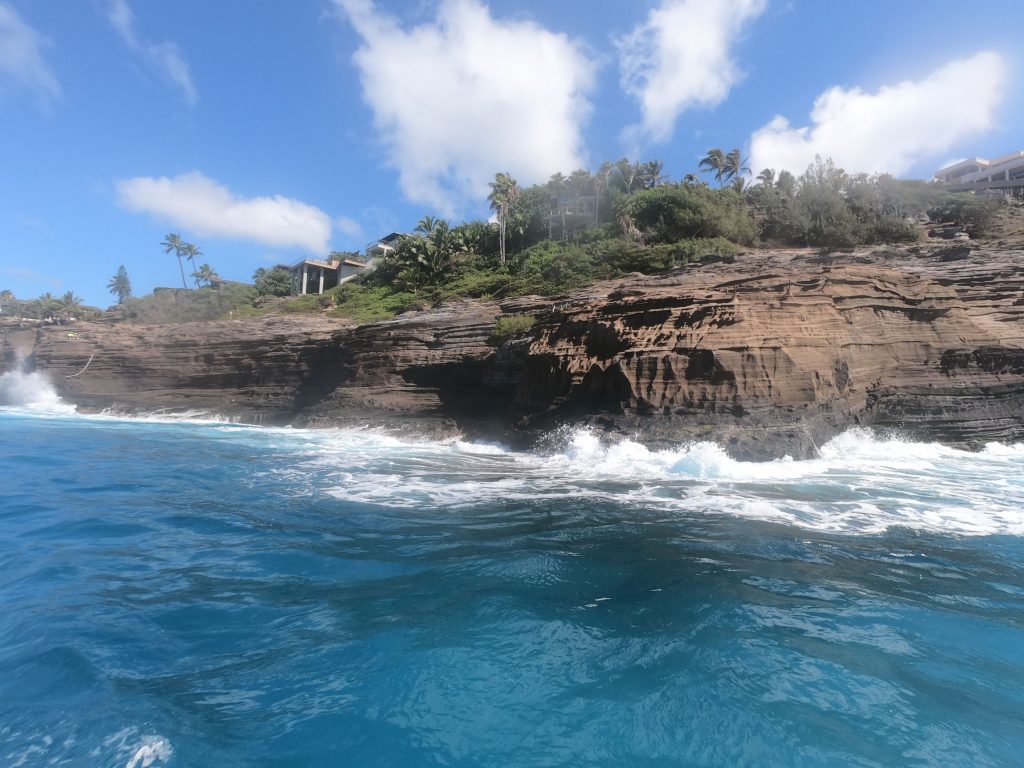 Dramatic video captured today during a routine patrol by DLNR Division of Conservation and Resources Enforcement (DOCARE) officers demonstrates the risks and dangers people face when jumping into the water.

The City and County of Honolulu Emergency Services Department reports 17 ocean-related emergencies, including drownings, around the cliffs on the east side of Maunalua Bay so far this year. The latest call was Tuesday evening. That’s the most since 2015 and there are numerous undocumented rescues performed by fishermen, surfers, and lifeguards.

This morning a major south swell brought water crashing onto the cliffs and created a wash machine-effect as people peered down from above China Walls on the maelstrom. Only one person appeared to be in the water.

DOCARE Office Vance Lime said, “Once someone gets into trouble and panics in the water below China Walls, currents can carry them all the way to Diamond Head. Hidden below the surface is a jagged reef and people can easily get tossed around and seriously cut up. A lot of people get into trouble because they can’t fight the power of the swells.”

Today Lime, and fellow DOCARE Officer John Pang, watched as incoming waves doubled-up and increased from a two-foot swell to an eight-foot swell backing up onto the rocks with the potential of sweeping anyone standing on the rocks above into the ocean.

Spitting Cave was living up to its name, as ocean water forced into its mouth was expelled in great torrents of water. There are numerous sea caves along the coastline here and a feature called “The Bridge” where people have been swept off and into the ocean. The DOCARE officers also pointed out Witches Brew and Toilet Bowl in Hanauma Bay where swimmers and snorkelers have encountered danger in the past.

DOCARE Chief Jason Redulla commented, “With tens of thousands of visitors now back in the islands, it’s really important that people, including residents, understand the ocean can be deadly. The rock shelves and caves from Maunalua Bay to Hālona Blow Hole are particular danger spots on the island of O‘ahu and even though guidebooks and sites may promote them as fun places to visit, we want people to understand that even for the strongest swimmers they can be deadly. There are safer places to enter the ocean and we encourage people to be armed with information and common sense.”