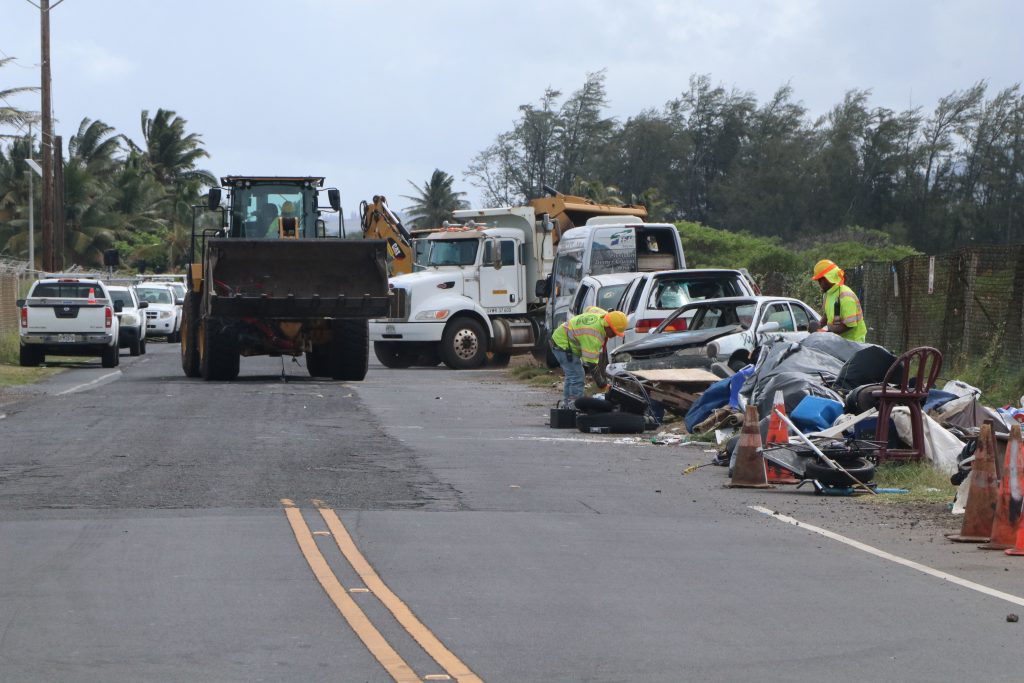 Supported by a large team from contractor HTM, clean-up crews moved from the road into the Kanaha Pond State Wildlife Refuge, which has been severely impacted by the large presence of people living on Amala Place.

Sasha Smith, a forestry technician with the DLNR Division of Forestry and Wildlife (DOFAW), manages the sanctuary for native and migratory birds. She directed crews to camps, some quite extensive and elaborate, concealed in naupaka on the makai side of Amala Place.

Smith detailed the challenges and issues, associated with a large human presence right next to the sanctuary. “Probably for the last decade people have been impacting the natural resources of the bird refuge, but over the past year, it’s gotten much, much worse,” she said. Smith has been unable to do any work, like removing invasive weeds, because people have set up camp right next to the protective fence around the 150-acre sanctuary.

DOFAW  is working with the the county on this week’s clean-up to help address impacts of the illegal camps on the wildlife sanctuary. Scott Fretz, DOFAW Maui Branch Manager, pulled Smith and other workers out of the sanctuary for their own safety. “There have been incidents where our staff have been harassed, unauthorized entry into the sanctuary, and vandalism.” Fretz commented.

“We are also concerned about the potential health hazards in the area from trash and waste thrown over the fence and into Kanaha Pond, which is one of the most important breeding habitats in the state for endangered waterbirds”. The protective fence surrounding the sanctuary has been damaged allowing predators like feral cats and rats to go after birds. Smith reports coming across drug paraphernalia, needles, and other potentially dangerous items.

The pond is also an important wintering area for numerous migratory birds that breed in northern climates like Alaska and then annually fly across the Pacific to Hawai‘i.

On Monday, Lt. John Yamamoto of the DLNR Division of Conservation and Resources Enforcement (DOCARE) and his officers posted a half dozen camps in the bushes next to the beach, warning people they’d need to move today. They encountered at least two illegal campers who were told to leave before the contract crews and heavy equipment moved in to begin loading up all variety of stuff.

Yamamoto said, “We all have compassion and empathy for people who are down and out. However they need to realize that an ecologically-sensitive wildlife sanctuary is not the place to set up permanent camps, to trash them, and to impact native birds.”