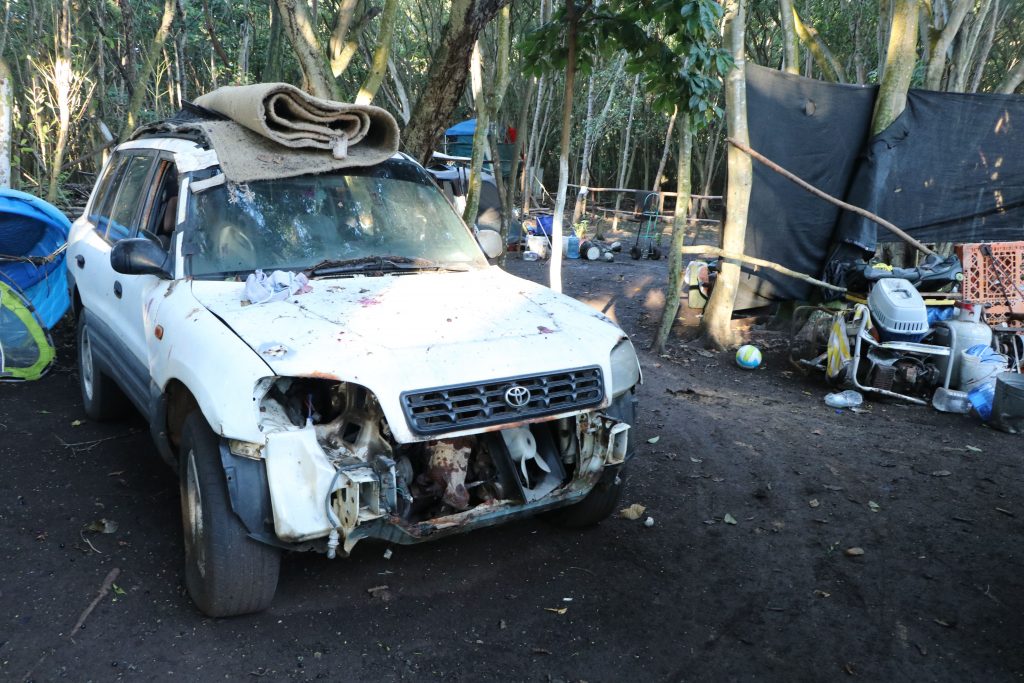 More than a month ago they were warned by the DLNR Land Division to vacate the property, which is adjacent to the former Coco Palms Resort and tucked into a neighborhood with homes directly across the road.

Kauai district land agent Alison Neustein said everyone involved in today’s operation has empathy for people who find themselves houseless. “However, State conservation lands are clearly not the place for these large encampments. For example, the Koki Road site is in a flood zone, so it has potential human safety issues.” Neighbors report during flooding in 2018 water was half-way up the sides of their homes.

Over the past year, DLNR has received several complaints about the encampment. Neighbors, on a hill overlooking the encampment had complained about noise and smoke from campfires. Neustein notes there are no sanitary facilities on the land, though the campers had brought in portable toilets and put up a shower house. She added one resident had to shut off her water service after getting extraordinarily high bills and suspected one of the campers was stealing her water.

More than a dozen officers from the DLNR Division of Conservation and Resources Enforcement (DOCARE) and State Sheriffs oversaw the operation. They pitched in to help some campers get their heavier personal belongings up to the road. Campers kept what they wanted and identified items that will be stored for 30 days before disposal, if unclaimed. A trio of DOCARE officers even used a portable pump to inflate the tires on one car so it could be driven out of the area.

As contract work crews loaded up trucks with rubbish and materials the campers didn’t want to keep, several of the workers taped eviction notices and additional no-trespassing warnings to the guava trees in the camp. The complete cleanup of the parcel is expected to take all week.

Other than a few verbal disputes between campers the eviction was peaceful. One activist who’d announced his intention to enter the closed area was cited by DOCARE officers and then left the area.

“We all understand how difficult and expensive it is to find housing on Kauai, though some of these folks have refused offers of shelter or transitional housing and will likely show up elsewhere. We have to do our jobs and uphold the laws and rules which preclude these encampments on public lands,” Neustein said.