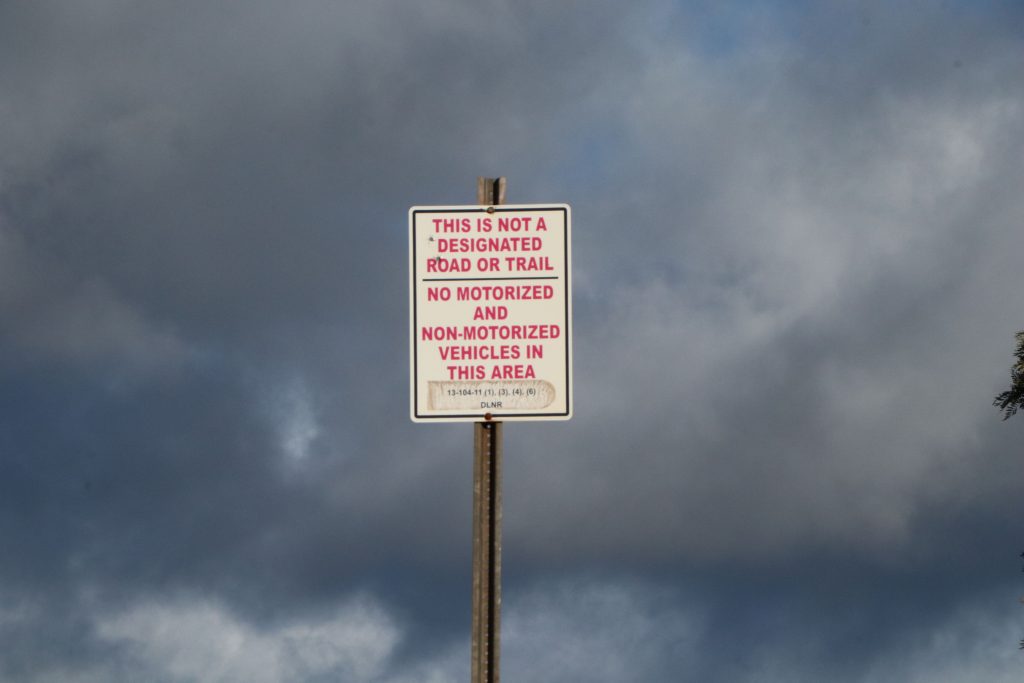 (Līhuʻe, Kaua‘i) – Nearly every weekend, the distinctive sound of four-stroke dirt bike engines fills the air along with red dust, between Koke‘e State Park and Kekaha on both sides of Highway 552.

Places like ‘Koke‘e bowl’ often see dozens of people on dirt bikes, mountain bikes, and all-terrain vehicles racing across trails that their tires have carved out. Warning and no-trespassing signs are evident throughout the area.

Sheri S. Mann, the Kaua‘i Branch Manager for the DLNR Division of Forestry and Wildlife (DOFAW) has empathy for local riding enthusiasts who complain they have few legal places to ride on the Garden Island.

“However, these activities on lands under DLNR jurisdiction, under the Agribusiness Development Corporation (AGC), and the Dept. of Hawaiian Homelands (DHHL) is illegal, and the signage clearly states that” Mann said.

And dangerous. Keiki on dirt bikes or quads have been seen crossing the highway, which has a lot of blind curves. Riders are crossing into safety zones that are established in hunting areas, where Mann says mixing speeding bikes with people carrying guns could be a recipe for a tragedy.

A firebreak, created by DOFAW, to keep wildfires from jumping across the highway has become a popular raceway. “This was created for the specific purpose of protecting life and property and not as a dirt bike track,” Mann said.

Numerous no-trespassing signs have been vandalized or taken. Some bikers are also setting up small encampments on Saturdays and Sundays on state lands. In addition to the obvious dangers of bikes cruising through active hunting areas, land managers are concerned that the bikers may be spreading invasive species, and their tailpipes or open fires in large metal cans could spark a wildfire in this typically very dry vegetation in that side of the island.

Dirt bikers caught riding on DOFAW, or State Parks managed lands could be cited by officers from the DLNR Division of Conservation and Resources Enforcement (DOCARE). DOCARE has responsibility for enforcing all rules and laws on lands under DLNR jurisdiction.

“On Kaua‘i, the demand for recreational access and uses far out-weighs the available land on our small island. We cannot accommodate destructive or dangerous uses, as we have an obligation to protect the natural and cultural resources on all lands under our stewardship,” Mann said.