Hawai‘i Police Department and DOCARE Are Four for Four 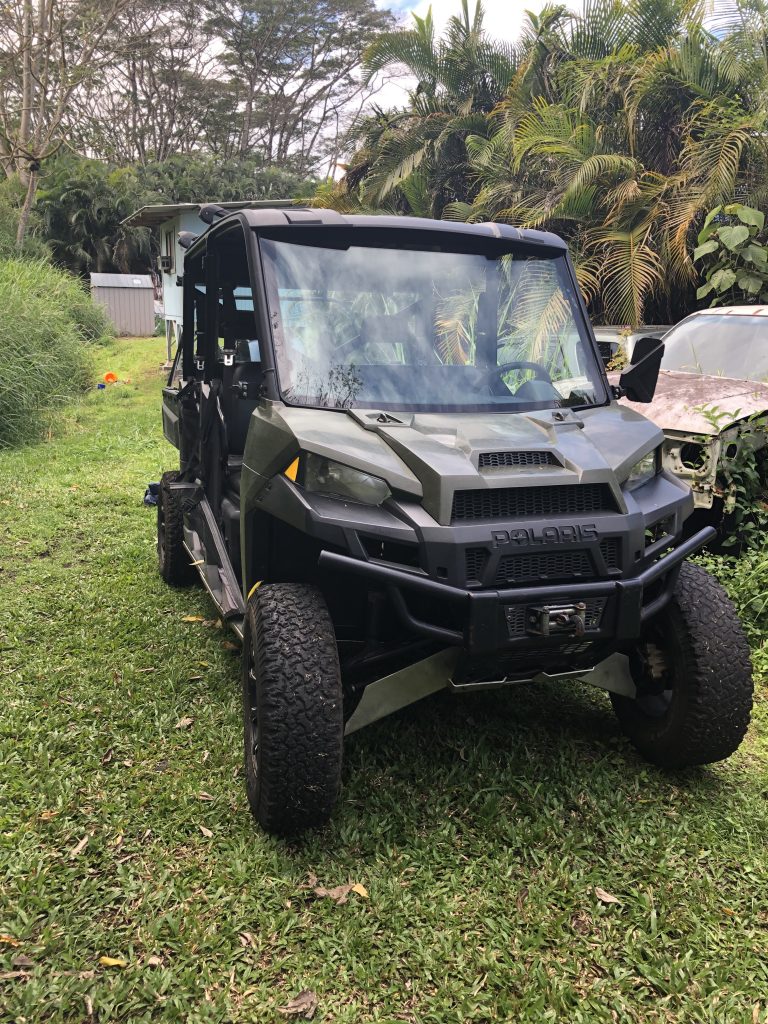 (HILO ) – Two trucks, a utility task vehicle (UTV), and a tilt trailer stolen from a DLNR Division of Forestry and Wildlife (DOFAW) base yard last November, have all now been recovered. Today a joint task force from the DLNR Division of Conservation and Resources Enforcement (DOCARE) and the Hawai‘i Police Dept. (HPD) recovered the $18,000 UTV from a property in the Puna district.

Previously, investigators found the two trucks, a 2008 Toyota Tacoma, a 2018 Ford F350, and the 18-foot-long trailer. The value of the stolen vehicles and the trailer exceeds $130,000. Thieves also took 140 individual items when they broke into the portion of the Hilo facility that supports the work of the Mauna Kea Forest Restoration Project (MKFRP).

Nick Agorastos, a supervisor with the DOFAW Hawai‘i Branch and a co-worker were with officers when the vehicle was recovered. “We are very happy to get it back. The loss of the trucks, trailer, UTV, and other equipment would have set the project back a few years and likely would have reduced its capacity to host tree planting volunteers, community groups, and members of the public during the upcoming planting season. The joint effort between DOCARE and HPD is to be commended,” Agorastos said.

The $70,000 Ford truck was recovered in January and HPD arrested two suspects. Officers have not been able to locate the dozens of items also taken during the break-in. The equipment represents virtually everything restoration project staff utilize in the field regularly. The stolen items include packs, tools, chain saws, first aid kits, raincoats, fire extinguishers, coolers, water cans, and fuel cans.

DOCARE Chief Jason Redulla also had high praise for the successful recovery of the four largest and most costly items. “We’re pleased our combined efforts resulted in more than one hundred thousand dollars-worth of vehicles being returned to the forest restoration project. When criminals steal from government facilities, they’re stealing from all of us. It’s heartening that the important work the MKFRP conducts on the highest mountain in Hawai‘i has not been hamstrung by these thieves.”

The investigation is continuing, and no other arrests have been made. Anyone with information about this crime is encouraged to call the DOCARE Hotline at 634-DLNR, HPD at (808) 935-3511, or submit an anonymous tip via the free DLNRTip app.