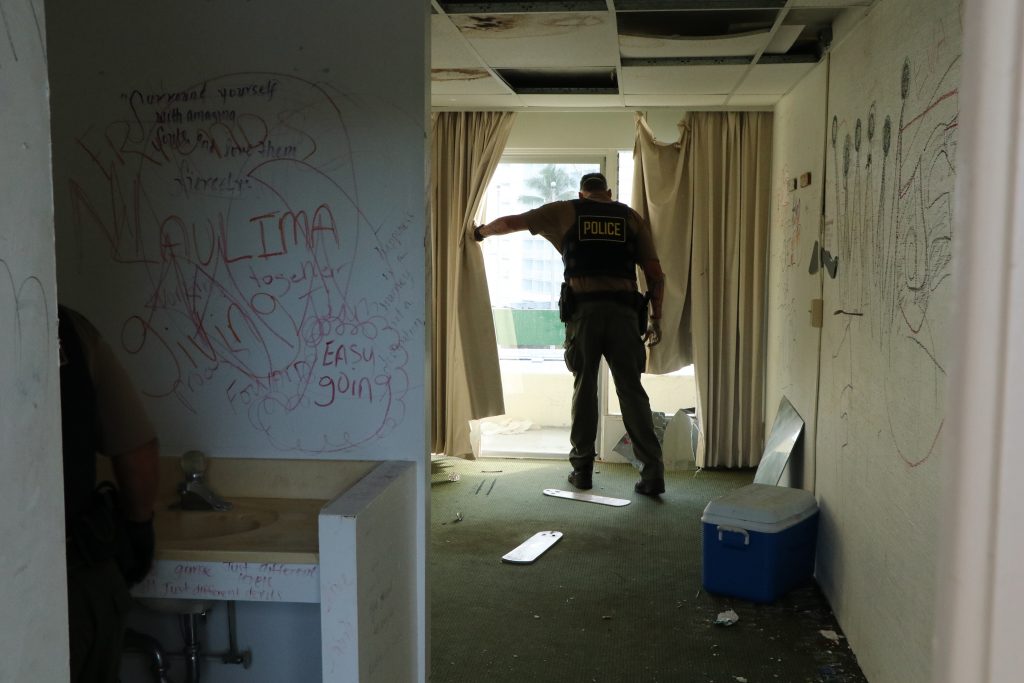 (HILO) – Officers from three law enforcement agencies conducted a dawn sweep of all 146 rooms at the former Uncle Billy’s Hilo Bay Hotel this morning. While the 15 officers did not find anyone on the property, there was evidence, in many of the rooms, that they’d been recently occupied.

The iconic hotel was condemned by Hawai‘i County authorities for its unsafe condition. It is under the jurisdiction of the DLNR Land Division, which is in the process of soliciting interest from developers to renovate the salvageable buildings on the property and demolish those that are beyond repair.

People who had been living in the hotel’s rooms had been notified that law enforcement would be coming in to clear it. A private security company is being contracted to provide 24-hour security, and DLNR is investigating the possibility of putting permanent barriers up until a new lease for the property is issued.

Officers from the DLNR Division of Conservation and Resources Enforcement (DOCARE), the Hawai‘i County Police Dept. and the State Dept. of Public Safety Sheriffs Division teamed up to search each room.

In many, they found trash, clothing, and bedding scattered everywhere, with graffiti scrawled on doors and on both interior and exterior walls. The interior of the hotel is considered a public health hazard and people are cautioned to stay out.

DLNR District Land Agent for Hawai‘i Island, Gordon Heit, encountered homeless individuals living on the property previously and had things thrown at him. He was on the property this morning to provide support for the law enforcement operation, as were homeless service providers, in case anyone was found still living in the hotel.