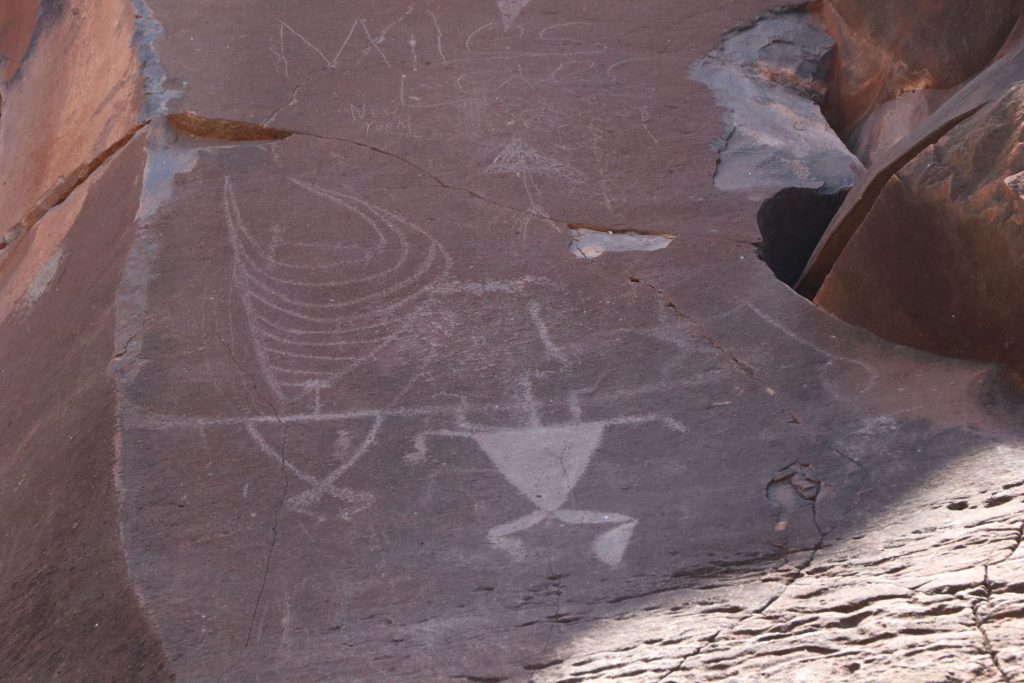 (OLOWALU, MAUI) – From a distance, it appears a flock of birds left their collective droppings all over a cliff face that holds some of the finest examples of Hawaiian petroglyphs. Also known as Pu’u Kilea, there are about 100 petroglyphs spread across the face of the basalt cliff in the Olowalu Valley.

The DLNR Division of Conservation and Resources Enforcement (DOCARE) was notified of serious vandalism last Tuesday, after someone with a paintball gun fired shot after shot onto the dark cliff. Now, officers are asking for help to try and identify the person or persons who damaged this important cultural site.

“I would guess several hundred paintballs were shot at this historical site,” said DOCARE Lt. John Yamamoto. He said the “attack” appeared random and the paintball gun was likely fired from down on the road. “White and yellow splotches of paint are spread across nearly the entire cliff face from the top to the base and from one side to the other. A great battle happened in this Ahupuaʻa and it’s hurtful to see this kind of disrespect for our culture,” he added.

According to online accounts, in 1790, an American ship opened fire on Hawaiian canoes. More than 100 men were killed and another 200 were hurt. The massacre led to retribution when the next western ship arrived and its entire crew was attacked and killed, except for one man, who later became an advisor to King Kamehameha the Great.

The Pu‘u Kilea rock art includes human and animal figures, canoes and sails. The site has been vandalized in the past with graffiti and unfortunately the paintballs landed on some of the petroglyphs. The images, or ki’i pohaku, chiseled into the rock are estimated to be more than 300-years-old. The petroglyphs are believed to represent legends or stories of the early Hawaiians.

The vandal(s) could face charges of criminal property damage, in addition to civil penalties, and Lt. Yamamoto hopes anyone with any information will come forward. “This is so sad to see. Like many others, I visited this place when I was a young boy. Anyone with information can call DLNR here on Maui at 873- 3990.  We do work seven days a week, holidays included.”

Anonymous tips can also be called in to the 24-hour DOCARE hotline at 643-DLNR(3567) or via the DLNRTip app, downloadable for free on Android and Apple devices.