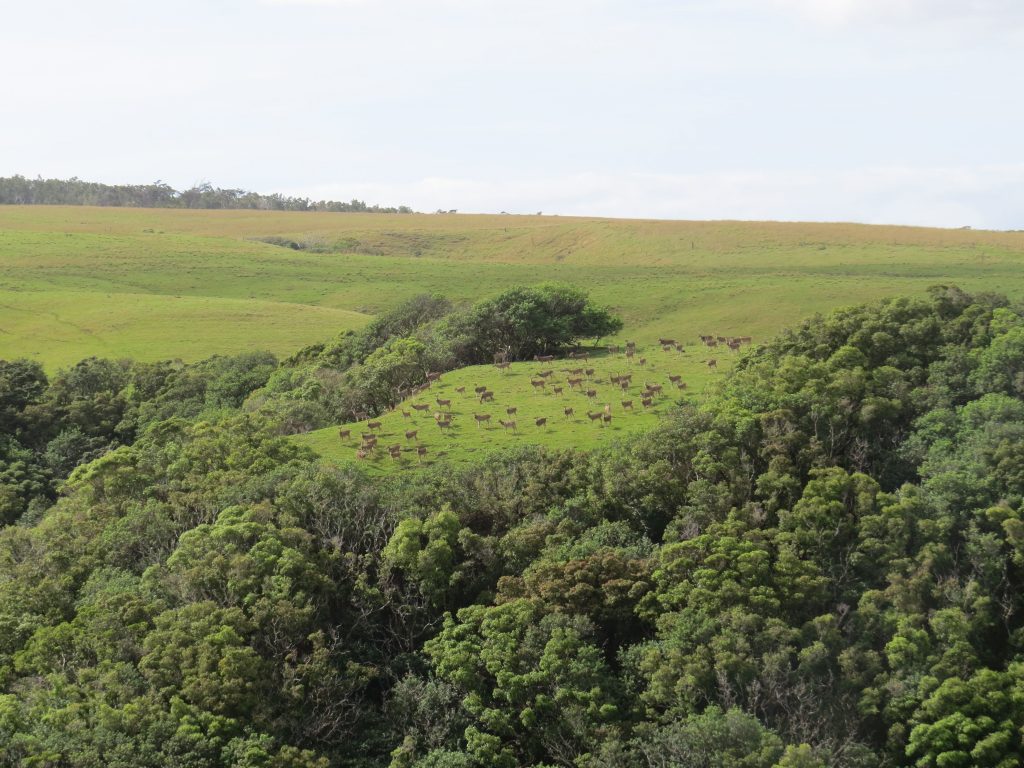 (KAHULUI) – Only one of the islands, comprising Maui Nui, is free from hooved animals. The 32,000-acre Kaho‘olawe no longer experiences ungulate-caused deforestation and the loss of topsoil, after goats, sheep, and cattle were eliminated from the island.

On Maui and Moloka‘i, non-native axis deer continue to devastate private agricultural land and are pushing higher and higher into forested lands. At lower elevations their voracious appetites and extreme herd sizes are leaving some landscapes looking more like moonscapes.

“Cattle ranchers have been the hardest hit,” Espaniola explained. “They do their part in rotating the use of pasture lands to prevent overgrazing by moving their cows around. Unfortunately, the deer remain, and they devour any living vegetation, which doesn’t allow for plant regeneration.”

The non-native forest around the airport on Moloka‘i is a stark example of this. Every single tree here is devoid of greenery. In heavy rain events, which Hawai‘i has experienced repeatedly  over the past month, the lack of groundcover and healthy trees to slow rain penetration into the ground has created excessive runoff which makes it down to the ocean and onto near-shore reefs. After a big rain last month, waters along the south shore of Moloka‘i were chocolate brown, hundreds of feet seaward.

The overpopulation of axis deer is having its greatest impact on agricultural lands, some of which are adjacent to State Forest lands. “Axis deer are spreading further into the deep valleys and remote ridges, where they trample and eat plants. They spread invasive weeds, “ said DLNR Chair Suzanne Case. “We need to protect our native forests because they capture rain and cloud moisture, replenishing freshwater streams and underground water sources. When hooved animals, all of which are not native to Hawai‘i but were introduced by foreigners, turn these ancient forests into bare ground, the steep mountainsides rapidly erode which deposit mud on beaches and coral reefs,” Case added.

One of the most effective ways to keep axis deer out of forests is fencing. 111,000 acres of Maui Nui is fenced, and while these continue to be mostly effective, many were built decades ago and are only four-foot high, built originally to keep pigs and goats out. Axis deer can easily jump them and are increasingly gaining access to those areas, so now DLNR and its partners are retrofitting existing fences to be eight-feet high.

Scott Fretz, the DOFAW Maui Branch Manager remarked, “Protection of the state’s native ecosystems and watersheds is our core mission and we currently have more than 100,000 acres of those lands fenced with effective deer control in place. However, that still leaves a lot of lands outside our management areas in need of better control. This is especially true for lower elevation areas where deer impact communities and agriculture and cause erosion that fouls marine habitats. Solving that bigger problem is going to take broad collaboration with stakeholders. The renewed efforts of the Maui Axis Deer Task Force led by Maui County Council Member Yuki Lei Sugimura are a very positive step in that direction.”

Fretz points out that increased control efforts in West Maui have been successful in reducing population numbers in targeted areas.

For hunters, there are currently no limits on how many axis deer they can take. DOFAW is encouraging hunters not only to focus on bagging trophy bucks, but to help cull doe out of the large herds. A recent UH study modeling axis deer populations in Hawai‘i found, “On Maui, the axis deer populations are female-biased, comprising as much as 70% individuals…effectively reducing axis deer will most likely require an annual removal of approximately 20-30% of the population with a greater proportion of females to increase population decline.” The study was funded by the U.S. Geological Survey Invasive Species Program.

Espaniola concluded, “In order to get to that manageable population size it’s going to involve the State and entire communities. A lot of people are working on this problem, and we are beginning to see better progress.”