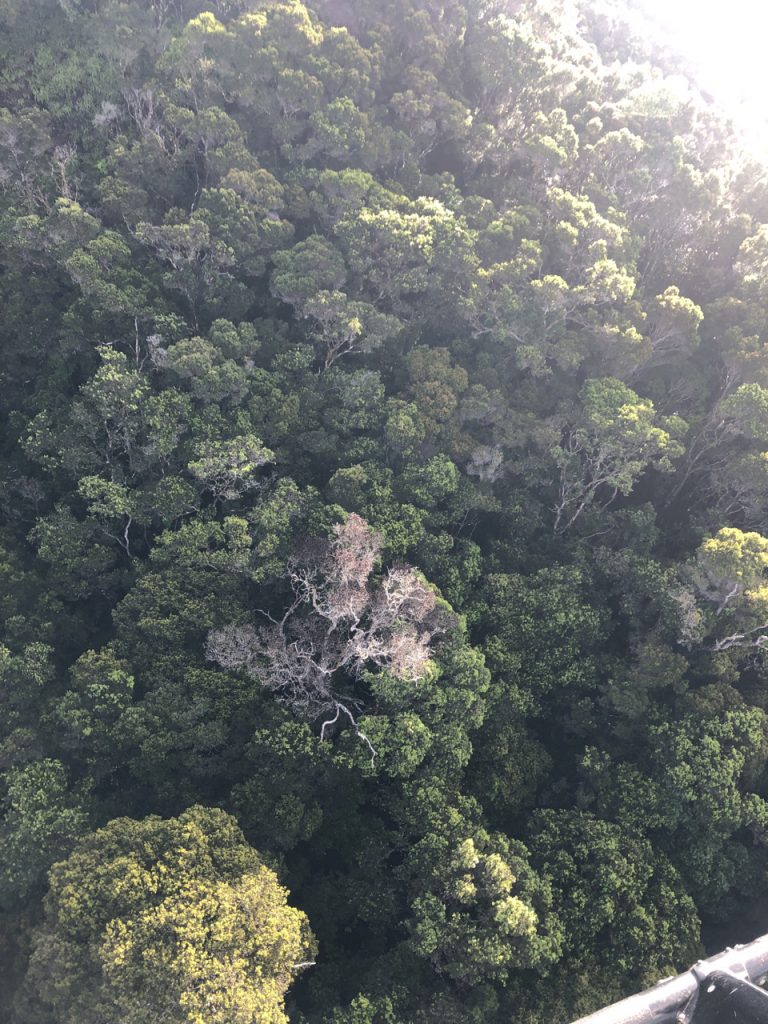 (LĪHU‘E) – Almost four years after Rapid ʻŌhiʻa Death (ROD) was first detected in a lower-elevation forest in northeast Kaua’i, the fungus known to exclusively infect ʻōhiʻa has been found in a dead ʻōhiʻa in the pristine wilderness area of the Alakaʻi at 4,100-feet elevation.

“We spotted this tree during our regular helicopter surveys late last year,” Mapuana O’Sullivan. Kauai Forest Management Supervisor with the DLNR Division of Forestry and Wildlife (DOFAW) Kaua‘i Branch, said. “Because the area is one of the most biodiverse on the island, home to numerous native flora and fauna and critical to our watershed, we quickly returned on foot to take wood chip samples.”

It wasn’t the first time an ʻōhiʻa with a canopy of reddish-brown leaves, symptoms consistent with Rapid ʻŌhiʻa Death, was spotted in the area during helicopter surveys. In the past four years, about 60 trees on the Alakaʻi Plateau have been tested. This is the first time a tree tested positive. What’s more, laboratory testing by the USDA Agricultural Research Service in Hilo revealed the tree died of the more virulent of the two fungal pathogens known to cause Rapid ʻŌhiʻa Death—Ceratocystis lukuohia.

ʻŌhiʻa are the most abundant native tree in Hawaii’s forests and found only in Hawai‘i and nowhere. There’s currently proposed legislation to name ʻōhiʻa as the Hawai‘i State Endemic Tree. There’s also legislation proposed for additional ROD rapid response and management funding.

“We’ve been preparing for this day, sad as it is. Our preferred method of management would be to cut the tree down,” OʻSullivan said. “This reduces movement of the fungal pathogen in wind.”

Since fresh wounds serve as entry points for the fungus it was decided not to cut down the infected tree as it may damage nearby healthy ʻōhiʻa in the process. Instead, the Kauaʻi ROD Rapid Response team is turning to a new approach, one that if successful, could be used across the state, especially in areas where the disease has not invaded broadly.

“The idea is to keep beetles from burrowing into the dead ʻōhiʻa,” Tiffani Keanini, Manager for Kauai Invasive Species Committee said.“When ambrosia beetles tunnel into diseased trees, they produce a wood powder that can include live Ceratocystis spores. This is how the fungus is released into the environemnt. So, we’re applying an environmentally-friendly beetle repellent to the bark of the tree that’s basically a “no vacancy” sign, telling beetles the tree is fully occupied and no longer suitable to colonize.”

The repellent does this by mimicking a natural odor signal produced by beetles. Previous studies of another beetle-transmitted disease elsewhere suggest this may be an effective strategy to repel ambrosia beetles associated with Rapid ‘Ōhi’a Death, especially in areas with only one or a few diseased trees or where felling is not feasible.

On Hawaiʻi Island, where more than a million ʻōhiʻa have died of this fungal disease, researchers are finding one of the best ways to prevent ʻōhiʻa from becoming wounded and, potentially, infected is ensuring hoofed animals are not in pristine forested areas. Ungulate-proof fences are becoming more important in protecting wilderness areas critical to native flora and fauna and watersheds.

In the coming weeks, the rapid response team, made up of state and federal agencies and non-government organizations, will continue to sample ‘ōhiʻa in the Kōkeʻe area and elsewhere around the island.

To learn more about Rapid ‘Ōhi‘a Death, visit www.rapidohiadeath.org or sign up for the Kaua‘i newsletter—‘Ōhi‘a: Tree of Life—at www.kauaiisc.org.