Native to the West Indies and the northern coast of South America, introduced intentionally to Hawaii for as an ornamental and for its fruit. On Kauai, individual small populations have been found in Lawai, Poipu, and Aliomanu. KISC is treating opportunistically with landowner permission. On Molokai, it is present in Halawa Valley. MoMISC is working to eradicate this species. On Oahu, this species is known from cultivation at experiment stations in Honolulu and Haleiwa. Not currently an OISC target. Landowners are asked to remove this pest and replace with a non-invasive alternate.BIISC is working to control small populations also occur on Big Island. 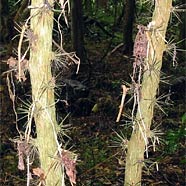