Disbursement of project funding via the HISC ensures that, at the cabinet level, multiple state agencies are identifying and prioritizing actions on annual basis that might otherwise go unfunded. 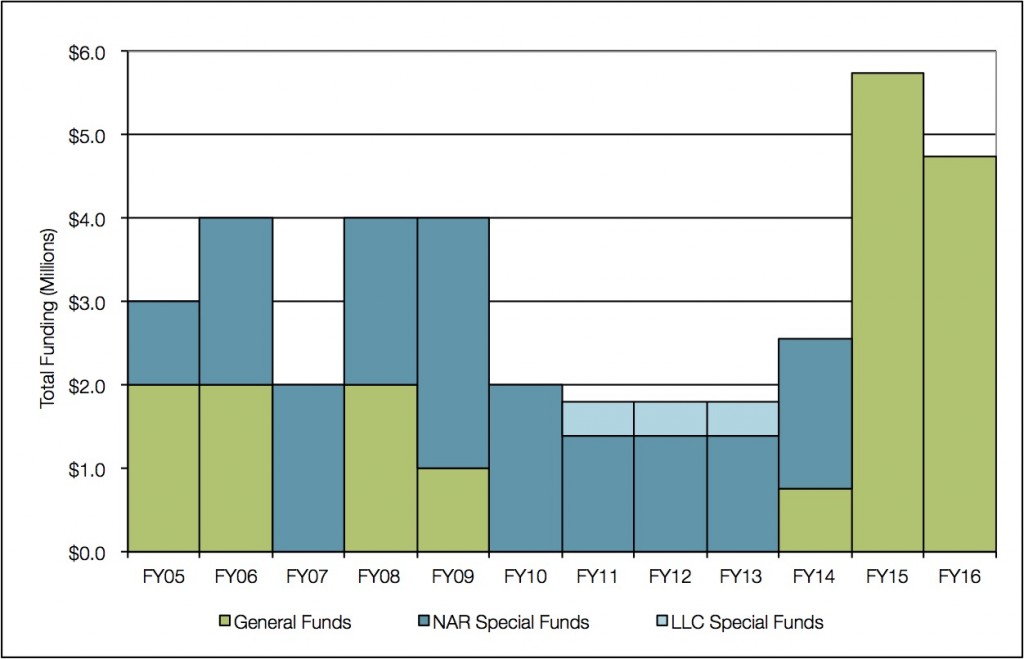 FY05 (July 1, 2004-June 30, 2005) was the first year that funds were provided to the HISC, which is administratively housed with the DLNR Division of Forestry and Wildlife. The stated intent of the Governor at the time was a budget of $5M in general funds, to fill gaps in capacity within and between departmental projects. As the amount of available general funds available fluctuated over time, the DLNR, as administrative host to the HISC, has in the past supplemented general funds with special funds from the Natural Area Reserve Fund, which received revenues from the conveyance tax levied on the sale of property in Hawaii. Due to a lack of general funds available during the economic downturn between FY10 and FY13, the HISC temporarily received funding from the Legacy Land Conservation Program. General funds from the legislature were provided in FY14, and in FY15 the HISC was entirely supported by general funds. Though funds are administered through DLNR, all HISC funding is approved by the interagency Council.

A call for proposals for applicants of HISC funds is released annually in late spring. HISC funds are currently available to government agencies and the UH system. For review purposes, applicants identify one of the HISC Working Groups to which their proposal should be directed based on topic (e.g., prevention, control, outreach, etc.). Proposals are then discussed at informal working group meetings. A quantitative review committee then scores the proposals and collaboratively develops a recommended budget to propose to the Council. The Council, at a  public meeting, reviews the recommended budget and has the opportunity to reject, amend, or approve the budget.